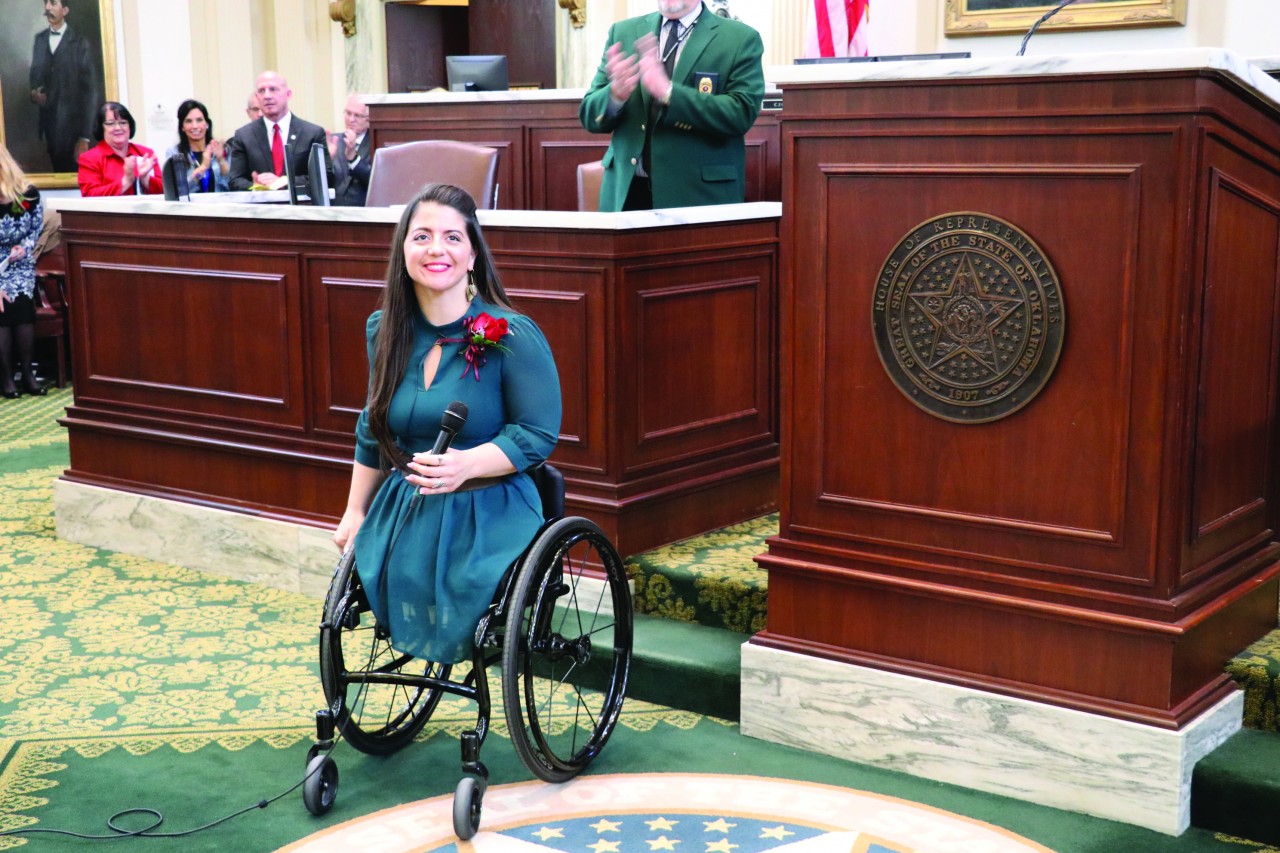 On a foggy and cold Wednesday morning, despite the dreary and frigid weather conditions, more than 1,000 pro-life faithful flocked to the Oklahoma State capitol building for the 29th Annual Rose Day Pro-life Rally.
The fourth floor rotunda of the capitol was full of rose colored masses proclaiming that each life, no matter how young, old, able bodied, or handicapped, is precious in the eyes of Jesus.
The event began at 9:30 a.m., Feb. 6 when pro-life advocates of all ages knocked on the office doors of their legislators at the State Capitol, presenting roses to encourage pro-life voting during the current session of Congress.
Following rose distribution, Oklahoma evangelicals packed into the House of Representatives to capacity, with overflow seating in the Senate across the rotunda.
To begin the rally, pro-life State Senate and House members were called by name and lined the front of the House of Representatives, signifying that they chose to fight for the rights of the Oklahoma unborn. Accompanying some representatives were their own children and grandchildren.
Children were a common sight at the Rose Day Rally. The voices of the “Little Light Choir” from Little Light Christian School filled the House chambers as the choir performed songs like “This Little Light of Mine.” Little Light Christian School is a school that provides a free, private education to children of incarcerated parents.
Those in attendance joined in song, causing emotional reactions from many in the audience.
One Oklahoman who has spent his lifetime being a voice for the voiceless was honored with the Rose Day “Pro-Life Champion” Award. Tony Lauinger, long-time Rose Day Committee member, was awarded the honor of “Pro-Life Champion” as tears filled his eyes and a look of shock covered his face. Anthony Jordan, the 2018 Award winner, presented Lauinger with the award.
Lieutenant Governor Matt Pennell then reassured all within earshot that the state of Oklahoma has a pro-life lieutenant governor, a pro-life governor and pro-life legislators, “Defending life will continue to be a priority in this building,” Pennell said.
He then introduced Governor Kevin Stitt saying, “(What) I respect more than anything in this man is that he is a great dad.”
Stitt, who earlier that week delivered his state of the state address in the same chambers, said, “Monday I talked about our state being top 10 as one of my goals. Pro-life is an issue that we want to be number one in.”
Governor Stitt referenced recent legislation passed in New York and proposed in Virginia, which made late-term abortions legal. Stitt said that there are only seven countries in the world that allow abortion past 20 weeks gestation, which puts the United States in the same category as countries like China and North Korea.
“I believe life begins at conception. Jeremiah 1:5 says ‘Before I formed you in the womb I knew you, before you were born I sanctified you.’ So God, our Creator, recognizes that life begins in the womb. He knew every one of us before we were born.
“As a believer (and) as a father of six, protecting life is one of the reasons I ran for Governor. I want to make sure to work with our legislators and influence our supreme court to change things and move this forward. As your Governor, I will do everything I can to protect life in Oklahoma,” Stitt said.
Rally keynote speaker Jen Bricker told her story as the audience looked on in wonder. Bricker was born with no legs. Her biological parents left her in the hospital with no name and no family. Bricker told rally attendees, “By being here today, you all are supporting someone like myself, someone who couldn’t speak for themselves.”
Bricker said her biological mother didn’t know that she would be born without legs. She only had one ultrasound during her pregnancy. “You know that if there had been an ultrasound and they would have known, I would not be here today,” Bricker said.
Bricker grew up in an environment not unlike other children. At one point, a doctor told Bricker’s parents that she would never be able to sit up on her own. Her parents refused to accept that and went to another doctor.
“My dad asked this doctor to tell him one thing, ‘Will she ever be able to sit up on her own?’ To which the doctor replied, ‘She is going to do things that are beyond your wildest imagination.’” Bricker said from that moment on, her parents taught her to never make excuses, and that if she wanted to accomplish something she would need to work hard at it.
With this in mind, Bricker went on to do normal activities most children do, including roller skating. Eventually she would compete as a competitive power tumbler and win state in high school against able-bodied athletes. Ultimately, she would become an aerial performer for organizations like Disney.
Today, she still performs but primarily travels around the world, telling her story and how her parents chose life for a little girl they had never met.
“This really shines light on my parents, who are the true heroes,” Bricker said. “So if you’re here today but you’re wondering why, you have a purpose. You are here for a reason; you are not an accident.”