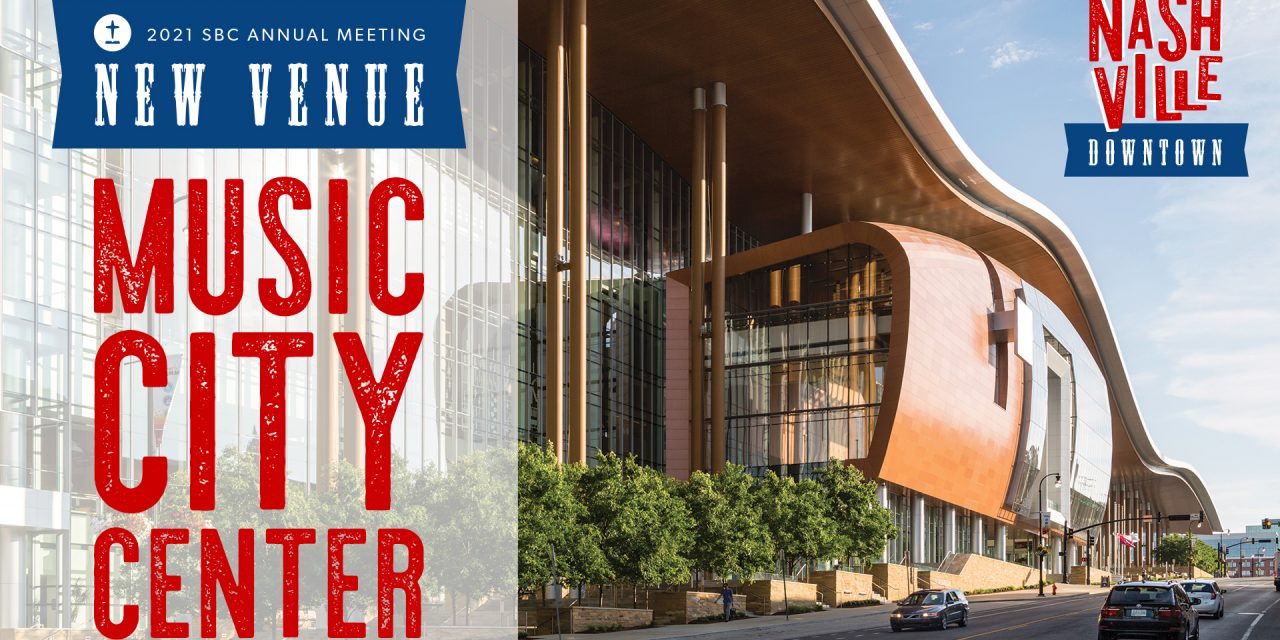 According to Ronnie Floyd, president and CEO of the SBC Executive Committee, the shift was made in order to allow adequate space to “provide abundant space conducive to holding a meeting that is efficient, effective and safe for every attendee” while adhering to local COVID-19 protocols. He said the decision was made in collaboration with the City of Nashville, the Gaylord Opryland Resort and Convention Center, the Nashville Convention and Visitors Corp. and the Music City Center, and thanked the organizations for what he described as “incredible efforts” during recent weeks.

The cancellation of the 2020 SBC Annual Meeting, originally scheduled for Orlando, “created significant, ongoing challenges,” according to Floyd, who added he and others were committed to holding the 2021 Annual Meeting “in accordance with SBC bylaws, in complete fulfillment of our order of business.”

While other options were explored, Floyd said the Executive Committee wanted to keep the annual meeting in Nashville for reasons including the protection of previously made travel plans by attendees. Nashville was selected as the site for the 2021 SBC Annual Meeting by messengers to the 2016 Annual Meeting.

The Music City Center, located in the heart of downtown Nashville, offers 1.2 million square feet of convention space, almost twice as much as the Gaylord Opryland Resort and Convention Center, a few miles northeast of downtown. The exhibit hall and childcare will also move to the Music City Center. Jeff Pearson, the SBC Executive Committee’s chief financial officer, said although lodging, transportation and other details have not been finalized, several blocks of hotel rooms have been secured near the Music City Center.

SBC President J.D. Greear, who chose the theme “We are Great Commission Baptists” for the 2021 SBC Annual Meeting, said the ability to meet was paramount.

“After the disappointment of last year’s cancellation, more than ever we see the importance of being together,” Greear said. “I am grateful for the hard work of the Executive Committee staff and the city of Nashville in helping us find a way to do so safely. I can’t wait to join brothers and sisters as we assemble to focus on the Great Commission and keep the Gospel above all.”

In recent months, Nashville has seen reduced rates of COVID-19 infections and hospitalizations. Citing vaccination rates that have climbed above 30 percent of the population, Nashville Mayor John Cooper announced Wednesday, April 14, he would loosen several restrictions as of Friday, April 16. Floyd said the “SBC is committed to complying” with COVID-19 guidelines of the city and the venue.

In an interview with Baptist Press, Music City Center CEO Charles Starks described a process in which public and private Nashville stakeholders came together with a common goal of helping to restart the economy. Nashville Convention and Visitors Corp. CEO Butch Spyridon told The Tennessean in a report Monday (April 12) the city’s tourism industry lost $4.5 billion expected revenue as a result of the pandemic.

“This has really been a collaborative effort between the Gaylord Opryland, the Metro (Nashville Public) Health Department, us and most importantly, you guys as Southern Baptists,” Starks told Baptist Press. “For y’all to have the confidence you have in us and keeping it in Nashville is a testament to the (SBC) but also to the city, to all the partners. We couldn’t be more excited to be hosting. We know how important this meeting is since you couldn’t meet last year. I think it’s going to be a great week. We’re just glad to play a small role in that.”

Pearson, whose duties include organization of the annual meeting, also expressed his gratitude to those who partnered to make the move possible, describing them as “amazingly civic-minded with a singular focus.”

“It was great to be a part as everyone came together, committed to reopening Nashville and welcoming the world back to our city,” Pearson said. “I’m grateful for the tremendous amount of hard work and cooperation that was necessary to bring us to this point.”

Hotel reservations booked through the Convention housing bureau remain in place, but can be modified through the housing website beginning April 26 at 8 a.m. Central.

“We’re working with partners to secure more lodging near the Music City Center, while we maintain the opportunity for guests to keep their current reservations and take advantage of the great opportunities afforded by the Gaylord,” Pearson said.

The 2021 Send Conference will also move to the Music City Center. Hosted jointly by the International Mission Board (IMB) and the North American Mission Board (NAMB), the event is scheduled to be held June 13-14. NAMB President Kevin Ezell said he “couldn’t be more thrilled” about the shift.

“This is a year we all need to be together, for a lot of reasons,” Ezell said. “This provides a great opportunity to do that. This venue will enable us to have a lot of creative options and provide the best experience for those who attend.”

The Send Conference’s theme is “Together on Mission.” Along with a primary message from nationally known Bible teacher, author and pastor Tony Evans, the event will include worship led by recording artist Michael W. Smith, a concert featuring Crowder, NAMB’s Send Luncheon and IMB’s Sending Celebration.

Referring specifically to the Send Conference, Ezell said he “would encourage every Southern Baptist to get (to Nashville) as early as they can and to absolutely be there Sunday night. I really think it’s going to be a real unifying time.”

IMB President Paul Chitwood thanked Floyd and the Executive Committee staff for their work to accomplish the move to the Music City Center.

“This new venue is a great alternative, even though we had originally planned to be at the fabulous Gaylord property,” Chitwood said. “We look forward to joining with NAMB to host the Send Conference and the Sending Celebration for approximately 60 new IMB missionaries. The IMB dinner will also be a great event at this new venue as we rejoice over the cooperative mission efforts of our Great Commission family.”

The Executive Committee is also working to relocate ancillary events scheduled June 13-16 to the Music City Center and nearby venues. Pearson said many other details, including shuttle services for those remaining at hotels near the Gaylord Opryland or the airport, will be announced in the coming days. He urged any with questions to visit sbcannualmeeting.net/faq, as well as the main site for the 2021 Annual Meeting; both will be updated as details are finalized.

“The real work begins now in putting together an annual meeting that will serve the messengers while bringing our Southern Baptist family back together,” Pearson said.