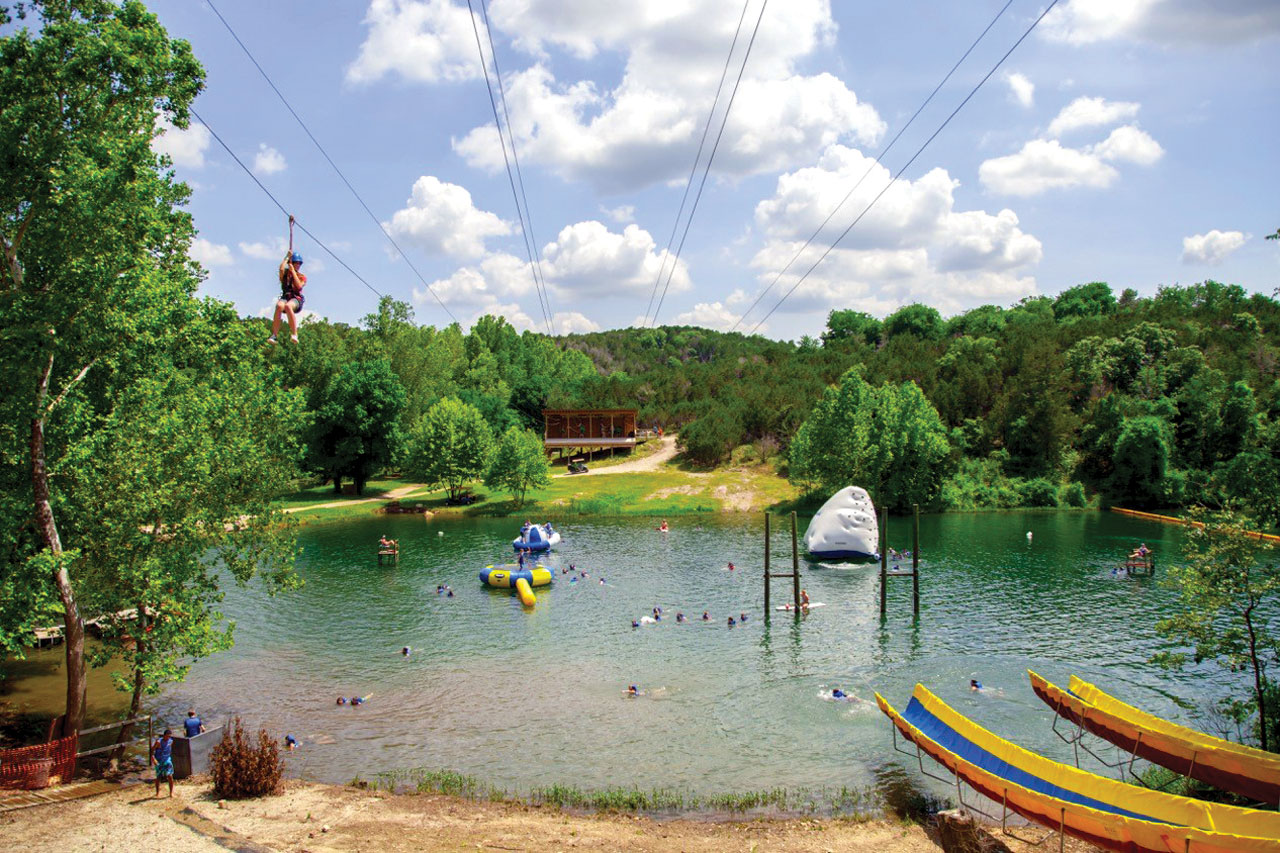 DAVIS—The beginning of June brought the opening of both CrossTimbers Children’s Mission Adventure Camp and the Falls Creek Conference Center youth summer weeks. After a month of rain and flood conditions, the two encampments operated by the Baptist General Convention of Oklahoma and located near Davis experienced sunny days and spiritual enrichment for campers of all ages. 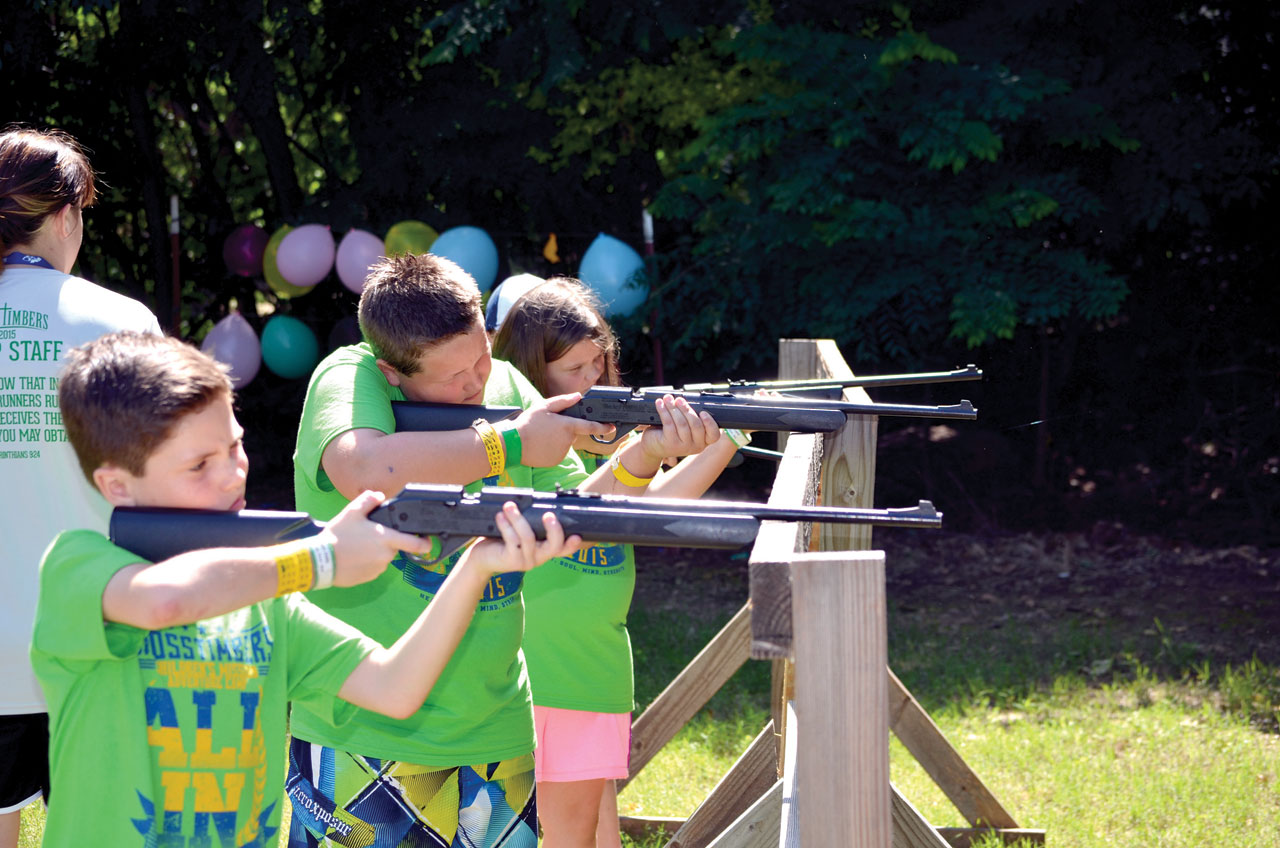 Now in its third year at its new location, CrossTimbers witnessed a record-high registration for its first session. With more than 420 campers who finished grades 3-6 attending, Session One was a unique start for CrossTimbers program director Glenn Barber.

“In previous years, Session One has been one of our smaller sessions,” said Barber who serves as the BGCO childhood ministries specialist. “This year, our Session One was almost sold out. Starting out with a full camp is different.”

CrossTimbers’ new location, which is in close proximity to the Falls Creek Conference Center, has the facility capacity to allow more campers to attend in the summer. An extra session has been added this year, increasing the total number to 11. 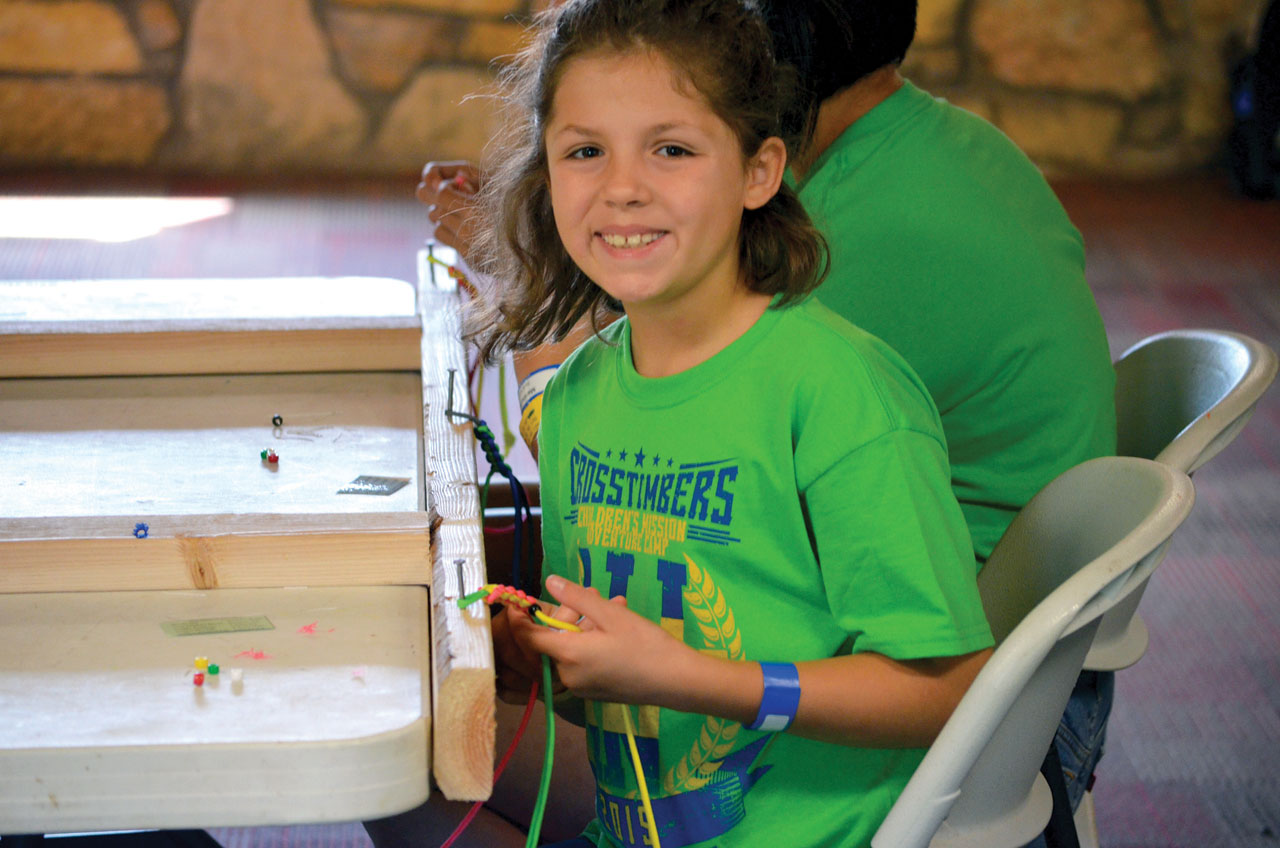 2) A camper works on a bracelet that can be used to share the Gospel (Photo: Chris Doyle)

“Our registration is about 700 more campers than last year,” said Barber. “We had more than 20 churches join this year. I always enjoy talking with the new church after the first few days to get their reactions. It’s always very positive. They seem blown away by our staff and their involvement and the way we schedule things.”

Will Wilson, Jr., pastor of Tecumseh, New Hope, experienced CrossTimbers for the first time this year with his children’s ministry. “It’s been an amazing experience. I love how the kids are engaged from the second they get off the bus. We love it,” said Wilson.

Barber said the theme for CrossTimbers this summer is “All In,” based on Mark 12:30. The camp also has 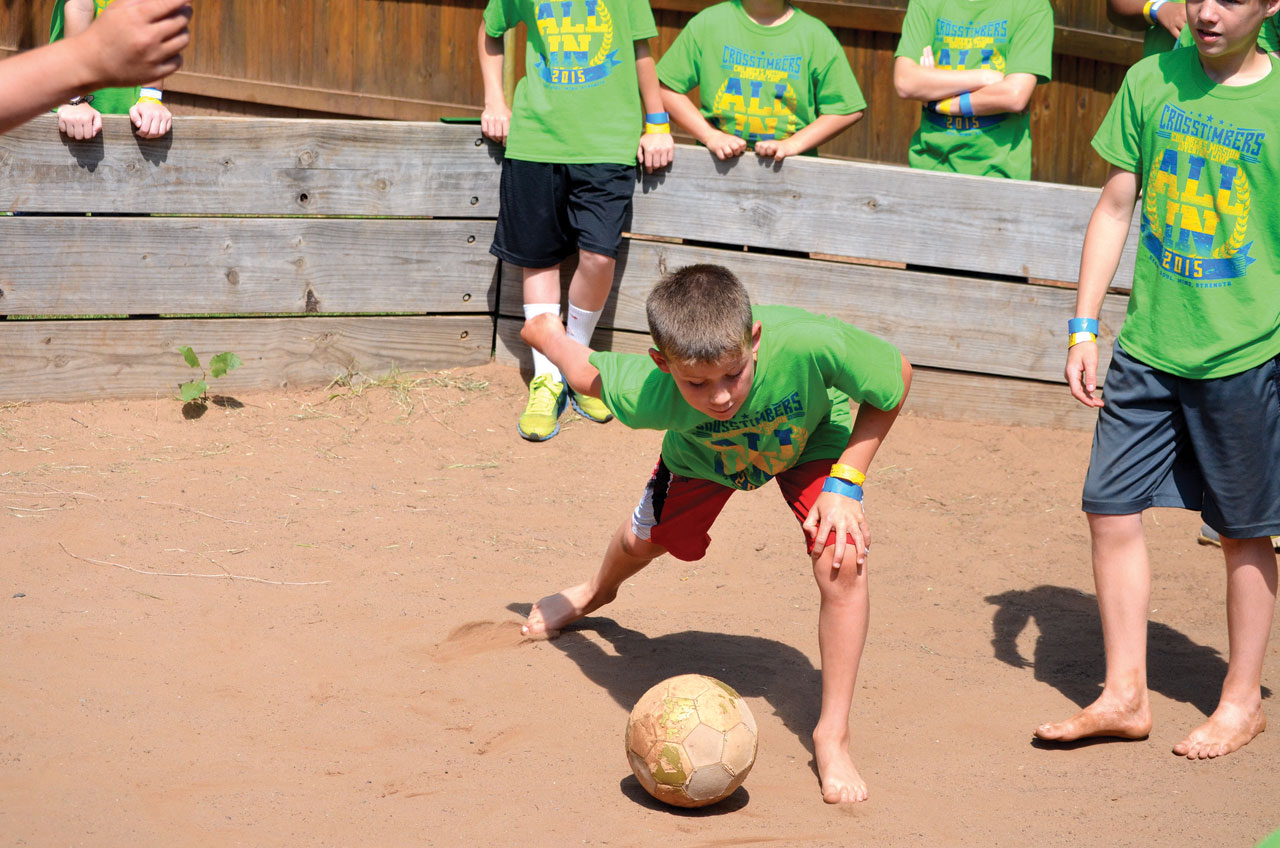 3) A camper winds up while participating in Gaga ball, a favorite game at CrossTimbers. (Photo: Chris Doyle)

dailythemes. Day One’s theme is “For All,” emphasizing that Christ died for all sins with a “strong evangelismpresentation.” Day Two’s theme is “All Out,” with an emphasis of dedication, “giving all they got in order to obtain the prize (Phil. 3:14).” Day Three’s theme is “Tell All,” sharing with campers the importance of sharing the Gospel through personal evangelism. Day Four wraps up the camp experience with the overall theme of “All In.”

Ryan Bauer, CrossTimbers camp manager, said the excessive rain that came in May did set camp operations back, limiting the time to set up activities. He said Session One campers were not able to experience the waterfront games and activities, but they should be in operation beginning Session Two, which started June 5, and for the rest of the sessions.

“We are thankful for the Lord providing a place for Oklahoma Baptists to bring their children to learn about missions and hear the Gospel being presented,” said Bauer.

The beginning of the Falls Creek youth weeks also was the beginning for Jason Langley, who started his position as director of conference centers on day one of the first camp session.

“It’s an incredible operation that takes place here with a lot of great people working together with the same purpose of seeing students get saved and grow in their faith,” said Langley.

“Christian fellowship is more than the camaraderie of friends; it is the coalition of saints, called to the highest purposes of God,” said Harrison. “Students will be challenged to view their relationships with one another through the lens of kinship, rather than friendship; only then will the church be healthy and on mission.”

The camp theme, Harrison said, will be emphasized each day through a film titled “Kindred” that presents a story about four students and a teacher who are pursuing the title for the 3A State Championship in Quiz Bowl. “Many of the principles they learn as they become a team will be things we need to apply to our lives together as believers,” said Harrison. 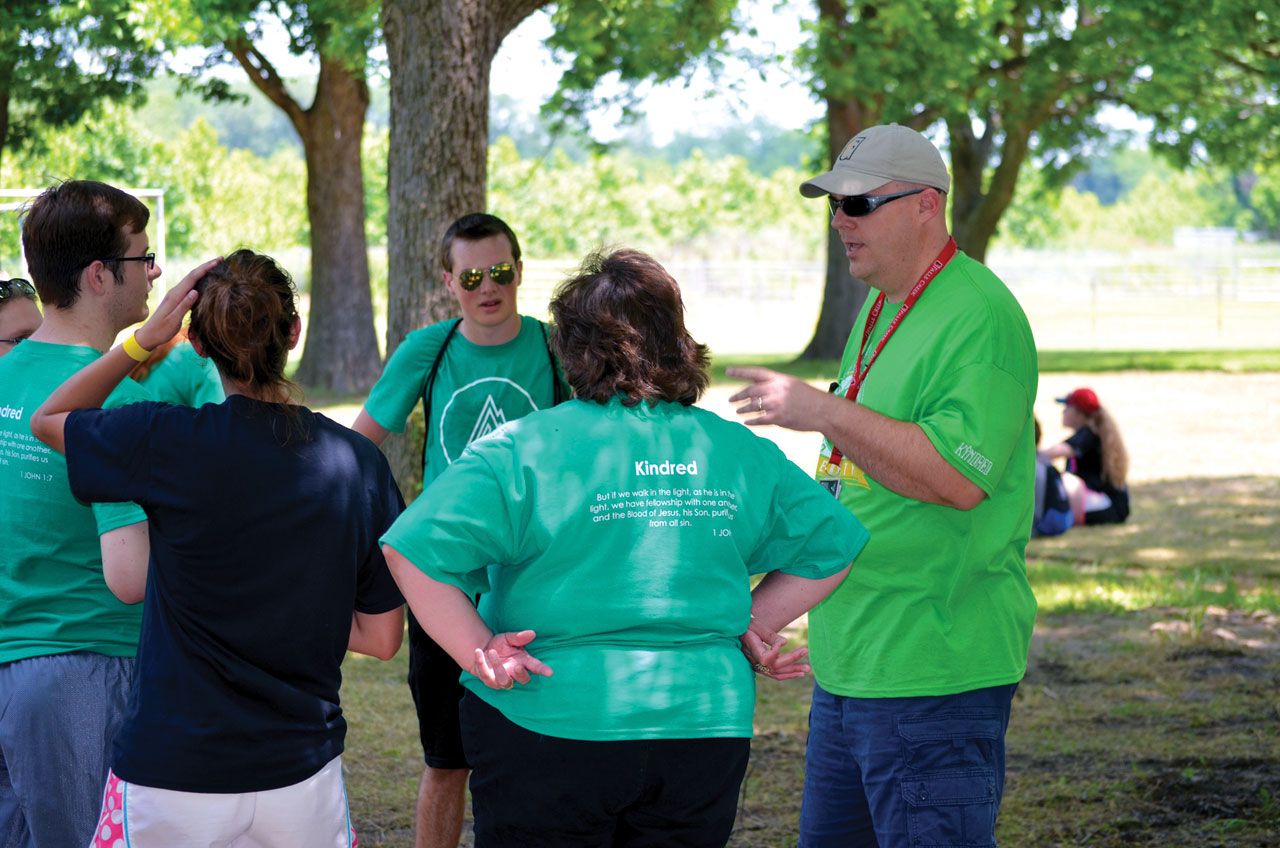 Weather did affect some of the conditions at Falls Creek, as the low road was not usable during the first week of camp, but all of the camp facilities, including the remodeled recreation fields, were in operation.

During the Tuesday evening service of the first week of camp, Dominguez spoke on Elijah facing the prophets of 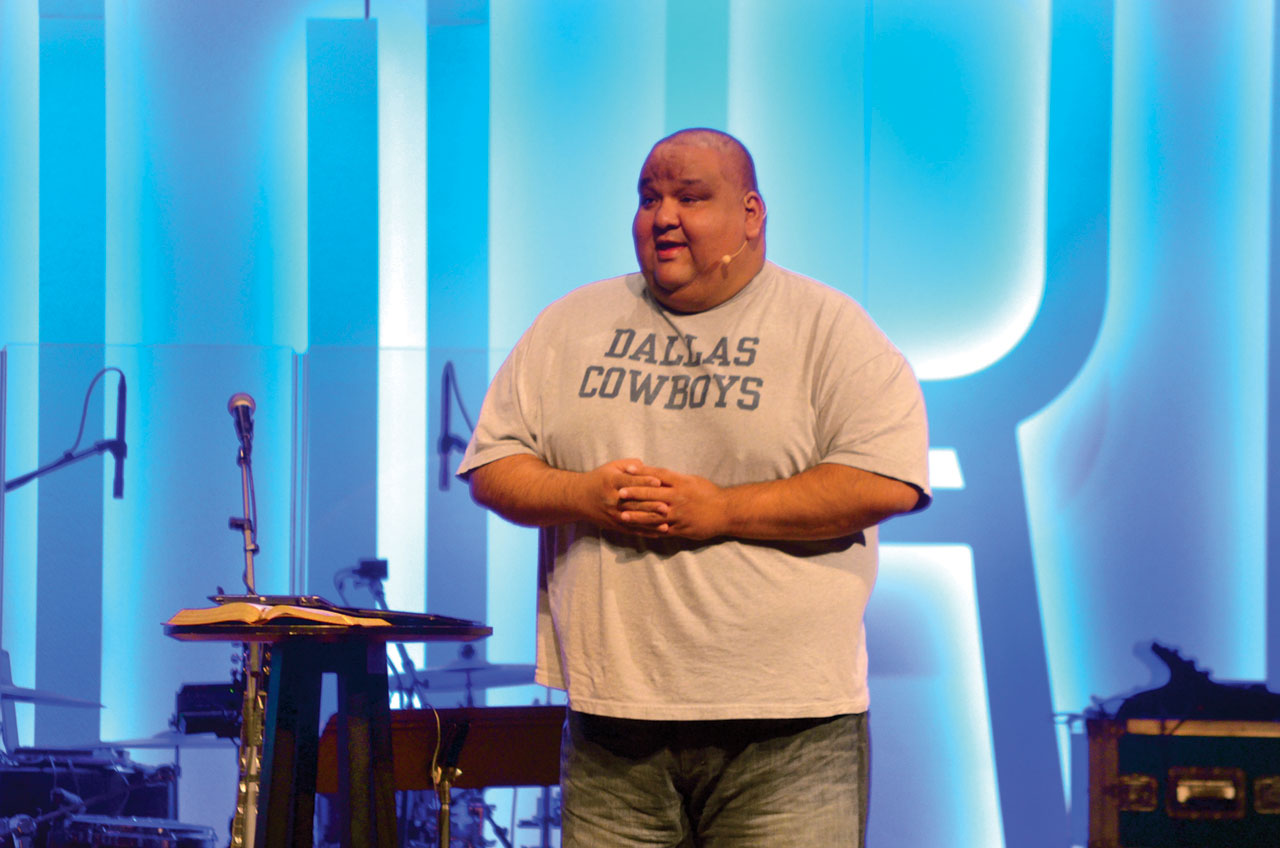 That evening service experienced 159 recorded decisions with 37 professions of faith and 76 recommitments. All evening services can be viewed online at www.skopos.org/livestream.