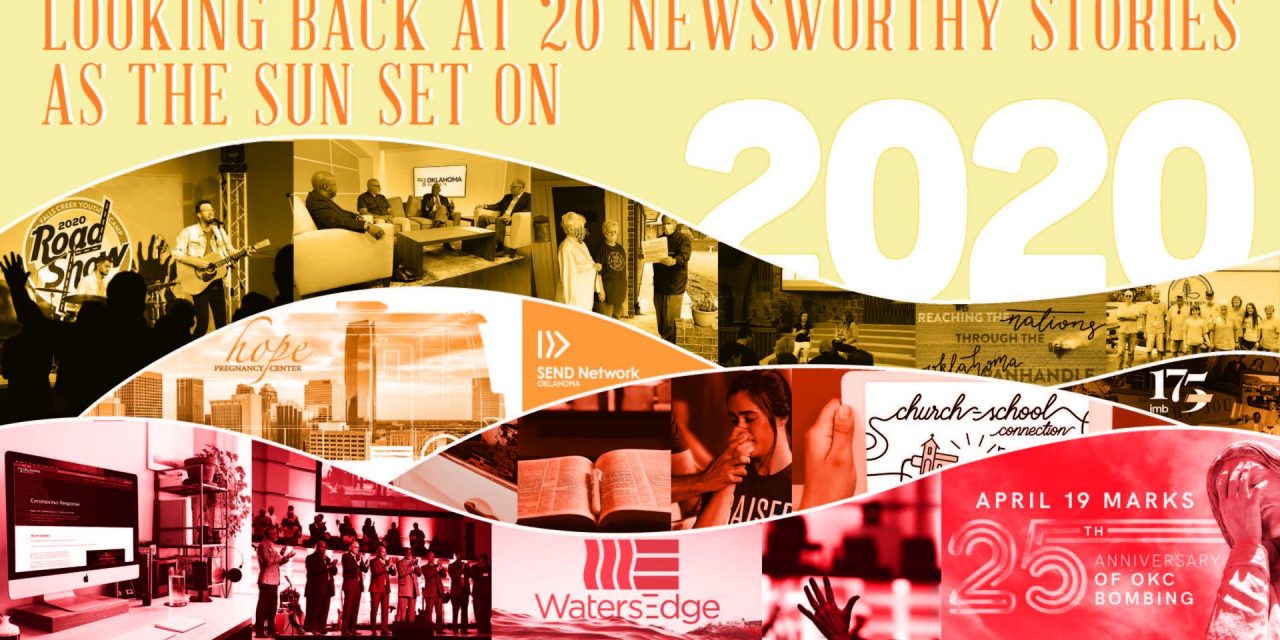 The year 2020 presented Oklahoma Baptists with unparalleled challenges but also Gospel opportunities. Here are the Baptist Messenger’s 20 newsworthy occurrences, in no order of priority, that reflect the many memorable moments of the year.

As churches were facing the struggles of how to gather for worship amidst the COVID-19 lockdown, the concept of having virtual services through Facebook Live and other streaming services became a popular option among churches across Oklahoma. Variations of drive-in services also occurred, allowing church members to remain in their cars and socially distance while worshipping in outdoor settings. These adaptations of worship were successful as some churches experienced newcomers attending, as well as unique observances of baptism that were done throughout a week while following social distancing standards.

In March, Oklahoma Baptists added a feature on oklahomabaptists.org that offers a wide array of resources that pastors and churches could use while experiencing the COVID-19 pandemic. The Coronavirus Response Resource provided practical tips and news updates that were useful for church ministry.

For the first time in 75 years, Falls Creek Youth Camps did not assemble for the summer in 2020. CrossTimbers Children’s Mission Adventure Camp also did not offer any sessions, as both camps were affected by factors related to the COVID-19 pandemic.

For 75 years, the Baptist Foundation of Oklahoma has been a reliable nonprofit Christian financial services organization. In 2020, the Foundation announced a name change while remaining committed to partnering with Oklahoma Baptists. In November, “WatersEdge Advisors and Ministry Services” was announced as the new official name, but Chief Executive Officer Robert Kellogg said, regardless of the name change, “Serving and strengthening Oklahoma Baptists will always be our primary purpose.”

Since 1845, the International Mission Board (IMB) has been committed to effectively sharing the Gospel around the world. In 2020, IMB set up a special 175-day prayer emphasis to celebrate its 175th anniversary. The Baptist Messenger commemorated the milestone by featuring some of the first Oklahoma Baptists to serve as IMB missionaries including J.V. Dawes, Grace Elliott, Edward Hansford Crouch, John and Della Richardson and Rosalee Mills Appleby. Appleby was the first to respond to a call to missions at Falls Creek.

On Sept. 15, Oklahoma Baptists board of directors met for a quarterly meeting. One of the most prominent business matters that resulted from the meeting was addressing 2020 finances of Oklahoma Baptists. Considering the major effects of a lockdown and business downfalls due the COVID-19 pandemic, board members successfully adapted the 2020 finances and also set the 2021 Cooperative Program allocation. “We were able to maintain financial stability in 2020. We streamlined our convention budget (for 2021),” said Hance Dilbeck, executive director-treasurer for Oklahoma Baptists.

Churches across Oklahoma were involved in serving through disruptions of everyday life, including helping children adapt to new school schedules involving both in-person and virtual meetings. Churches opened their buildings for those who needed access to internet, tutoring or homework space for unconventional and ever-changing schedules in 2020. Churches also were involved in food and dairy distribution and going into neighborhoods to let people know that Oklahoma Baptists care and are available to help them through the unprecedented times. Baptist Village Communities also found ways to adapt, including friends and loved ones having neighborhood parades and having residents participate in socially-distanced choir meetings. Baptist Collegiate Ministries provided meals and online Bible studies to college students who remained on campus.

In the July 23 Baptist Messenger, IMB writer William Haun shared how Guymon, First is making an impact on a large refugee community from North Africa. The story also reports on how Guymon, First also is connecting with members of a Southeast Asian people group.

Three events in Ardmore, Oklahoma City and Tulsa took place in late February with MinistrySafe founder Greg Love as a key speaker. The purpose of the conferences was to make churches better aware of risks and to help abate and eliminate sexual abuse.

In the April 9 edition of the Baptist Messenger, Bob Nigh, historical secretary of Oklahoma Baptist Historical Commission, recalled the moments of the great tragedy on April 19, 1995. Oklahoma City became a focal point across the world after the huge explosion at 9:02 a.m. that Wednesday. Nigh also reported how Oklahoma Baptists responded in a great time of need, leading to a service standard that reflects the many ministries of Oklahoma Baptists.

The Southern Baptist Convention (SBC) Annual Meeting was scheduled to meet in Orlando June 9-10, but SBC officers voted to cancel the event for the first time in 75 years. The 1945 Annual Meeting was cancelled during World War II when U.S. government banned meetings of groups larger than 50 people.

SBC leaders published a statement grieving the death of George Floyd on May 25, which sparked national outrage. The statement was co-authored by SBC President J.D. Greear and New Orleans Seminary President Jamie Dew and was unanimously signed by all SBC officers, entity heads and state convention executive directors including Hance Dilbeck.

A partnership was formed in August with the North American Mission Board and Oklahoma Baptists for a new church planting network. SEND Oklahoma Network approved two church plants in December with more church plants happening in early 2021.

Oklahoma Baptists hosted 34 International Mission Board missionaries and their children Aug. 12 for a luncheon, encouraging the stateside missionaries who were affected by international travel limitations caused by the pandemic. Missionaries said they were refreshed as a result of the meeting.

During the 2020 Annual Meeting, a segment of the program focused on remembering the 1921 Tulsa Race Massacre. A video was shown featuring Anthony Scott, pastor of the historic North Tulsa church, and Hance Dilbeck. The video dialogue recounted the tragic historic event on May 31, 1921, in which the entire Greenwood District of Tulsa and Black Wall Street were destroyed. Also, a new scholarship program called the 1921 Scholarship. Created in commemoration of the 100th anniversary of the Tulsa Race Massacre, the 1921 Scholarship will award two full scholarships to Black students at Oklahoma Baptist University. The scholarship will be funded in partnership by Oklahoma Baptists, and the Oklahoma Baptists African American Fellowship will help identify qualified young men and women for the scholarships.