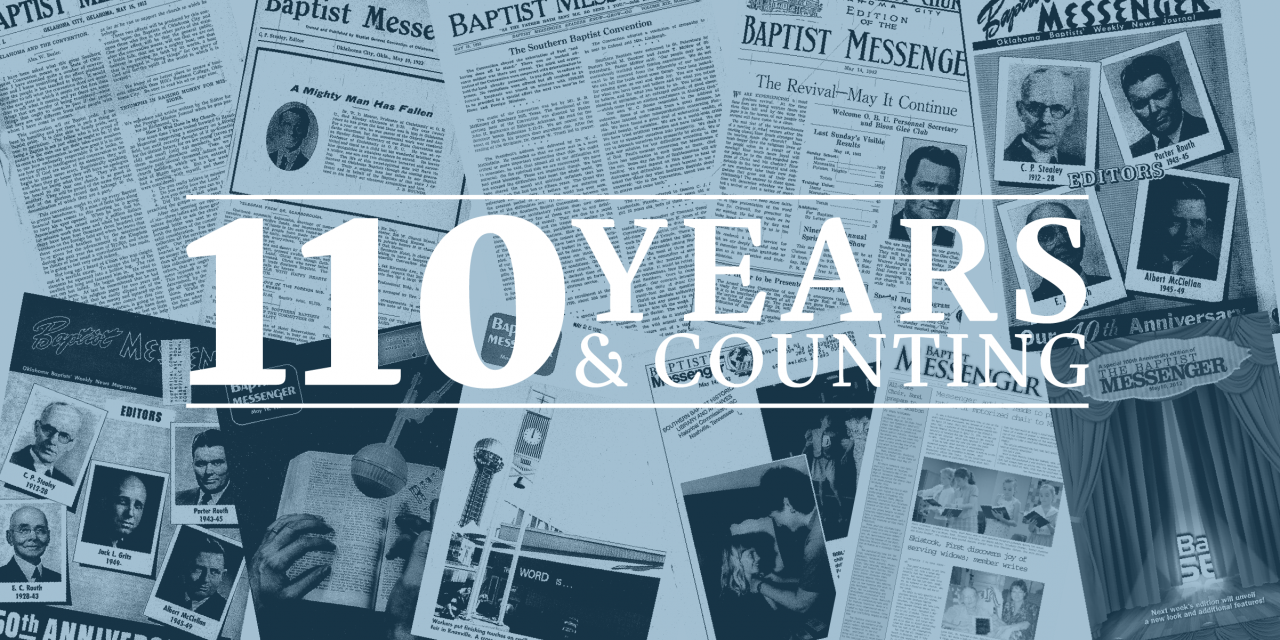 On May 15, 2022, the Baptist Messenger will celebrate its 110th anniversary. The flagship publication of Oklahoma Baptists now has been printed continually through these 11 decades, a time span which witnessed two World Wars, a Depression, the Cold War, the invention of the Internet and, most recently, a pandemic. 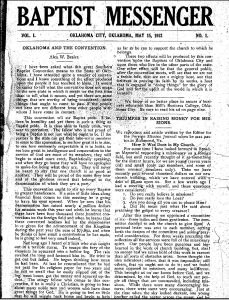 In 2012 leading up to its 100th anniversary, the Baptist Messenger published a 10-week series highlighting its history and years of ministry in articles authored by retired associate editor Dana Williamson. The articles, which can be viewed online, discussed the rapid development of the Messenger each decade.

“From its beginnings to today, the mission of the Baptist Messenger—to advance the Gospel and ‘to inform, inspire and connect Oklahoma Baptists’—has remained true,” said Brian Hobbs who has been the current editor of the Messenger for more than 10 years.

“We are grateful the Lord has provided through Oklahoma Baptists and that we can continue to publish good news about the Good News,” Hobbs added. “What once began as a print publication today includes our flagship print publication, our breaking news website, weekly podcast, social media channel and more. The tools of communication look different today, but the Gospel is the same, as is our charge to share the story of what God is doing through Oklahoma Baptists.”

Today, approximately 40,000 households are subscribed to the Baptist Messenger, making it one of the largest publications in the state. Every Oklahoma Baptist church receives a copy of the publication, and the Messenger is mailed to numerous countries and also is distributed to prisons in Oklahoma, as an outreach.

Oklahoma Baptist papers go back to 1844 when the first issue of the Cherokee Messenger rolled off the presses. That was the first paper printed in Indian Territory and the first Baptist paper of any kind in the territory.

Publication of the Cherokee Messenger was suspended in 1846, and revived in 1858, but did not survive long. Records show other Baptist papers emerged for a brief time. When C.P. Stealey, founder and first editor of the Baptist Messenger, started the publication in 1912, it was privately owned. It wasn’t until 1919 that the Baptist General Convention of Oklahoma purchased the paper for $5,000.

The first edition of the Messenger was timed to be distributed at the first Southern Baptist Convention annual meeting ever held in Oklahoma. The first issue contained articles about the work of the Foreign and Home Mission Boards, Christian education, the state Baptist Orphans Home and a statement about the benefit of the annual meeting of the Southern Baptist Convention to the five-year-old state.

In his first editorial, Stealey wrote: “This paper will earnestly support the organized work of the state and shall ever seek to be a helpful factor in solving the problems that are before us. We sincerely desire to be used for the glory of Christ and His cause in this state of abounding opportunity.”

Years later, in talking about the purpose of the Messenger in a 1945 editorial, Porter Routh said, “The Baptist Messenger uses different devices in fulfilling its task. (1) It carries pages each week devoted to many of the agencies, such as the WMU and the Brotherhood. (2) It focuses attention on worthwhile mission achievements through editorials, news articles and pictures. (3) It devotes special editions to various causes. (4) It tries to be optimistic in tone and cooperative in practice, supporting wholeheartedly the Unified Budget chosen by Oklahoma Baptists as the plan for execution of their mission program.”

By the grace of God, those visions and dreams continue to today and have even expanded. Throughout its 110 years, the Baptist Messenger has endeavored to inform, educate, encourage, challenge, uplift and inspire Oklahoma Baptists while communicating the Good News through its pages. About 100 million words published later, that is still the goal of your news journal: the Baptist Messenger.

1919—The Baptist General Convention of Oklahoma purchased the Baptist Messenger at a price of $5,000, making it the flagship publication of the state convention.

1920—The eight-year-old paper morphs into more of a denominational paper, focused on Baptist missions, church and religious news articles. 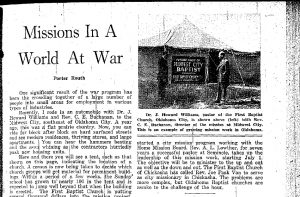 1943—With the economy booming because of America’s entry into World War II, subscriptions to the Baptist Messenger grow to 25,000. 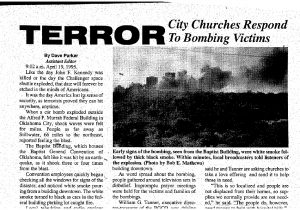 1995—The Baptist Messenger carried coverage and inspirational stories following the tragic events of the Murrah Building Bombing in Oklahoma City.

2002—The Messenger celebrated its 90th anniversary, became a four-color publication, outsourced printing for the first time and experienced format changes.

2010—The Baptist Messenger launches the “Insight Podcast” program which continues to present day. 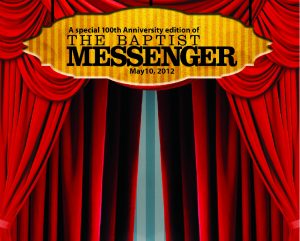 2012—The Baptist Messenger celebrated its 100th anniversary, holding events across Oklahoma that featured popular columnist Walker Moore and others.

2013—The Messenger introduces a Spanish-language edition called “El Mensajero Bautista” which is now published as a periodical insert.

2019—The Baptist Messenger makes the transition from a weekly print publication to twice per month, offering subscriptions at no out-of-pocket cost to Oklahoma Baptists.

Editors & staff
The following individuals have served as editors for the Baptist Messenger: 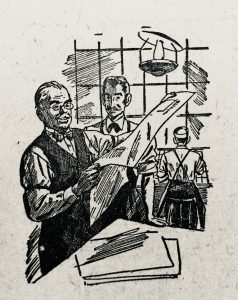 Other longtime Baptist Messenger staff included Dana Williamson, Fern Hurt, Bob Nigh, Bob Matthews and so many others. The Baptist Messenger has been supported by an excellent, godly and talented team of editors, writers, designers and support staff, as well as a capable pressmen, printing and mailing team members. Thank you to each and every one!