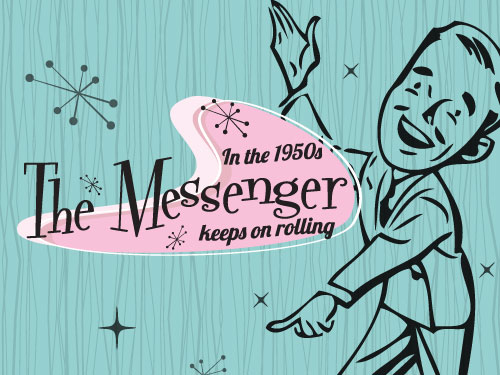 By 1950, Baptist Messenger subscriptions had passed the 50,000 mark, and a new, young editor, Jack Gritz, 32, was at the helm, and would begin three decades of service to Oklahoma Baptists’ news journal.

Gritz often joked that the Messenger was worth the 10 cents per issue subscription cost, but it was worth 25 cents for what was left out.

The “Every Baptist Family in Oklahoma Reading the Baptist Messenger Through the Church Budget Plan” campaign stated that the paper does not cost—it pays in the form of an informed, invigorated, world-visioned membership continuously reminded of their duty to the local church and all Kingdom causes.”

The entire printing process was still done in Shawnee at the OBU press, capable of producing 1,500 pages in an hour.

In 1950, the editorial offices were moved to a new $450,000, 30,000-square-foot, four-story, fireproof building at 1141 N. Robinson, which housed all offices of the Baptist General Convention of Oklahoma.

In his report to the state convention in 1955, Editor Gritz said the Messenger costs 10 cents.

In 1954, the Messenger moved its press operations from Shawnee to a vacant storeroom in the basement of the Baptist Building. The new machinery, including new Linotype, glider saw, miterer, proof press, stone handset type and casting box, was valued at $75,000. The Miller Major SY 41 printing press was capable of 4,250 impressions per hour.

The look of the Messenger remained much the same throughout the 1950s, with the front cover almost always a full-page photograph.

The attendance report continued to list the churches with the top numbers, with Tulsa, First leading the way almost every week. By 1956, churches reporting attendance were alphabetized.

The Messenger has always published 50 issues a year, with no editions one week in the summer and the last week in December. Beginning in 1955, during a week in August, the Messenger presented a special issue, usually on what Baptists believe.

Much of the space in 1959 was devoted to the issue of making the sale of liquor legal in Oklahoma. Out of the 50 issues that year, 38 contained a story or editorial on the subject.