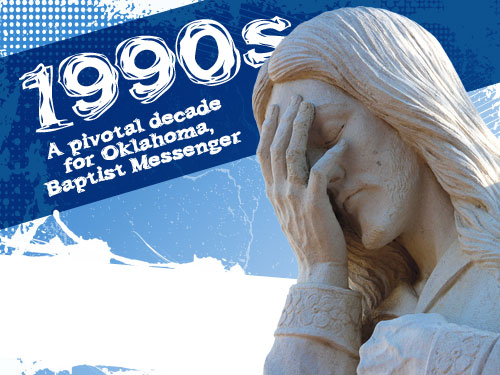 As traumatic events—the bombing of the Murrah Building in 1995 and the May 3, 1999 tornado—changed the face of Oklahoma in the 1990s, the Baptist Messenger, as well as the Southern Baptist Convention, also encountered challenges that altered their direction.

For years, the Baptist Messenger depended on Southern Baptists’ news service, Baptist Press (BP), for much of its national and international news. But the integrity of Baptist Press came under fire in 1990 when BP director Al Shakelford and news director Dan Martin were fired, accused of unbalanced reporting on the SBC conservative resurgence. The dismissed editors, in turn, charged the SBC Executive Committee of limiting the free flow of information.

In light of this, state Baptist paper editors met in Dallas to discuss the possibility of an alternate news service in case BP was closed down or relegated to taking only one side of a story. The editors insisted they had to be concerned about the credibility of the news they received because it had an impact on their own credibility.

Later that year, Associated Baptist Press (ABP) was chartered “to provide a professional news service designed to tell Baptists and others the facts about events of interest to Baptists in an accurate and fair manner without bias or political agenda.”

Because the new news service was associated with the newly formed moderate group of Baptists—Cooperative Baptist Fellowship (CBF)—the Baptist Messenger, was instructed not to use stories generated by the moderate-oriented APB, nor to accept advertising from CBF.

Of the ouster of the BP editors, Messenger Editor Glenn Brown said, “It is altogether possible that the Baptist Press’ conservative leadership will hire capable editors who can report the news fairly and accurately, but they will have to earn their credibility with state paper editors who fear freedom of the press is being lost.”

Brown was editor when the Messenger’s offices were moved from 1141 N. Robinson to 3800 N. May Ave. At the time, there was no room for the press equipment, so it remained in the basement of the old building, and a courier was hired to transport the finished Messenger pages to the printing presses each week.

In April 1995, Brown announced Messenger subscriptions would increase two cents a week for church subscriptions and four cents a week for individual subscriptions, because of a 28 percent postal increase and a rise in the cost of paper. Brown said in 1994, a truckload of paper cost $12,900, but the last truck load cost more than $17,000, and the next would cost close to $20,000. Messenger circulation was just over 100,000, and 1,180 churches included the Messenger in their budgets.

Baptist chaplains and disaster relief workers, as well as Messenger reporters Bob Mathews and Dana Williamson, were some of the first to respond to the bombing of the Murrah Building in downtown Oklahoma City on April 19, 1995. Messenger employees heard and felt the explosion and could see the smoke rising from the building from their office windows some 30 blocks away.

A random survey of Messenger subscribers in the early 1990s revealed that the average reader was a 60-year-old female. Realizing a need to reach younger readers, and also to meet postal regulations for lowest cost automated mail, the Messenger made its first size change in 84 years debuting a tabloid-size paper on Jan. 2, 1997.

“While retaining features Baptists have come to depend upon through the years, the new Baptist Messenger will add new features and content to appeal to younger readers, such as issues and advice topics on children, teens, singleness, marriage and parenting,” said Brown. “As the primary communication channel between the state convention and the churches, the updated and enlarged Baptist Messenger will be an invaluable aid as we move together into a new millennium.”

While the addition of up to 50 percent more space allowed for a broader range of topics and the inclusion of more writers, the subscription price increased only one cent per issue per week, or 50 cents per year for those receiving it on the Every Family Church Budget Plan.

The first issue of 1997 featured a 12-page tabloid format with splashes of blue in what was, since its inception, a black and white publication.

Of course, not all readers were happy with the new format. Most who expressed criticism didn’t like “wrestling” with the larger paper. One even said it got wet while reading it in the bathtub.

During the late 1990s, Alan Day, then pastor of Edmond, First, began writing a weekly series on Baptist doctrine, and Walker Moore began his series, then called “Parenting teens,” in March 1998.

Brown retired as editor Sept. 30, 1997 after serving 10 years. In his last editorial, Brown wrote, “Serving as editor of the Messenger is a sacred trust, one I have not taken lightly. The paper does not exist to serve the selfish desires of any individual, but rather to serve the Lord, the churches and the ministries God has called us to undertake cooperatively.” Brown’s last issue as editor saw a circulation of 94,109.

John L. Yeats, 47, editor of the Indiana Baptist newspaper, was elected editor in September, and assumed duties Nov. 1, 1997. Yeats said he compared a Christian publication to a baseball diamond. “Generally you have content, distribution and advertising as the three bases. I would add home base as advancing the Kingdom of God.” He added we need to stand as people of light in a very dark place. “The paper should stand as a beacon of light giving knowledge. That’s going to be done, not just in copy, but behind the scenes on our knees.” When Yeats came, circulation was 93,904.

Bob Mathews, the dean of staff members of state Baptist newsjournals, retired July 31, 1998, after 34 years as associate editor. Mathews’ reputation was well-known throughout the SBC. He was involved with 1,713 issues. In a July 23 editorial, Yeats said, “Bob’s professional shoes are humongous. The work he’s done these past 34 years and his knowledge of Oklahoma Baptist church history is indispensable, irreplaceable and invaluable. I will miss his wise counsel and quick wit. When you have someone retire who is so intricately intertwined into the fabric of your ministry, it is impossible to fill the position.”

Other staff changes during the decade saw Assistant Editor Sarah Zimmerman move to the Home Mission Board as director of news and information, and Dave Parker, who worked for a Yukon newspaper, replaced her.

In 1993, Dana Williamson became a part of the Messenger staff as an assistant editor in addition to her duties in the convention’s public relations area.

Jerry Pierce, a graduate of the University of Central Oklahoma, who owned his own Christian newspaper, became the publication’s first advertising director in August 1998, and Bob Nigh, managing editor of Friday newspaper in Oklahoma City, was named assistant editor in October 1998.