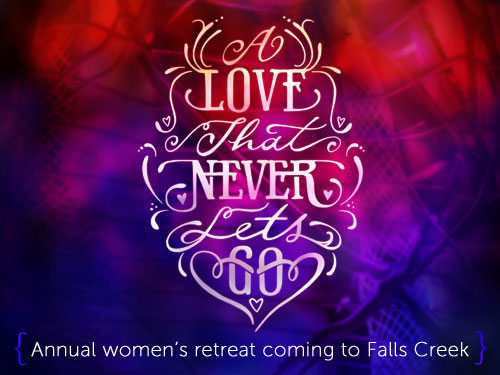 Women from across the region are planning to gather at Falls Creek, April 19-20, for the annual Baptist General Convention of Oklahoma (BGCO) Women’s Retreat.

“Each year, we plan the retreat with a mixture of what we know women want, but also trying new things to keep it fresh,” said Kelly King, BGCO women’s ministry specialist.

“This year is no different. We’ll have great worship sessions in the tabernacle, breakout sessions from some of the best Bible teachers in Oklahoma, and women will get the overall experience of being at Falls Creek,” said King.

Harper is a storyteller and scholar who has appeared numerous times on the platform of Women of Faith conferences. Her Bible study on Malachi was the inspiration for the retreat theme.

“Her Bible study focuses on God’s love to broken people,” said King. “We have weaved that thought into several things that will be done throughout the weekend.”

“I’m really excited for women to hear from Smith,” said King. “They may be familiar with her husband, Todd, who is the lead singer for the Christian recording group Selah, but they may not know Angie.”

“Her books, including I Will Carry You, What Women Fear and Mended, all point to God’s redeeming love and His pursuit for all of us to come into a relationship with Him,” said King.

The Johnsons are not strangers to the Falls Creek stage. Jeff’s band has led worship during summer weeks of camp.

Together, the Johnsons lead worship in a variety of venues, from camps, retreats, festivals and collegiate ministries.

“What’s interesting about Jeff that a lot of people may not know is that he auditioned for American Idol in 2005,” said King. “He made it to Hollywood, but was cut before the final contestants were chosen, which included an Oklahoman named Carrie Underwood who ended up winning that year!

“Because of the exposure on American Idol and his public stand for Christ, his ministry took off in unexpected ways. I love that he stills displays a humble heart, and now that he is married to Jourdan, they’ve become a great musical team.”

Recreation is offered on Friday afternoon and Saturday morning. Women will have the opportunity to try their hand at target sports or ascending the climbing tower at the ropes course by Prices Falls.

Friday evening’s general session will be followed by a showing of the movie, October Baby. King explained, “We realized that many women throughout our state did not have the opportunity to watch the powerful story when it was in theaters last spring. Because of the theme and the power of God’s love and forgiveness, we wanted to provide a late-night option for women who have not seen the movie.”

A special track of sessions will be offered to ministry wives on Friday afternoon, with a reception for all ministry wives on Saturday morning. Julie Woodruff, Women’s Minister at Hendersonville, Tenn., Longhollow will be the featured speaker.

For details about the retreat or to register online, visit the website at bgco.org/ladiesretreat.