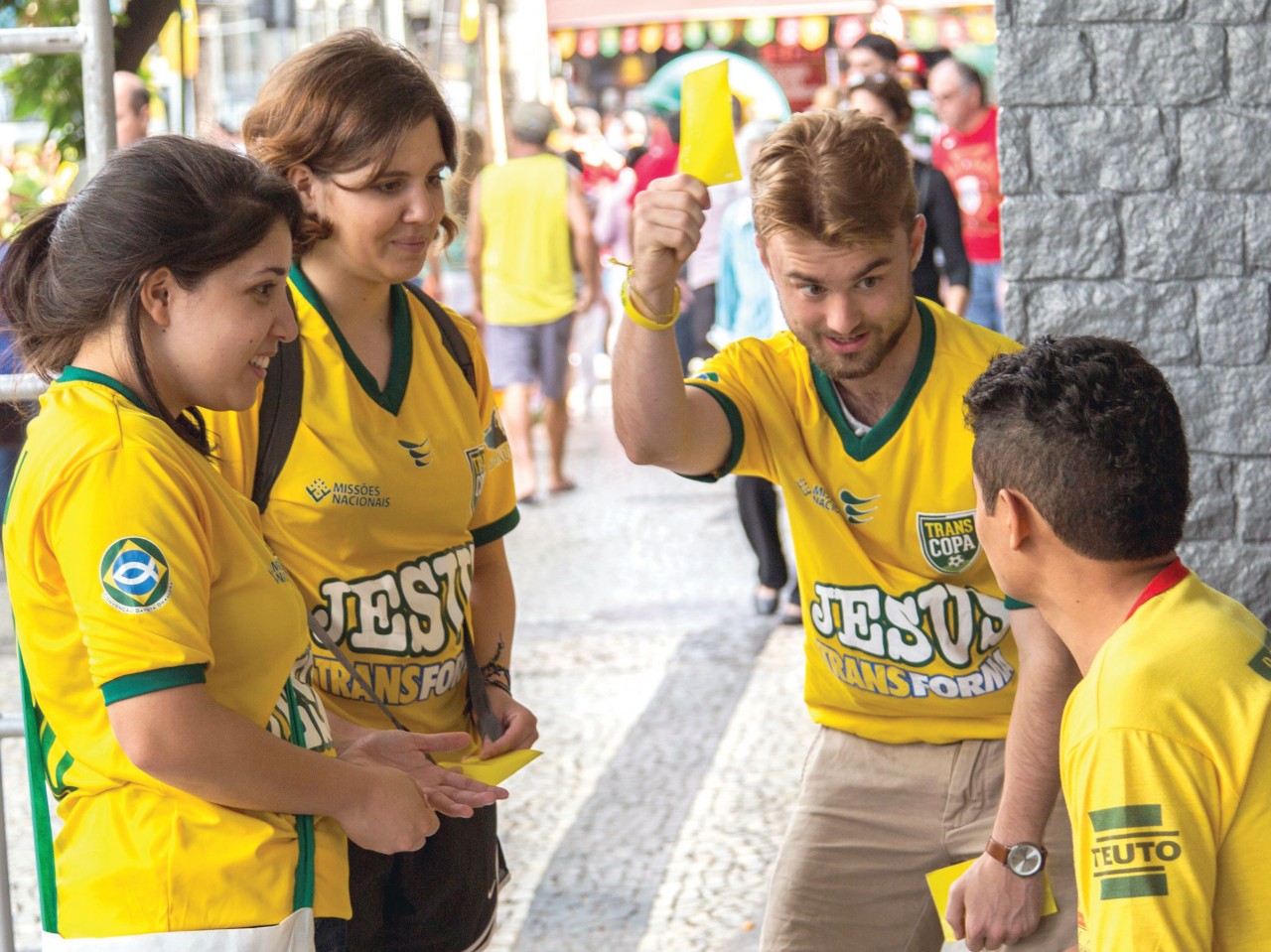 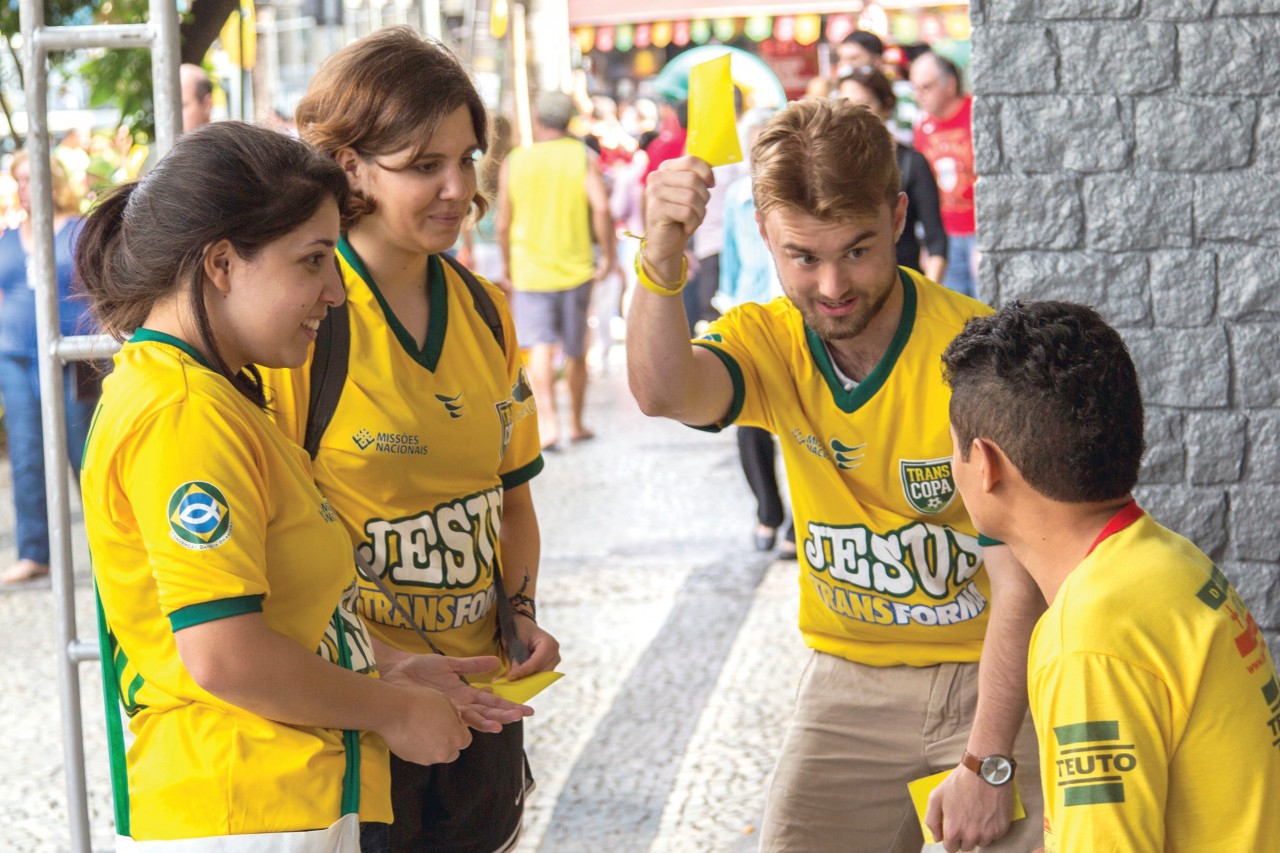 photo: Wilson Hunter
Student volunteer Grant Gilliam raises a yellow card—resembling what a referee uses to call a rule violation in a soccer match—to get the attention of a soccer fan near Rio de Janeiro’s Maracana Stadium. Gilliam and his teammates, from left, Bianca Brandao and Stephanie Silva, a student at Oklahoma Baptist University, shared the Gospel before a World Cup match.

RIO DE JANEIRO (BP)—With 64 soccer matches contested by 736 players on 32 teams in 12 cities, the month-long 2014 FIFA World Cup in Brazil is the most watched sporting event in the world.

In addition to the 1 billion people tuning in around the globe, an estimated 600,000 visitors converged on Rio de Janeiro and the 11 other host cities in Brazil to watch and cheer for their country’s team. Other visitors to Rio, however, had another goal in mind—sharing the message of Jesus Christ with those who have never heard the Gospel.

A team of 11 Southern Baptist college students and two student ministry leaders traveled to Rio de Janeiro for the World Cup as part of the International Mission Board’s (IMB) student mobilization efforts to partner with Brazilian Baptists in outreach during the world-famous soccer tournament. The students, their Brazilian co-workers and some IMB missionaries spent two weeks witnessing in communities around Rio and evangelizing near the city’s Maracanã stadium, where tens of thousands of fans attended World Cup matches twice a week during the June 12-July 13 competition.

After arriving in Rio, the student volunteers spent time learning about a specialized witnessing technique developed by the Brazilian Baptist Home Mission Board. Diogo da Cunha Carvalho, coordinator of evangelistic strategies for Brazilian Baptists’ domestic missions efforts, helped to develop the “Yellow Card Strategy” for Brazilian churches to use at a regional soccer competition in 2013.

In soccer, Carvalho explained, a yellow card is displayed by a referee as a warning or caution to a player regarding conduct that could lead to expulsion from the match (signified by a red card).

“It’s a sign to the player that he is getting very close to severe consequence for his actions,” Carvalho said. “This visual understanding is the perfect direct approach for witnessing against the backdrop of a soccer match.”

Carvalho demonstrated the witnessing technique, which begins by approaching someone and raising a yellow card while blowing a whistle—just like a soccer referee. This warning, though, is a message from God, the Baptist volunteer tells the person.

“In Brazil, probably 90 percent of the people said ‘yes’ when asked if they wanted to hear the Gospel,” Carvalho said. “With such an interest in the Word, we took a direct approach like this yellow card.”

After receiving permission to explain the message, the approach led to a “goodness” test, Carvalho explained. Here, the presenter showed, through a series of questions, how all people are sinners according to the Bible and fall short of being “a good person.” Then, the believer shared the reality of the Good News.

“We talked about the Law to emphasize the seriousness of sin, but introduced the Good News through the act of love that God did for us,” Carvalho said.

In a country such as Brazil with a history of religiousness, “at this point, some may have connected the phrase ‘Jesus died for our sins,’ but there’s a disconnect between that phrase, their actual sinfulness and the ‘I’m a good person’ mentality,” Carvalho told the Southern Baptist students. “They don’t connect the giant statue of Jesus that stands over Rio with what Jesus did for them on the cross—that He came to die and He rose again to defeat death for their freedom.”

On game days in Rio, the collegiate team divided into groups of two or three, along with a translator. The teams then fanned out around the outside of Brazil’s national stadium, which was thick with celebrating fans even hours before the stadium opened.

Lee Dymond, campus minister at Auburn University at Montgomery, Ala., and leader of the collegiate group, said the students “who were here on our team have a heart for evangelism and a heart for the Gospel. There  very few times in history where so many people from so many different places come together. We got an opportunity to be right here with them and we got an opportunity to share the Gospel with as many as we could.”

Bekah Gordon, co-leader of the collegiate trip, said the atmosphere was exactly what she had hoped.

“It’s the World Cup!” said Gordon, who had served with Dymond at Auburn-Montgomery as a semester missionary through the North American Mission Board. “I grew up playing soccer, and I’m now a soccer coach in Montgomery. To be able to combine two of my greatest loves—the Gospel and soccer—was awesome.”

According to Gordon, evangelizing with the yellow card approach “was really unique because you’ve got a lot of soccer fans who know exactly what it means.”

At the stadium one day, Gordon and her partner approached a young man sitting alone.

“Ricardo was sitting by himself. I  walked over to him and threw up the yellow card and blew the whistle,” Gordon said. “He immediately threw up his hands and said ‘What did I do? What did I do?’

“That was the perfect reaction because we wanted him to have the idea that something was wrong,” she said. “We told him it’s not just what he has done, it’s what all of us has done.”

At first Ricardo said he was a good person, but recognized after the examples Gordon gave that he was indeed guilty and deserving of penalty and hell. He admitted he had a faith background as a child, but discarded it to enjoy his own lifestyle of fun and partying.

“This concerns me very much,” Ricardo said through the translator.

Gordon and her evangelism partner Jordan O’Donnell, a student at Virginia Tech University in Blacksburg, explained to Ricardo “that giving our lives to God is not like going to prison; it’s not bondage, but freedom,” Gordon recounted. “We shared that we are not bound to sin anymore and life with God is better than the world.

“We continued to share but our translator interrupted us and said, ‘He’s ready to accept Christ!’” Gordon said. “We prayed with him and he said ‘I feel free now.’ The cool thing about this whole exchange is that Ricardo is from Lima, Peru. God blessed our  interpreter with enough Spanish to communicate the Gospel clearly.”

James Dubuisson, a student at the University of North Alabama in Florence and youth minister at Lawrenceburg, Tenn., First, admitted he had some apprehension to the direct approach of witnessing.

“I was skeptical of the methods we’re using here because I’m more comfortable building a relationship with someone and then sharing the Gospel,” he said. “But coming up to someone on the street and saying, ‘You need to know about Jesus’ is new to me. God has been challenging me a lot.”

Dubuisson said it was a great feeling to approach the first person and find him receptive to the Gospel. “When we were leaving, they said it was the best thing that ever had happened to them,” he said.

For the ones who did not accept Christ following their conversation, Dubuisson said, “I pray that God continues to work through the seeds we’ve planted here.”