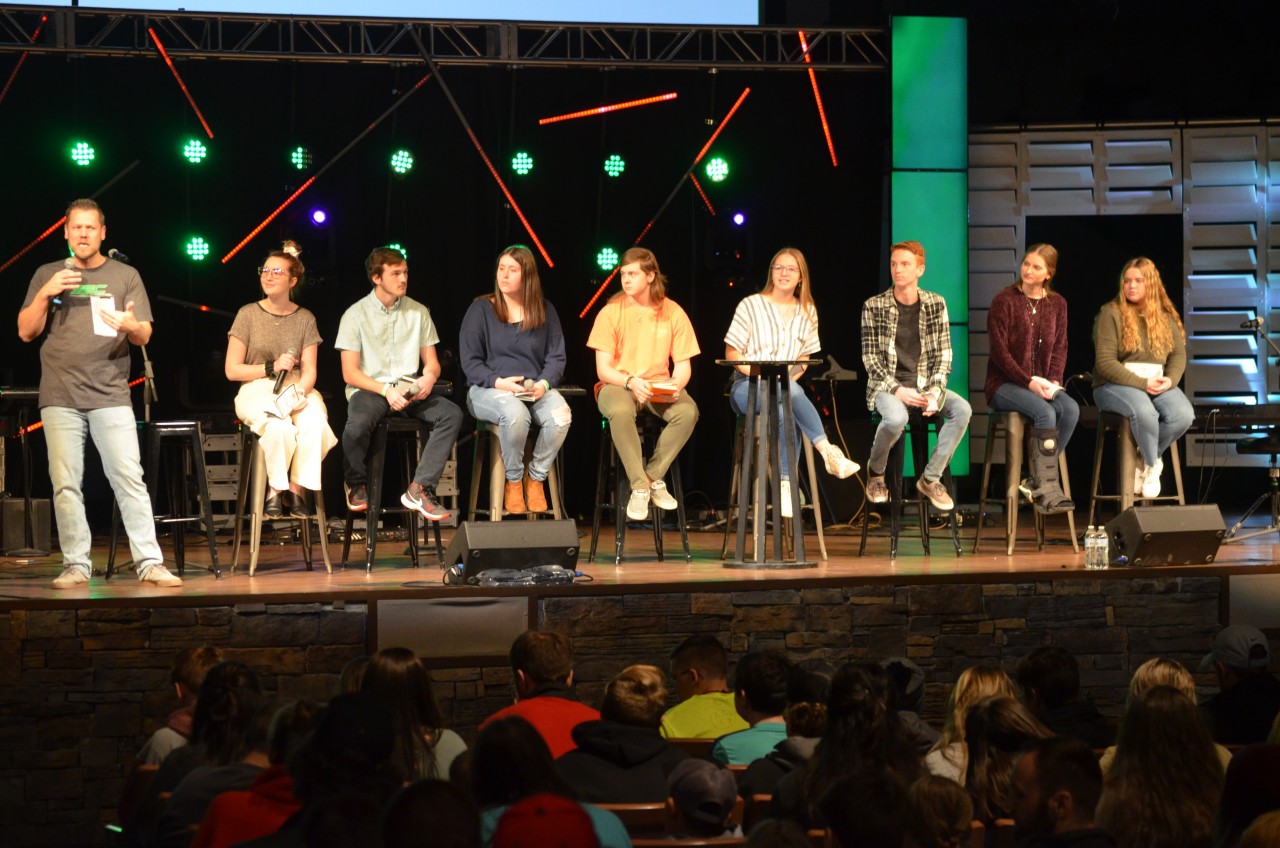 DAVIS—The Youth Evangelism Conference (YEC) drew more than 3,000 people from 160 churches this year, as students across Oklahoma met at Falls Creek Baptist Conference Center Jan. 19-20 to be taught how to share the Gospel in their communities.

“Kids were excited and engaged,” said Brian Baldwin, student evangelism and missions ministry partner for Oklahoma Baptists. “You could tell they wanted to learn more about sharing the Good News with their friends and classmates at school.”

YEC’s 3,000 attendance mark exceeded last year’s attendance of 2,350 people from 115 churches. This was the fifth year YEC met at Falls Creek, and YEC has seen attendance more than double Falls Creek’s first year to host in 2016.

Baldwin said the focus of evangelism is applied four ways at YEC—urgency, fluency, strategy and mobility—with each application being a focal point in a main session.

D.A. Horton, a pastor in California, opened YEC addressing the urgency of sharing the Gospel.

“He’s a top speaker right now, not just with young people but with adults as well,” Baldwin said about Horton. “He was deep but able to communicate with students in a way they understood. He gave a powerful Gospel presentation and encouraged students to go talk with their youth leaders during an invitation time. For an evangelism training event, we are so thankful that the Gospel was proclaimed and that people responded.”

Though official numbers were not reported, Baldwin said between 25 and 30 young people made spiritual decisions at the end of YEC’s opening session.

“It was a great morning session,” Baldwin said, emphasizing how the Skit Guys’ humor and story-telling resonated with students. “They started out with what not to do when sharing the Gospel. They also were able to share their story. Tommy was responsible in helping Eddie come to know the Lord. They also did a skit called ‘Eye-Glass Department,’ which connected well to (YEC’s) theme of ‘Clarity,’ which is based on Isaiah 42:7, ‘You open the eyes of the blind and set the captives free.’”

Emphasizing how evangelism is relational, the Skit Guys told YEC attendees, “When you do the possible, God does the impossible,” encouraging students to invite friends to church events and make Gospel opportunities a regular encounter. This allows God to do a supernatural work in their friends’ lives.

In YEC’s second Monday session, a panel of eight students discussed developing a strategy of sharing the Gospel. Baldwin moderated the panel, as the students shared the “Good News” conversation strategy.

Each student shared a step of the strategy that helps people learn how to make the Gospel a part of regular conversations.

“They were so pumped,” Baldwin said about the students making the presentation. “They were able to share their own testimony (of Gospel sharing) and communicated so well. It was awesome.”

The final session of YEC focused on mobility—or being active in evangelism—and was led by Baldwin who featured videos that can be used as conversation starters. Students have access to the videos through social media and can share with their friends.

“It is said that you can lead a horse to water, but you can’t make him drink,” he explained, “but you can salt his oats and make him want to drink. That’s what these video are for. They help somebody to want to have a Gospel conversation with you.”

“Strategic action planning time is always an impact,” Baldwin said. “It sends churches home with a game plan that is accustomed to them, their students and ‘their turf’—where they have influence at schools, sports teams and other groups.”

Church groups that attended YEC last year were provided a copy of the group’s previous plan. Baldwin said each group used last year’s plan to measure what worked and where they can improve in sharing the Gospel.

YEC featured 21 breakout sessions that met throughout Falls Creek’s campus. All of the breakouts were listed in four categories relating to Gospel-sharing strategies. The categories included creative, direct, logical and relational.

“The ‘bread and butter’ of YEC are the breakouts,” Baldwin said, “because the settings allow for more interaction and feedback. All of the breakouts are recorded because we know everybody is not able to attend all of them, and we are making them available online to church groups.”

YEC has made major changes over the years. Now that it has found a stable home at Falls Creek, YEC is expected to be a training event for Oklahoma Baptist students.

The following are comments from youth leaders who attended YEC this year:

“This YEC was probably the best I have ever been to” – Lance McAfee, McAlester, First

“Thanks for letting me a part of YEC. It’s one of my favorite times of year. Our students loved it and grew a lot this weekend” – Nathan Brumley, Eufaula, First

“I thought the conference was excellent. D.A. Horton did a great job. He addressed our sin problem, talked about repentance, and tied it in with evangelism. The Skit Guys are great communicators. They held the student’s attention. Having students share their thoughts on GOODNEWS was great. I think it’s important for our kids to see other kids taking leadership roles. Those short videos are a great tool to use. The breakout sessions were good too. Good information, tools and techniques to help our students and leaders. All in all, I thought it was a win!” – Jimmy Harwood, Duncan, Immanuel

“We had a great time at YEC, and this was my students’ (and my) first time ever attending YEC. They all came back with a renewed commitment to Christ and sharing the Gospel with their peers. During group time on Monday, one of my students said, ‘This has really opened my eyes to see the things that I haven’t been doing and has encouraged me to do the possible and allow God to do the impossible.’” – Stoney Jackson, Newalla, New Life

“YEC was awesome! Our kids are excited. They came up with great goals to advance the Gospel in our community. On the way back, we stopped at McDonalds to eat dinner. We had a girl share the Gospel with some people. She was nervous and scared but stepped out of her comfort zone to do that. We didn’t have any decisions made, but she did share the Gospel! I also had the opportunity to share the Gospel with a guy on Tuesday morning. He didn’t make a decision, but I got to pray for him, and I prayed the Gospel over him” – Koby Franz, Broken Bow, First