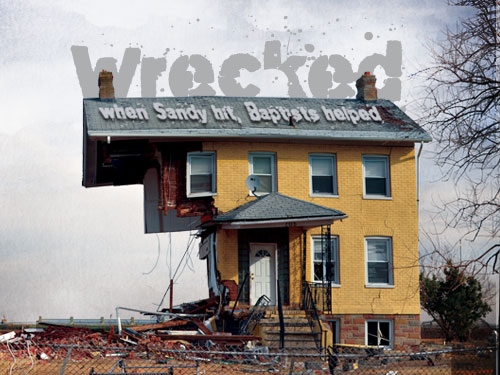 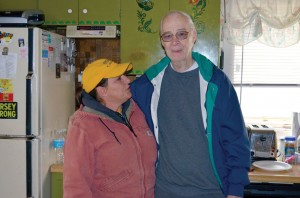 Chaplain Dee Denton of Noble, Twelve Corners visits with homeowner Donald Smith as the Oklahoma mud out crew cleans out his basement. (Photo: Bob Nigh)

MIDDLETOWN, N.J.—Eighty-year-old Donald Smith stood tall in the kitchen of the modest home in which he has lived his entire life and visited quietly with chaplain Dee Denton of Noble, Twelve Corners as he tried to fight back tears of gratitude.

Down in the home’s brick-walled basement, Oklahoma disaster relief mud out volunteers from Union Association busily worked Nov. 16 to clean out a lifetime accumulation of Smith’s possessions that had been ruined by floodwaters brought on by Hurricane Sandy.

“This house is 89 years old. My father worked for a railroad, and he bought it during the Depression,” Smith related. “We were camped out on Ideal Beach by Raritan Bay. A friend of my father needed money, and my father was one of the lucky ones who was working. My father didn’t want to buy it, but he finally did because the man needed the money to survive.

Asked what he thought about the help he was receiving, Smith’s lips quivered and he said, “They’re a lifesaver,” before he finally broke down in tears and then continued as he wept, “I don’t want to lose my house.”

Almost three weeks after the superstorm swept through northern New Jersey, Smith still had no power to his home. Federal Emergency Management Agency officials had visited him once, and said they would be back after his basement had been cleaned out.

A few miles away, members of the chain saw crew from Rogers Association expertly felled and chopped up a 60-foot oak tree that threatened the home of Robert Hermano, who must rely on the help of specially-designed appliances to be able to use his hands after complications suffered during “routine” heart surgery some time ago.

Team Blue Cap Danny Cotner from Claremore, New Creation, shared the Gospel with the homeowner, who “is a seeker,” Cotner said. While Hermano did not accept Christ as Savior, Cotner said he was confident the seed had been planted.

As Thanksgiving approached, Oklahoma had dispatched a total of 156 disaster relief volunteers to this upscale New Jersey city in Monmouth County. The Baptist General Convention of Oklahoma’s No. 1 feeding unit was set up at St. Mary Catholic Church near New Monmouth Church, where the Incident Command Center had been established. 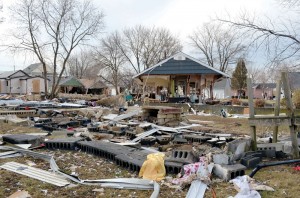 A home near Union Beach was destroyed, and another saw its exterior walls swept away by the storm (Photo: Bob Nigh)

In addition to the state’s big feeding unit, the Arbuckle and Owasso feeding units were on site at one time. The footprint of the kitchens is more than 2,700 square feet. New Monmouth church was providing sleeping quarters for the Oklahoma volunteers and a few from Tennessee. Also, the shower and laundry trailers from Chandler, First were stationed near the ICC.

As of Nov. 19 the units had provided 814 showers and washed and dried 733 loads of laundry since they arrived on Nov. 4. Margie Urquhart from Eufaula, North Fork, who, along with her husband, Audie, ran the laundry unit, said the couple had washed and dried more than 400 loads of clothes during one eight-day stretch.

“The most was 87 loads in one day!” she exclaimed.

“Every kitchen in New Jersey except ours is closed now,” he said. “Oklahoma is committed to stay as long as we need to. That’s just who we are and what we are going to do. Also, I have mud out teams scheduled until almost through Christmas.

“We’re preparing nearly 8,000 meals per day, and the lights are slowly coming back on, but if you get just a few feet off the coast, there are thousands of people with major problems. Some of their homes are still standing, but they’re condemned. The local authorities won’t let them go back in and they’re destitute.

“We have come farther than anybody, but we’ll stay as long as we’re needed.”

Porter was notified on Nov. 20 that the Oklahoma kitchen would be shut down following the noon meal on Sun., Nov. 25. Mud out teams will continue to serve, however. 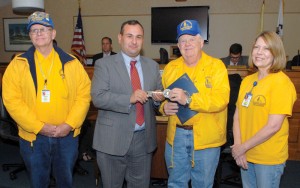 Besides impacting life from a practical standpoint, disaster relief volunteers are making an impact in life changing ways, said Karr, who related an example.

“A Tennessee crew set up at Union Beach. One day a couple brought in some laundry for them to do,” he said. “One of the team members was visiting with the woman, and the man was standing behind them with a scowl on his face.  They talked for awhile and he prayed with them. The next day, the man came back and asked to speak to the crew member again. He said, ‘because you prayed with us last night, you prevented me from killing myself.’ That’s how despondent that couple was. They had lost everything. They come back every day now and visit with the team.”

“I explained why we were here, and a told them a little about our organization and our relationship to the Red Cross,” he said. “Then we fed a little more than 100 people lunch and ate with them. We had some time  to fellowship with the church members and get to know them.”

Many of the Oklahomans said they were uplifted by the gratitude expressed to them by the New Jersians.

“Everywhere we go, people encourage us and say ‘we appreciate you being here,” Cotner said. “We had to go around the corner one time and check out a house and a lady came out next door and asked us if she could get us some coffee or water. We weren’t even doing anything for her, but she was so grateful. Everywhere we’ve gone, they’ve given us donuts or coffee or water; they want to do something to show their appreciation.

“Every morning we’d go to a house, the owner would disappear and come back with donuts and coffee. I’ve never been to a place where the people are more giving, and it’s shocked me. I’ve had to change my perspective of New Jersey people.

“I had one lady tell me, “Yeah, I know we have this bad reputation, but we’re not like those people up in New York!”

“I want to thank Oklahoma Baptists for providing the money to be able to send so many teams in response to Hurricane Sandy,” Porter said. “It took several thousand dollars just to get our teams here; we rotated teams every two weeks, and we wound up with more than 100 Oklahomans who came to help and alleviate the pain and suffering people have had.

“We have also brought the Gospel. We’ve seen four people accept Jesus Christ, and we have planted hundreds of seeds of the Gospel here. It’s all been because Oklahoma Baptists have been faithful to give and to pray and support and send. This is the most destructive storm to ever hit the coast of the U.S. I want to thank the volunteers who have come and served.”