Worship – Celebrate the Glory of God 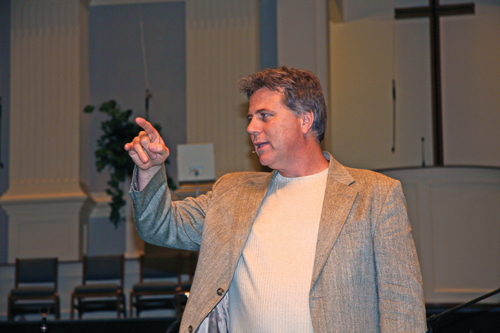 Focusing on Nehemiah, chapter 12, where the prophet led the people of God to celebrate the dedication of the rebuilding of the wall around Jerusalem—which had been completed in 52 days—Jim Shaddix, pastor of Denver, Colo., Riverside, exulted in the fact that as verse 34 says, “the joy of Jerusalem was heard far away,” as he addressed those attending Church Music Oklahoma, July 31-Aug. 1 at Oklahoma City, Southern Hills.

“Wouldn’t you have loved to have been there?” Shaddix asked in the conference’s opening general session Friday morning. He then added, “Actually you are, every time you come together for worship. When you do, you celebrate the glory of God. That’s what worship is.”

So, why do we worship? For several reasons. We worship, Shaddix said, because God is worthy of the glory of people.

“We worship by dedicating ourselves to God, not just our song,” Shaddix said. “We do it through the transfer of ownership of all we have and are to God.”

Shaddix said the Israelites did just that as they celebrated with all they had and with pure hearts, as it says in Nehemiah, “At the dedication of the wall of Jerusalem, the Levites were sought out from where they lived and were brought to Jerusalem to celebrate joyfully the dedication with songs of thanksgiving and with the music of cymbals, harps and lyres . . . . When the priests and Levites had purified themselves ceremonially, they purified the people, the gates and the wall.”

Another way we worship is to express joy over Who Jesus is.

“We need to do what Paul says in Phil. 4:4, ‘Rejoice in the Lord always. I will say it again: Rejoice!,'” Shaddix said. “One of the hardest jobs is getting people to realize joy has nothing to do with happiness; it supercedes circumstances . . . our joy is not in this life, it is in Jesus!”

Shaddix said worship is “offering Jesus thanks for what He’s doing for us, not what we’re doing for Him.”

Shaddix focused on the “how” of worship in the conference’s final general session Saturday morning.

“We do it by pouring ourselves into it,” he said. “Everything we’ve got. Everything we are. It took a highly organized plan, preparation and effort for the Israelites to dedicate the wall. It involved two great choirs, and great sacrifices, but produced great joy, a joy that was heard far away.”

Second, we worship with a variety of musical instruments and expressions, Shaddix said.

Shaddix said “God is seeking a generation that will rise above petty criticisms and personal preferences” about worship styles, and do as it says in Col. 3:16, “Let the word of Christ dwell in you richly as you teach and admonish one another with all wisdom, and as you sing psalms, hymns and spiritual songs with gratitude in your hearts to God.”

To do so requires no small amount of preparation, he cautioned.

“Our God deserves some thought put into the worship preparation process, utilizing whatever resources we have,” he urged. “It deserves planning.

“And, it also requires spiritual preparation, as the Levites did in Nehemiah 12, verse 30. They purified themselves and everything that was a part of the worship experience.”

Shaddix also reminded pastors and those present that preaching and hearing the Word of God is every bit as much worship as singing a song or playing an instrument.

“There is no worship outside the revelation of God,” he stressed.

The second general session of the conference Friday afternoon featured guest artist Keith Getty, who discussed the art of hymn writing. Getty, who has been writing what have been described as “modern hymns” since 2000, said he has two goals in mind when he writes a hymn.

“First, a hymn helps us express the bigness and vastness of the God of the Bible,” he said. “Second, I write songs that each generation can sing; songs which unite the body of Christ.

Getty, whose musical background includes classical guitar and flute, began composing when he was 10 years old. He took those present through six songs he and his wife, Kristyn, and Stuart Townsend had written, explaining the concepts behind each piece. After he did, the audience sang each piece.

They included “In Christ Alone,” “O To See the Dawn (The Power of the Cross),” “Speak, O Lord,” “Behold the Lamb (The Communion Hymn),” “Come, People of the Risen King” and “By Faith.”

Getty, who grew up near Belfast, Ireland, writes most of the music, while Kristyn and Townsend pen most of the lyrics. “By Faith” is the group’s latest song, finished about three months ago. It is based on the heroes of the faith in Hebrews.

“By faith, we stand on the shoulders of those who have gone before us,” Getty reminded those present.

The Gettys also joined with a mass choir and the Oklahoma Baptist Symphony in presenting a special concert Friday evening.