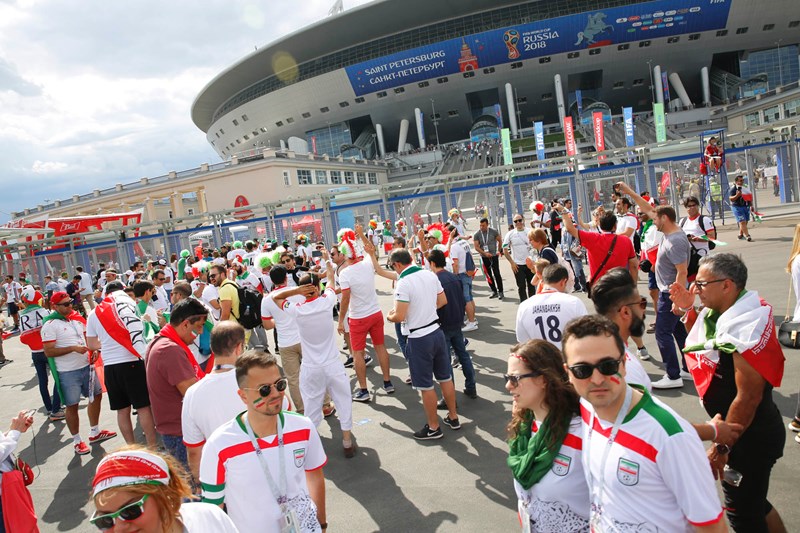 “I don’t know anything about soccer,” said Justin Pierce, assistant professor in instrumental music at Oklahoma Baptist University. But “God orchestrated everything and lined it up” for members of the university’s Bison Jazz Orchestra to take a mission trip to St. Petersburg, Russia, at the height of World Cup play. 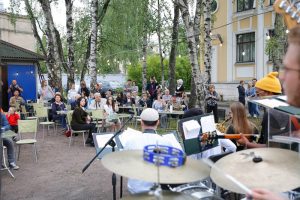 A jazz band from Oklahoma Baptist University performed and shared the Gospel at venues around St. Petersburg, Russia, during the June 14-July 15 World Cup. [Photo by Jerry Barnwell]

The June 14-July 15 World Cup has featured 32 teams playing in 11 Russian cities, including St. Petersburg. The World Cup final, featuring a matchup between France and Croatia, will be held Sunday in Moscow.

Former International Mission Board worker Jerry Barnwell teamed with the OBU jazz band in the outreach effort as part of a mission team from Gateway Church, a nondenominational congregation in Austin, Texas. Barnwell served with the IMB for 17 years in Europe.

Together, the two teams planted Gospel seeds at their concerts and camps, with at least two young men they worked with coming to faith in Christ following the teams’ departure, Barnwell told Baptist Press. The teams also built relationships and engaged in Gospel conversations at “fan zones,” where locals and tourists gathered to watch soccer matches. 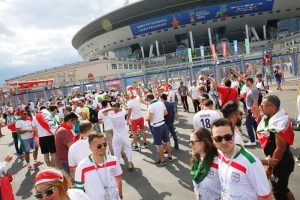 Despite Russian legal restrictions on evangelism, evangelicals found way to reach out with the love of Christ during World Cup matches in St. Petersburg. [Photo by Jerry Barnwell]

Barnwell remembers one fruitful spiritual conversation at a jazz club the mission teams rented for an afternoon concert.

“We had a big party on the rooftop” of the club for attendees of soccer and volleyball camps, Barnwell said. “We just had chances to talk and then walk downtown, where there was one of the fan clubs, and we watched one of the games.”

Pierce said the jazz band presented the Gospel at its concerts and shared testimonies of how God has worked in band members’ lives through music.

“Our music” — which included jazz standards by Duke Ellington and Sonny Rollins — “was sort of an exciting, unusual thing for [Russian] students to hear,” Pierce said, noting some Russian youth “may have never had interaction with a church in their life” before encountering the believers from OBU and Gateway. 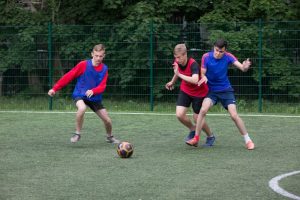 Youth soccer camps were among the ministries conducted by missions teams in St. Petersburg, Russia, during the 2018 World Cup. [Photo by Deb Robison]

While some Christian groups have reported anti-evangelism crackdowns during the World Cup by Russian authorities, Barnwell and Pierce said their groups did not experience religious liberty restrictions. Barnwell noted, however, that Russia’s 2016 law curbing evangelism could yield a government crackdown at sports camps not hosted by authorized religious institutions.

The 2016 law requires that evangelism be confined to officially-recognized church buildings and bans distribution of certain types of religious messages through mass print, broadcast or online media.

In an effort to abide by those restrictions, Russian churches have hosted outreach-oriented viewings of World Cup matches in nearly 400 locations across 50 cities, reaching some 10,000 people, Religion News Service reported.

Three evangelism teams with the Christian group Mission Eurasia were detained in Moscow, Kaliningrad and Ekaterinburg for talking with people about Christ and distributing literature in public places, RNS reported July 9. The teams were released without any charges being filed, but their literature was confiscated.

Sally Hinzie, a member of Houston’s First Baptist Church who coordinates trips to Russia for the local Union Baptist Association, told BP “harassment of the churches [in Russia] is increasing,” and U.S. mission teams “have to be very, very careful.”

Despite the restrictions, Pierce said, the World Cup seemed to open a unique door for evangelism.

“When a country hosts the World Cup, they are putting their best foot forward,” Piece said. “So the citizens are very welcoming to foreigners.”