NASHVILLE, Tenn. (BP)—“We have more knowledge at our fingertips than ever before, but our kids and grandkids still need us to teach them about certain things, and missions is one of those things,” said Sandy Wisdom-Martin, executive director of national Woman’s Missionary Union (WMU), as she addressed messengers and guests at the 2021 SBC Annual Meeting June 16. “When we were growing up, many of us learned about missions. It changed our worldview and our view of the world. 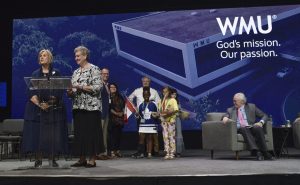 “As a child, from my small church in southern Illinois, I experienced God’s heart for all the nations,” Wisdom-Martin said. “Every week I traveled around the world to learn what God was doing. I was taught to pray, to give sacrificially, to do missions, to tell others about Jesus, and maybe most importantly, to take my part in God’s plan.”

Connie Dixon, who was elected president of national WMU on June 13, agreed.

“Our kids still need us—now more than ever,” Dixon said. “If we don’t teach our kids to value missions, who will fulfill the Great Commission when we are gone?”

Speaking of the importance of missions in the life of a child, Jerry Haag, president and CEO of One More Child, said his love for missions began in Royal Ambassadors (RAs).

“My RA leader, Mr. Biggs, taught me a love for the outdoors and God’s creation,” Haag said. “Maggie, one of the women in our church, taught me the power of prayer.

“As I look back, I remember loving and memorizing God’s Word and seeing Scripture come alive. I also remember learning about missionaries, and knowing someday, I wanted to be a fulltime missionary or be involved in missions.”

Haag said as a 15-year-old, his parents took him on his first mission trip to Brazil. It was there that the Great Commission and Acts 1:8 became very real to him.

“Today at One More Child, we work all over the world with thousands and thousands of sex trafficked children, marginalized children and hungry children,” Haag said. “That passion for missions instilled in me by the WMU has carried me down dirt streets in India to leper colonies where WMU has provided clean water wells, into the poverty of townships in South Africa, into the pain and brokenness of children in foster care and sex trafficking here in the United States, and to children and families that are just hungry. I praise the Lord that I had parents and adults in my life that helped bring missions alive to me.”

Liz Encinia, executive director-treasurer of Kentucky WMU, said, “For me, missions discipleship was more than just a program in the church. It laid the foundation of what it meant to actively further the Great Commission as a Southern Baptist.”

She said the lessons helped her understand the challenges facing missionaries and ways they told others about Jesus, and missions projects offered her practical steps to put her faith into action.

“But most of all,” Encinia said, “missions discipleship provided a model of godly leaders who not only taught about missions, but lived it out in their daily lives. Their obedience made missions come alive right before my eyes.

“Missions discipleship was about developing the very heartbeat of Jesus, seeing the world through His eyes, and responding in obedience to the Gospel call. When you teach children about missions, you help prepare the next generation of Southern Baptists to take the Gospel to the nations.

For generations, WMU has sought to engage all ages in missions discipleship. Specifically designed for children in grades 1-6, a new curriculum previewed by Wisdom-Martin and Dixon will be available this fall called Missions Journey: Kids.

“Missions Journey: Kids will captivate your children’s minds and hearts as they immerse themselves in a new culture each month,” Dixon said.

Missions Journey: Kids is written by Southern Baptists for Southern Baptists with rigorous educational and theological vetting. You asked us to simplify for the ability to customize. We heard you. Leaders will appreciate less preparation time while feeling empowered to choose what’s best for their groups.”

“Our children grow up so fast,” Wisdom-Martin said. “In what seems like the blink of an eye, our little ones are grown and impacting the world for Christ. Or are they? What lessons are our children learning? The Gospel is clear. It says, ‘Go and make disciples of all nations, baptizing them in the name of Father and of the Son and of the Holy Spirit.’ They will gain God’s heart for the nations if we teach them. And they will have fun along the way.”

View all posts by Julie Walters