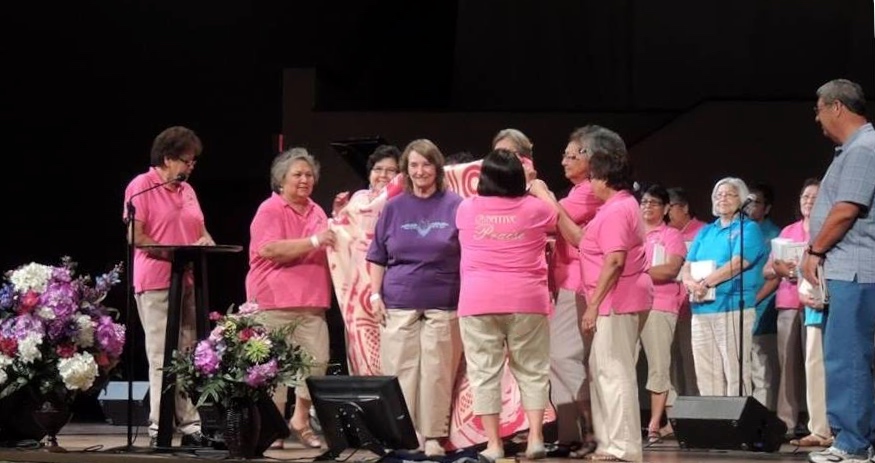 Willene Pierce, one of the key leaders in Native American work in Oklahoma—and around the world, in fact—will be honored when the Willene Pierce Memorial Conference is held March 19-21 at Oklahoma City, Glorieta.

Pierce, who passed away March 18, 2014, started a ministry called The Native American LINK, Inc. (Living in Neighborly Kindness), and was the founder of the Native Praise Choir, which represents women from more than 20 tribes singing in the Cherokee, Muscogee and Choctaw languages.

“Willene became acquainted with our people, first coming to Oklahoma from Kansas with her grandmother as a young girl, assisting with Vacation Bible Schools among Choctaws in southeast Oklahoma, then returning again as a teenager, then as a college student at Oklahoma Baptist University,” said Augusta Smith, who succeeded Pierce as LINK director. “Her best friends in college were Indian students. She joined the Indian Club, and even joined Sallateeska Church, an Indian congregation.

“Willene kept our people in her heart, answering God’s call to return to Oklahoma in 1998 to begin the LINK ministry.  Although it began as a women’s Christian ministry, the work of the organization focuses on family, leadership and spiritual development.

“She left a rich legacy in the hearts of many who knew her. This national conference, designed for both men and women, native and non-native, is a fitting tribute to her vision for our Native American people. Conference speakers, those who share testimonies, and workshop leaders include individuals who knew Willene personally, and the workshops are designed for spiritual growth. She continues to impact us today.”

Smith worked closely with Pierce before Pierce passed away.

“My husband, Mike, and I were so blessed to be mentored by Willene for nine months before her death, once we moved into our positions as director and treasurer,” she said. “I did some Bible study on our chosen Scripture of Acts 20:32 for this conference, and I was so encouraged by Paul’s parting words of encouragement to the people of Ephesus. Mike and I had a good discussion about it and its parallel relationship to Willene. I still can hear her many conversations with us about matters concerning the LINK ministry. I keep those in my heart.”

Music will be directed by Shirley Falls, a praise team consisting of Connie Foreman, and Wayne and Lucille Harjo, with instrumentalists: Robert Deere and Dylan Mateo. Special music by Pam Wesley, Shirley Falls, and, of course, the Native Praise Choir.

• Ministry Projects—Friday afternoon will be an opportunity to participate in various ministry projects. Disposable baby diapers and baby wash cloths will be collected. Crafts sessions also will be available.

• Awards—Awards will be presented during the Saturday morning session for churches/individual(s) which traveled the greatest distance; churches with the highest attendance, and churches with pastors in attendance.

Cost of attending the conference is $40 before March 1 and $45 after that. For more information, call 918/931-2218, or email nativeamericanlink@gmail.com.