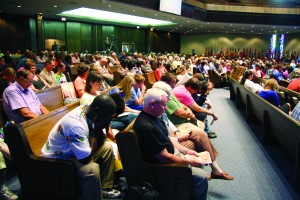 Hundreds gathered for prayer and worship at the E3 missions celebration at Bartlesville, First.

BARTLESVILLE—Hundreds of members from at least 28 churches took part in the Washington-Osage Association Missions Conference Sept. 25-30. The theme for the conference was “E3,” meaning “encounter, equip and engage” in the faith.

Paul Koonce, director of missions for Washington-Osage Association, recruited special presenters from various walks of ministry, including missionaries from Africa to Colorado, Oklahoma all the way to East Asia.

“It had been my prayer all along that this would be more than just a missions conference,” said Koonce. “What we have experienced over the past two weeks, and specifically during the last 3 days, is a revival of commitment to the Cooperative Program and being strategically engaged in missions.”

Churches from Pawhuska to Nowata took part in the multi-day event, which featured times of prayer, worship and missions mobilization for every age.

Bartlesville, Southern was the site for the kickoff event. The church also held a worship service in which four languages were displayed, according to Pastor Paul Rummage. “In this service, God was worshipped in English, Spanish, Hindi and Shona,” said Rummage. “God is doing something amazing in this association, and we want to join Him through missions around the world.

“The Great Commission was not given to a missions agency; it was given to every follower of Christ,” added Rummage.

On Monday evening, Bartlesville, First was the site for the missions celebration, where Pastor Charles Malekano preached from Isaiah 6, praying the “floodgates would open,” as pastors and lay people would commit themselves to say, “Here am I, send me, Lord.” 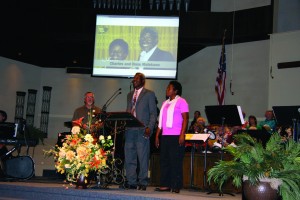 “In our Mission Celebration we had more than 400 attend. The personal encounters and experiences with our mission partners over the past two weeks have ignited a passion for personal involvement in missions in the hearts of so many,” added Koonce.

Greg Fort, International Mission Board missionary from Zimbabwe also spoke, challenging E3 participants to “engage the silence,” that is to say the 3,000-plus people groups who have not yet heard the Gospel in their own language.

At the conclusion of the Missions Celebration, Koonce led a “Beautiful Feet” presentation, in which each missions partner was presented with the gift of a new pair of shoes.

“As the missionaries put on their shoes and go about their daily ministry the support they feel from the laces and soles are to be a reminder of our prayers and commitment to ‘hold the ropes’ for them,” added Koonce. “We had 1,000 pairs of shoe laces imprinted with ‘How beautiful are the feet of those who share the gospel’ for people as well.” 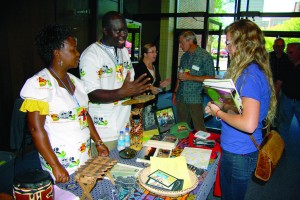 Isaac and Esinath Mabvumba of Zimbabwe, Africa, explain their ministry at the Monday missions fair at Bartlesville, First, which showcased various ministries.

Artie Hudson, Jr., Pastor of Pawhuska, Calvary, was one of the many participants who walked away forever changed. “God used the E3 Missions conference to renew my spirit for sharing the Gospel,” said Hudson. “Occasionally, I allow the busyness of ministry to dampen my passion for going. During the celebration service, He reminded me of the original passion I had when I surrendered my life to the ministry of the Gospel. That night, I left encouraged and refreshed.”

With flourishing missions partnerships in the United States and around the world, the Washington-Osage Association is setting the standard high for a missions-minded approach.

Koonce sees the mission field as white to harvest. “We just want to be faithful and play our part in what God is doing throughout the world,” said Koonce.