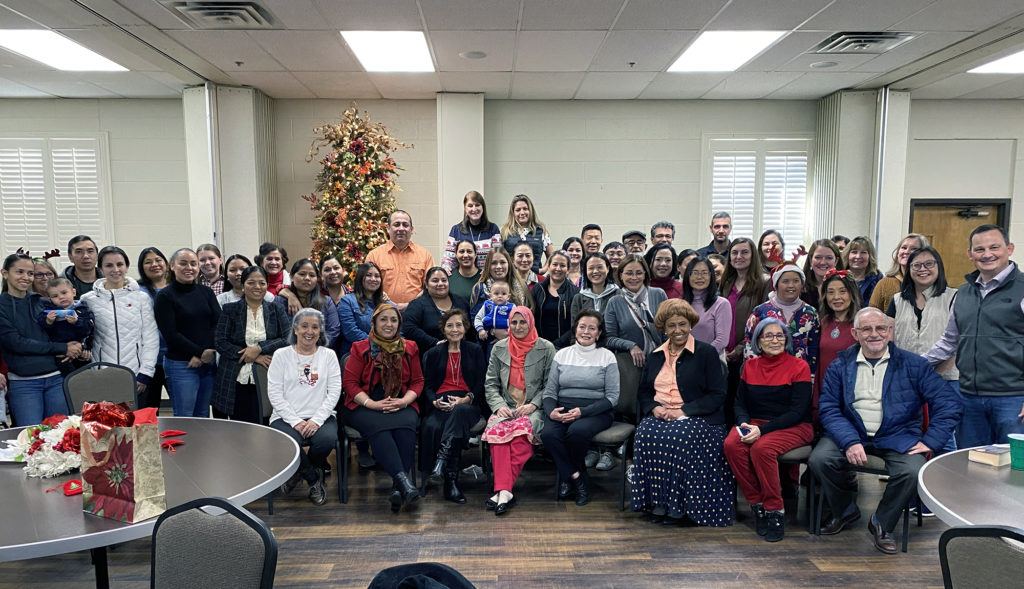 Above: Students in the ESL program of Tulsa, South Tulsa gather for a Christmas luncheon. The church offers 54 hours of ESL training each week in three locations.

TULSA (BP)—Tulsa, South Tulsa paid off its $2.2 million dollar debt in 18 months so it could focus on missions.

“I felt it was really important to start off on the right foot,” Eric Costanzo told Baptist Press. He’s been South Tulsa’s pastor since 2016. It’s his first senior pastorate. He started the debt-payoff thrust within his first six months. 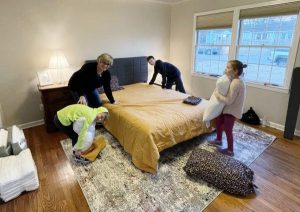 Members of South Tulsa set up a house for a refugee family.

“The debt service was costing us a lot,” Costanzo said. “So much ministry funding has come from paying off the debt and not having to pay the bank every month.”

The church’s outreach includes at least a dozen local ministries and just as many international ones. Missions absorbs about 36 percent of total giving, starting with the Cooperative Program (CP), the way Southern Baptists work together in worldwide missions and ministries.

“We’ve been giving more than 11 percent (through CP) for several years,” Costanzo said. “It’s a longtime commitment for this church and for me. As Southern Baptists, the Cooperative Program is at the heart of what we do to accomplish kingdom work, instead of everybody doing their own thing.

“We don’t always see where all those dollars end up, but we trust if we’re faithful in giving the money and resources, they will go to places we’re not able to go. I want to say to fellow pastors: Commit to the Cooperative Program. If you’re going to be Southern Baptist, commit to CP. If every pastor did, just imagine what that would do for the IMB (International Mission Board) and church planting.”

About 1,100 people participate in Sunday morning worship at South Tulsa. Last year the church baptized 61, the second-highest number in its 40-year history. The church partners hands on and financially with several other organizations in the metro area of around 1 million people.

“We’re trying to go where the Lord is working; we’re not trying to just do our own thing,” Karen Pirtle told Baptist Press. She’s been a member for 34 years, associate youth minister for 13, and minister of missions for the last three. 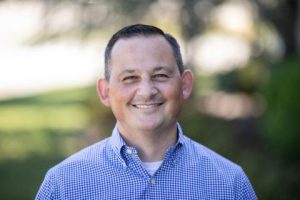 “One thing that stands out here is our English as a Second Language (ESL) program,” Costanzo said. “It is our key local ministry to internationals. We invest a lot of time and resources into international families.”

“We want to provide great ESL to improve their lives and we want to impact their lives for Christ,” Pirtle said. “The first step for that is building relationships.

“There are times we’ve had more than 40 countries represented,” she continued. “We have Hindi, Muslim, Christian—all different religions—in our building every day of the week, and they are comfortable here. We do not practice heavy-handed evangelism, but we talk about the Lord and Scripture often. They’re here for ESL, but they know who we are and what we’re doing, and any opportunity we get, any questions, we readily respond, but we’re not going to hound them. It’s all in the relationships.”

For five years, the church also has hosted a weekly citizenship class led in part by an immigration attorney who helps with government paperwork, plus sewing classes for immigrant and refugee women.

South Tulsa paid off its $2.2 million dollar debt in 18 months so it could focus on missions.

The focus on internationals was at the encouragement of the pastor in his first year at South Tulsa. Costanzo knew of the growing diversity and growing number of refugees in the metro area, he said.

The church first began working with refugees from places like Myanmar, Syria and Iraq, and most of the ministry was done through local schools and in apartment complexes. As the ministry expanded, the church sent teams to work with Syrian refugees living in Jordan.

Knowledge and experience from years of working with refugees was put to the test last October, when refugees from Afghanistan arrived day after day for seven months, about 860 of them in all. They’d been invited by Oklahoma’s governor.

Among several South Tulsa ministries that started with greeting each traumatized, often fearful Afghan at the airport each day, the church renovated three houses, then stocked them with beds and supplies— linens, pots and pans, etc.—for the refugees. Furniture and other supplies poured in from the community.

“All different churches and denominations have worked together,” Pirtle said. “It’s really cool and really brought our community together.”

Five “wrap-around families” from the church each take responsibility for an Afghan family, which might include up to 10 children. They help with school, medical and government forms, take them to various appointments, help with clogged toilets or whatever, and all costs are covered by the church.

“The interesting thing is, even though they don’t know the language, they want to tell their story,” Pirtle said. “We use translators and translation apps to help in the process.”

In May, South Tulsa welcomed its first family fleeing from the war in Ukraine: a pregnant woman and her young child. The church also works directly with partners in Ukraine and nearby nations to which refugees have fled.

Venezuela and Guatemala are two other major emphases for South Tulsa. In Venezuela, the church has become the largest conduit for charitable medicines to enter because of church contacts formed over 25 years by a South Tulsa member. In wholesale dollars, the total to date exceeds $14 million.

The IMB gave South Tulsa Baptist $250,000 for medicines. Two other major Christian charities—Blessings International and MAP International—have added to the total, and South Tulsa has paid shipping costs in excess of $500,000.

“These agencies are helping us because we are the only ones with a proven method of successfully placing these medicines into the hands of people who desperately need them,” Pirtle said. “We don’t know how long the opportunity to minister this way will last, so we’re making hay while the sun shines.”

South Tulsa anticipates shipping about 1,400 boxes of medicine, each weighing about 85 pounds, to Venezuela this year. Each person’s order comes with a yellow card that gives the Gospel message. Over the last 15 months, thousands have made professions of faith.

South Tulsa also has various ministries and partners in East Asia, northeastern India, Ukraine, Jordan and several other nations. The church sent out at least seven mission teams a year, until the COVID-19 pandemic.

South Tulsa provides GAs, RAs and Mission Friends groups so children can come to “understand what our call is, the Great Commission,” Pirtle said.