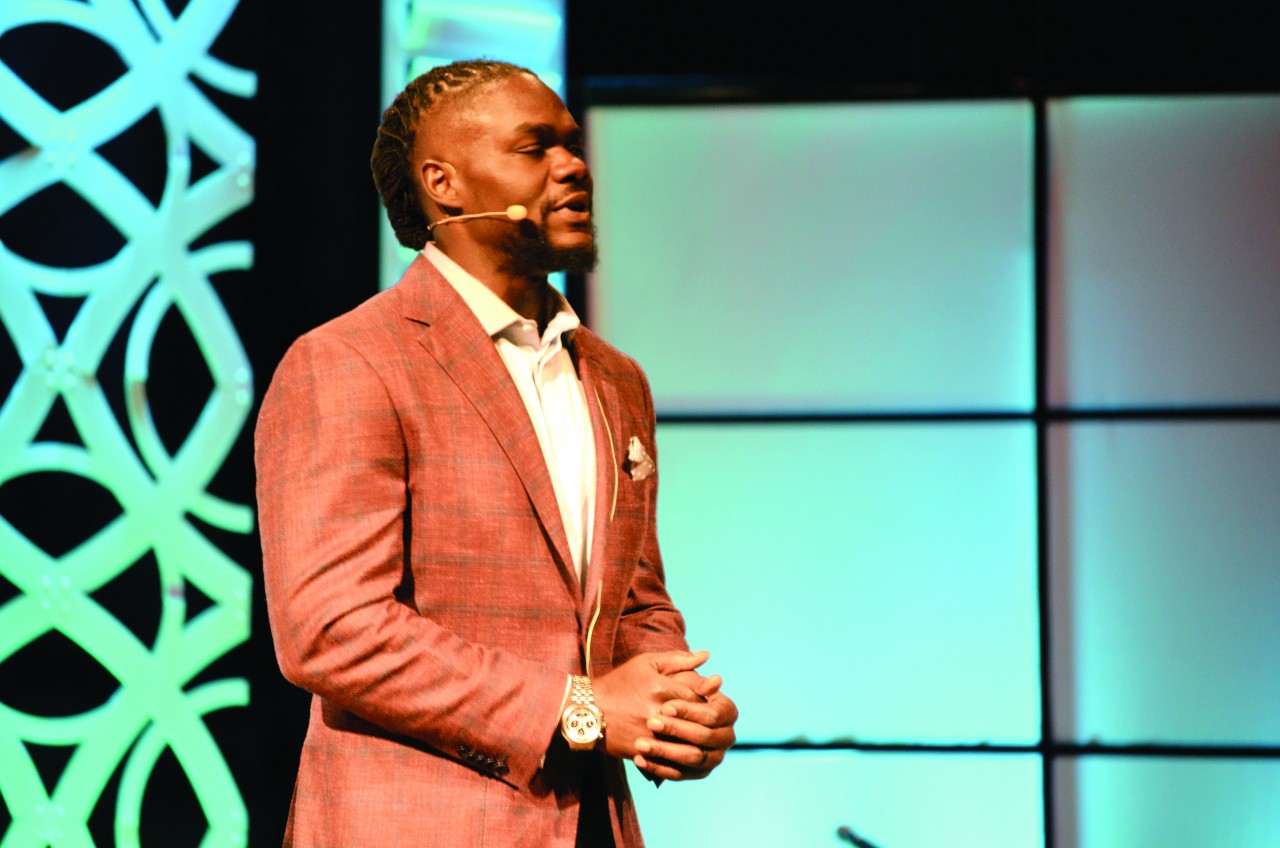 DAVIS—Many in Oklahoma remember Tommie Harris as a dominating defensive lineman for the University of Oklahoma (OU). He played during a successful stint with the Sooners, 2001-03, reaching a major bowl every year.

Harris was one of the few players in OU history to play every game his freshman year. He also was a key performer for the 2003 squad that was considered one of the most talented Sooner teams ever to take the field. He received the Lombardi Award that year, offered to the nation’s best lineman.

In 2004, Harris was drafted by the Chicago Bears in the first round, and he played six years with the Bears. In 2006, Chicago was having a banner year with Harris on the defensive line. The Bears went on to play in the Super Bowl that season, but Harris suffered a season-ending injury in Week 13.

Harris was a three-time Pro Bowl player, in 2006, 2007 and 2008. He also played for the Indianapolis Colts and the San Diego Chargers. He decided to end his NFL career in 2012 after the sudden death of his wife Ashley.

Today, Harris is a Christian speaker and leads a ministry for men called The Locker Room, which helps build fellowship groups for men across the country and offers Bible study material for the groups to use when they meet.

The Baptist Messenger met with Harris for an exclusive interview while he was a featured speaker during the Men’s Rewired Conference at Falls Creek Baptist Conference Center in Davis.

Baptist Messenger: What do you remember about playing for OU during the 2003 season?

Tommie Harris: I’m getting chills when I think about (that year). We were going to be the best in college football. We were unbelievable. I played with some great players. Many of them won awards that year. We took home every award.

Messenger: One highlight play of your OU career was your fumble return during the UCLA game in 2003, as you ran it back a good distance after it popped in the air and you grabbed it. What do you remember about that play?

Harris: I just remember stealing the ball and (OU safety) Brandon Everage making a heck of a hit. I thought I was a running back, but if you look at the film, (it looked like) I didn’t know what to do with the ball. They said that was one of the main clips that got me drafted.

Messenger: What do you remember most about your time at OU?

Harris: My greatest memory was Coach (Bob) Stoops, just being such an amazing leader. That whole team, we’re still family today. Coach Stoops had his retirement, and everybody got together. We had a great time, and it’s like he never left. The culture, the heartbeat of the team will always be related to Stoops. For him to hand it over to Lincoln Riley just shows you how great of a strategic man he is.

Messenger: What can you share about being a Christian and playing professional sports?

Harris: My spiritual journey has been tough, but it’s a part of the spiritual journey in Christ. You expect things to be easier, but I learned to give all my problems to Him. I know how to hit my knees. Instead of trying to use my mind to outthink, I pray. My new stance now is in prayer. That’s how I live and walk through life.

Messenger: What do you remember about playing for the Chicago Bears during their Super Bowl year?

Harris: That was a hard year for me. I popped my hamstring against Minnesota. I was frustrated and didn’t like who I was becoming, so I asked God to change me. Then the next week, I was in a Gatorade commercial with Tiger Woods and was up for Defensive Player of the Year.

Messenger: What do you tell football players who are starting their NFL careers?

Harris: I let them know this is a job. It’s the greatest job in the world, and take advantage of it. And you’re not rich—not yet. You just got a good job. You’re only rich when you know how to let your money work for you. You’re still working for your money. But starting out, just know you’ve got a good job, save your money and wait to invest it after you’re finished.

Messenger: Now that your football career is over, what are you doing?

Harris: I’m just going where God leads me. I thank God that He allows me to speak.

Messenger: And what is your message when you speak?

Harris: Believers should seek believers. We are followers of Christ Jesus. I believe in Christ, and His nature and behavior is what changes the world. If you can just catch a glimpse of His behavior, things begin to change. I just try to be like the disciples. They knew if they could just hang around Him long enough, their lives would change. Jesus came, and they met someone who did different stuff. He exuded different attributes, and He cared about people.

Harris: I have a platform called The Locker Room. I travel around and build huddles in communities. We find mentors who are likeminded with Jesus and have them meet up with people who need Jesus. My website (tommieharrislockerroom.com) offers material they can use in their huddle groups. By the end of the year, I have a plan that we meet together during the Super Bowl.

Messenger: You shared a lot of Scripture while you were speaking at Men’s Rewired. What is one of your favorite passages?