Together as ‘ONE’: 115th Annual Meeting of Oklahoma Baptists affirms Fisher, displays unity 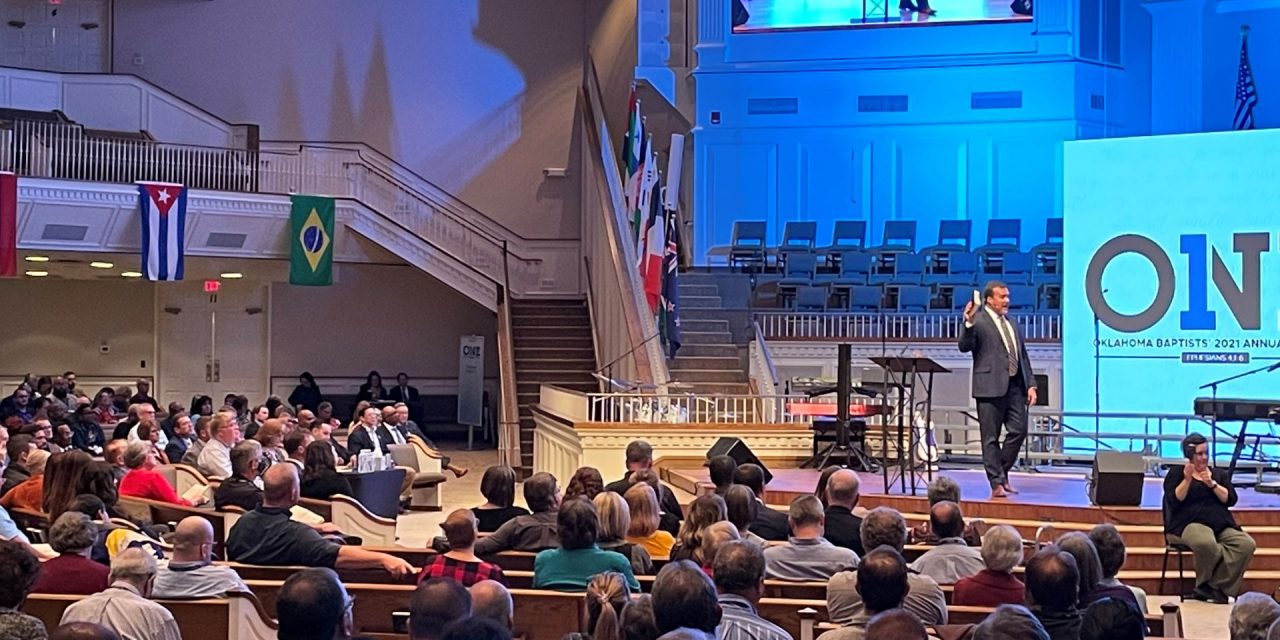 More than 700 Oklahoma Baptist messengers gathered Nov. 15-16 at Oklahoma City, Southern Hills for the 115th Annual Meeting, which was of historic importance. On Monday evening, messengers unanimously voted to approve Todd Fisher as the new executive director-treasurer and held a special installation service.

Under the Annual Meeting theme of “ONE,” Oklahoma Baptists came together in unity through times of preaching, prayer, ministry reports and other convention business. Oklahoma Baptists from across the state attended the annual meeting, with 727 registered messengers from more than 300 churches, in addition to others in attendance. 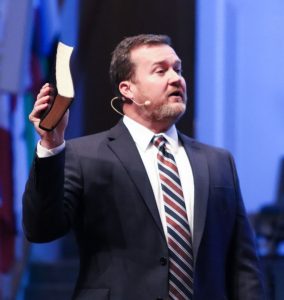 Fisher was presented to messengers during the opening session by executive director search committee chairman, Michael Staton, who pastors Mustang, First. With his approval by messengers, Fisher, who has served as pastor of Shawnee, Immanuel since 2003, becomes the 10th executive director-treasurer in state convention history.

As part of the installation service, a charge was delivered by Nick Johnson, pastor of Lindsay, First. Johnson said, “Another chapter will be completed in the history of Oklahoma Baptists. There will never be another 10th executive director-treasurer.”

He charged Fisher to pay attention to his conduct, his calling and his personal integrity.

Johnson said Fisher is to conduct himself not in isolation but one who is with the people, available to Oklahoma Baptists, especially pastors.

Johnson gave Oklahoma Baptists a similar charge to pay attention to conduct, calling and integrity. “We must be people of humility, not people of pride,” he said.

“I have never been more proud to be an Oklahoma Baptist than I am today.”

Following the charge, messengers spent time in prayer, laying hands on Fisher and his wife Jamy in prayer. Walter Wilson, pastor of Lawton, Friendship, and Andy Taylor, pastor of Broken Arrow, Arrow Heights, voiced prayers of consecration over the Fishers. 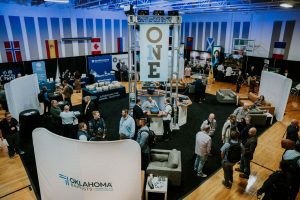 Messengers and guests took opportunities to fellowship in the Exhibit Hall at Annual Meeting.

In his inaugural address as executive director-treasurer of Oklahoma Baptists, Fisher preached from Eph. 4:1-6, which the Annual Meeting’s theme “One” referenced, and shared what will be his commitments to Oklahoma Baptists.

“Look at our culture today,” Fisher said. “We are so confused about so many things. This is why we need the truth of the Scripture to give us what is God’s truth about the sanctity of human life, the sanctity of marriage, gender sexuality and the evil of racism.

“Pastor, if you are a shepherd in this room, feed your people this Book (holding up his Bible).

“With unity, we show a lost world the power of the Gospel.” Fisher said he heard from Oklahoma Baptists, encouraging him in his new role to “help keep our state unified. Keep us out of the weeds, and keep us out of the ditches. And help us keep our focus on the main thing.”

He said the focus of Oklahoma Baptists needs to be missions, the Great Commission, the spreading of the Gospel, the reaching of communities in every corner of the state. He also emphasized church planting, church revitalization and discipleship practiced in churches.

“Our calling is to engage the culture with the Gospel of Jesus,” Fisher emphasized.

Also during his executive director’s address, Fisher said one of his first actions as executive director would be to work with the new officers and the board of directors to form as Sexual Abuse Prevention Task Force, which would focus on creating best practices in preventing sexual abuse in Oklahoma Baptist churches and ministry contexts, as well as how to care for abuse survivors.

With this action, Oklahoma Baptists becomes one of numerous state conventions to form a task force of special committee to addressing the pressing issue of sexual abuse. 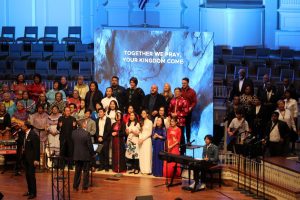 The theme of the 2021 Annual Meeting of ‘One’ focused on the unity believers have in Jesus Christ. Prior to Fisher’s executive director’s address Monday evening, a special time of worship featuring multi-ethnic, multi-lingual choirs were on display. Choirs from Asian, Native American, African American and Hispanic affinity groups each had vocal groups leading in worship. The worship time culminated in a mass choir of all groups coming together for a newly commission song, led by Randy Lind, worship and music ministry partner for Oklahoma Baptists. 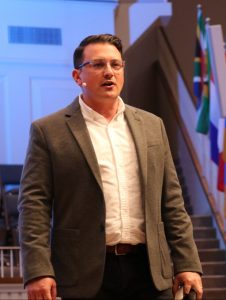 The two other featured preachers were Michael Butler, pastor of Chickasha, First, who had been serving as convention president and presided over the annual meeting and Moore, First Pastor Charlie Blount, who delivered the Annual Sermon.

In his president’s address on Tuesday morning, Butler spoke about how Christians can persevere in trials and suffering. Preaching out of Phil. 1:27-30, he said, “May we stand firm, strive together and suffer well knowing that fruit grows in the valley.”

Blount delivered the Annual Meeting Sermon on Tuesday afternoon, speaking toward the power of the Gospel to reconcile people and to reach people for Christ. Preaching out of John 13-17, Blount called attention to Jesus’ actions of praying for the unity of believers and for serving.

“If we want to be how God truly wants us to be, we need to learn to be servants,” Blount said. “Jesus washes the feet of His disciples. Here Jesus is showing us how truly important service is.”

Videos of the Annual Meeting sermons will be available in coming days online at oklahomabaptists.org/annualmeeting. 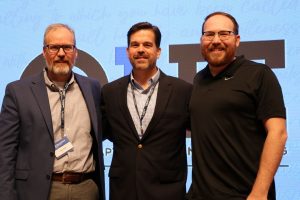 During the Annual Meeting, messengers approved reports from the Nominating Committee, the Finance Committee, in addition to hearing various ministry reports from the state convention. The Board of Directors report also was approved, which summarizes key state convention business, including “that the 2022 Cooperative Program allocation be distributed 43 percent Southern Baptist Convention, 42 percent Oklahoma Baptists and 15 percent Affiliates,” which is the current distribution formulae. The 2022 Cooperative Program objective is set at $24 million.

On Tuesday afternoon, the 2021 Resolutions Committee presented a report, featuring eight resolutions. Presenters included Committee Chair Owen Nease, who is pastor of Oklahoma City, Emmaus. Resolution topics included: “On Praying for the Executive Director-Treasurer”; “On Recognition of 75 years of Ministry by WatersEdge”; “On Biblical Unity”; “Praying for and Ministering to Persecuted Believers and Churches”; and “On Abortion and the Sanctity of Human Life.” An amendment to the resolution on abortion was approved by messengers, calling for the abolition of abortion. Other topics included: “On Responding to Sexual Abuse and Caring for Victims”; “For Advancing the Gospel Amid Challenges.”