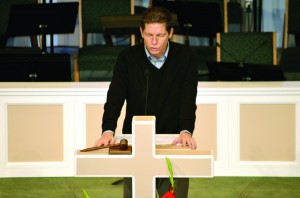 The theme “Together” was appropriate for the 2014 Baptist General Convention of Oklahoma (BGCO) Annual Meeting as 674 messengers met at Oklahoma City, Quail Springs Nov. 10-11. Through the many reports presented, sermons preached and business matters considered through the voting process, Oklahoma Baptists partnered together in demonstrating the importance of sharing the Gospel to the world today.

“I ask Oklahoma Baptists to pray for me this year,” said Dilbeck who also will be serving as second vice president of the Southern Baptist Convention in 2015. “This responsibility is a sacred stewardship, and I ask our Lord for the grace to be found faithful. As a lifelong Oklahoman, I am deeply honored for this opportunity to serve.”

Both Dilbeck and Ligon were elected by acclamation after they were the only ones nominated for president and first vice president. McMullen was elected second Vvice president in a close race over Doug McClure, pastor of Hugo, First.

Messengers approved the BGCO 2015 financial plan presented by Randall Kemp, member of Seminole, First and chairman of the BGCO Finance Committee. The adopted financial plan was set to $25,412,000.

Alan Quigley, team leader of the BGCO Church Outreach Team, and Cesar Garcia, pastor of Oklahoma City, Rivers of Living Water, gave a report from the Hispanic Task Force (HTF), of which Garcia is the chairman. The report stated the HTF set goals to baptize 3,000 new believers and plant 50 new Hispanic churches by the year 2020. More than 150 messengers and guests representing the 136 state Hispanic churches attended the Annual Meeting.

Building progress was addressed through reports given by Marty Harkey, BGCO chief development officer, and Scott Phillips, team leader of the BGCO Church and Family Equipping Team. Both gave information on the new buildings at Falls Creek Baptist Conference Center, which include the Mathena Family Event Center, the Thompson Family Lodge and the Jordan Welcome Center, showing details of each facility and photos of construction underway at Falls Creek, including raising of the monolithic dome on top of the Mathena Center. Phillips also reported on the new Baptist Collegiate Ministry property at the University of Oklahoma, which will be more accessible to campus dorms.

Nick Garland gave his address as current BGCO president. The pastor of Broken Arrow, First elaborated on the “Together” theme and spoke from the passage in Philippians 1, which emphasized the theme, “I always pray with joy because of your partnership in the Gospel.” 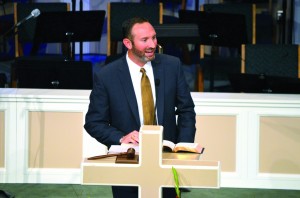 Garland continued sharing the partnership Oklahoma Baptists have with the sharing of the Gospel, throughout the history of Christianity and throughout the world.

Jason Allen, president of Midwestern Seminary in Kansas City, Mo., used Acts 4 as his text to address the topic of “We Cannot Stop Speaking” during the morning session, Nov. 11.

Allen said he has been reading biographies of U.S. Presidents, most recently that of Calvin Coolidge, the 30th President (1923-29), who was commonly referred to as “Silent Cal” because of his tendencies to be tight-lipped.

Pointing to the boldness of the Apostles Peter and John, who preached Jesus without compromise in Acts 4:1-22, Allen said believers today also must “be speaking,” and he pointed out a cycle which results when that is done: “Power by the Holy Spirit leads to proclamation of the Gospel of Christ and that leads to persecution. And that’s a cycle that we see repeated all throughout the Book of Acts.” 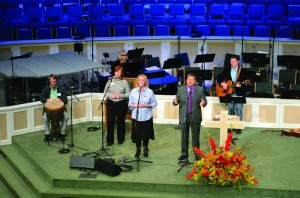 Randy Lind, BGCO worship and music specialist, second from right, and a praise team lead a time of worship.

He pointed out four major movements in Chapter 4. One, the opposition they faced was similar to that Jesus faced—priests, elders, rulers, scribes and pharisees. Two, the message they spoke. Three, the power they knew. Four, the boldness they demonstrated.

“I remind you this morning we are facing a great collision of world views,” Allen said. “Perhaps what God may use to get the church to speak up is an overreaching governmental arm telling us to shut up. If that’s what it takes, then let Him do it.”

BGCO Executive Director-Treasurer Anthony L. Jordan in his address to close out the Tuesday morning session, bemoaned the fact that the “sexual revolution of the sixties has produced for us what we live in today . . . . we are in a moral decline that is unprecedented in America. For nearly 180 years, America was, if you will, overshadowed by the Christian worldview.

“But in the 1960s, we began this moral decline that is now hitting the bottom. And, it is in that kind of world that Christ has called us to do His ministry. It is more difficult today than we have ever seen in America.

“It runs in many different directions. But just 10 years ago, we fought the battle against the lottery, and today, there are more than 115 casinos in Oklahoma. The green-eyed monster of greed ravages our state.” 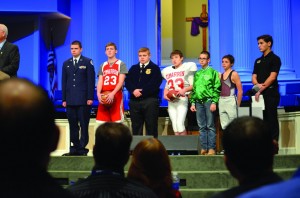 Young men from Boys Ranch Town introduced themselves during the Oklahoma Baptist Homes for Children presentation.

But, Jordan said what goes on in America today is not a unique setting for the Gospel. He pointed out what the Apostle Paul faced when taking the Gospel to the City of Corinth—one of the most sinful places on Earth—in the First Century.

“Paul was facing a city of debauchery and decadence,” Jordan said. “And, the world has not changed. The world has always been dark. This is the mission field, and we serve a mighty God who has a powerful Gospel.”

Jordan urged those present to remember that those who do not know Christ are not their enemies, and that believers “must show them the unconditional love of Jesus Christ.”

Jeremy Freeman gave the annual sermon, concluding the Annual Meeting. The pastor of Newcastle, First spoke from I Timothy on Guarding the Glorious Gospel, giving three points the church must do: 1. Keep defending the Gospel; 2. Keep clearly defining the Gospel; 3. Keep declaring the Gospel.

“If the church loses the Gospel, in any form, it’s lost everything,” said Freeman.