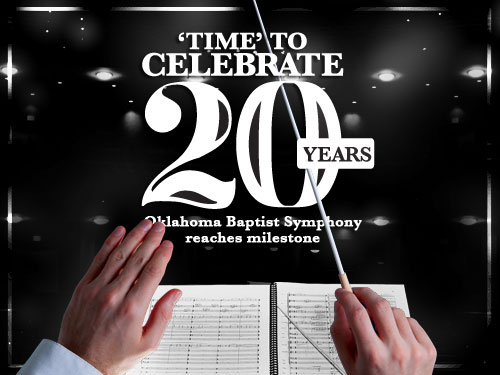 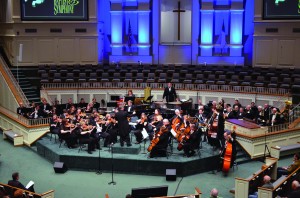 As the final note of “Majesty” rang through the worship center at Oklahoma City, Southern Hills the evening of May 4, a throng of more than 350 worshippers rose to their feet in appreciation of the conclusion of the 20th Anniversary Celebration Concert of the Oklahoma Baptist Symphony (OBS).

The event marked the passage of “time” over two decades which has included hundreds of hours of rehearsal, thousands of miles of travel and countless prayers by and for the only state convention full symphony existing in the Southern Baptist Convention.

The celebration, which featured a specially-commissioned arrangement of the hymn, “Amazing Grace,” by Dan Goeller, also brought back three former conductors of the group to hoist the baton once again and paid tribute to  six late members.

Trumpeter Preston Collins, one of nine charter members of the orchestra, served as narrator for the evening, which included baroque, classical, romantic and modern pieces. He referenced “time” in his narration throughout the evening, using Scriptural references from 2 Peter, Ecclesiastes, Revelation and the Gospel of John.

“As we contemplate our anniversary, God’s use of time is an important theme to consider,” Collins stressed.

As to Goeller’s arrangement, Collins said, “It is clear that God has bestowed His grace on this organization and the people in it time and again . . . . The members of the ensemble wish to offer this performance as a prayer that God will continue to bless our efforts to share His love, His peace and His grace with all who hear our music for the next 20 years and beyond.” 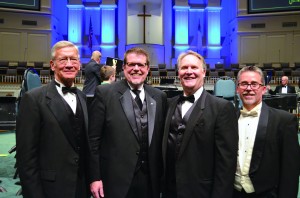 Past and present conductors of the Oklahoma Baptist Symphony, from left, include Bill Green, Ken Gabrielse, Keith Haygood and Mike Raiber. Not present was Jon Duncan. (Photo: Bob Nigh)

Percussionist Jana VanderTook, a member of the 65-member group for 18 years, has served as its president this year.

Prior to the concert, she reflected on its significance and her opportunity to serve as OBS president.

“It’s an incredible honor. It is so exciting to be able to help plan everything that has led up to this weekend,” she said. “We have enjoyed seeing former members and conductors today, celebrating 20 years of incredible ministry and the grace of God that has followed this group for 20 years.”

“The people stories are what I remember,” she reflected. “We have had members who have gone through traumatic events, and we have been there to pray for them and lift them up, and it’s such a joy to see them tonight. But, also the little moments. Those musical moments where you know that the Spirit was in a place to such a degree, and your music helped lead people there.”

Former OBS conductors present included Bill Green, retired senior associate executive director of the Baptist general Convention of Oklahoma; Keith Haygood, associate pastor/minister of music at Edmond, First and Ken Gabrielse, dean of the Warren M. Angell College of Fine Arts at Oklahoma Baptist University. Unable to be present was the OBS’ first conductor, Jon Duncan, music and worship specialist for the Georgia Baptist Convention, who was expected to attend but was unable to do so at the last minute and delivered comments via a video.

Green and Duncan had the vision for the OBS two decades ago.

“I have to say that Oklahoma is very blessed to have so many wonderful musicians. The Oklahoma Baptist Symphony is still one of the most unique organizations in all of Southern Baptist life,” Green said. “In fact, still, the OBS is the only full symphony of any state convention in the Southern Baptist Convention. So, they have had a lot of wonderful years and continue to serve the local church and the constituency in the organization are all active in their Southern Baptist churches and great musicians, but great Christians. 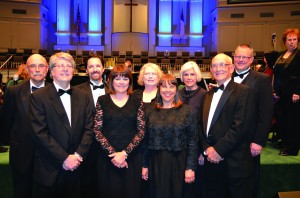 “It just blesses my life to be able to stand before them again. They have always been so precious to my wife and I. Of course, Linda is still playing. She was one of the charter members, so she has enjoyed her role all of these 20 years. But, to  come back and be able to lead them for a brief time tonight is a very delightful blessing for me.”

Green, recently honored along with his wife with the choir loft at the Falls Creek tabernacle being named in their honor, recounted how the OBS began.

“My heart, when I came here to lead the church music department, was to start an orchestra. After a year, Jon and I discussed it and we started the auditions and it began from there. That’s what has been such a thrill, to have that vision and  then to see it come to fruition. It has totally exceeded our expectations.

“But, the people were hungry. There were so many of the musicians who had not had an opportunity to play after college or high school or graduate school automatically had an opportunity to use their talents for the Lord, especially those in the smaller churches who didn’t instrumental programs and never were able to use their talents. So, this has been a great blessing and I think nationally it has gone beyond our wildest dreams.

Current conductor Michael Raiber, also director of the Worship Orchestra at Norman, First and associate professor of music education at the University of Oklahoma, said he counts directing the group as an honor

“I’m following in the footsteps of such great men. Not just great musicians, but great men who provided such an incredible mission that seemed so unlikely. Once a month, (we) drive hundreds of miles to put together an orchestral concert for people who just love to come and worship and celebrate the Lord. It is a dream that is just amazing to live.”

Earlier in the day May 4, OBS members, their families and the former conductors attended a banquet luncheon in their honor.