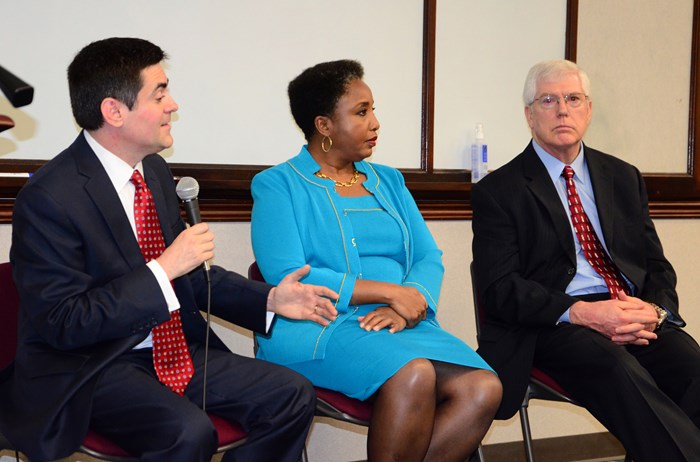 ERLC President Russell D. Moore, left, speaks during a question and answer session at the Institute of Faith and the Public Square’s “Challenges to Religious Library” conference as Carol Swain of Vanderbilt University and Mathew Staver of Liberty Counsel and Liberty University School of Law look on. Photo by Marilyn Stewart/NOBTS

NEW ORLEANS (BP) — Christians must hold fast to both conviction and kindness as they share the Gospel in a culture that is increasingly supportive of same-sex marriage, Russell D. Moore said during a luncheon at New Orleans Baptist Theological Seminary on the church, homosexuality and same-sex marriage.

Moore, president of the Southern Baptist Convention’s Ethics & Religious Liberty Commission, spoke for a trio of events at the seminary Sept. 30. He was the featured speaker in Leavell Chapel that morning, and he was one of three panelists who considered “Challenges to Religious Liberty” that evening as part of the Institute for Faith and the Public Square’s annual symposium.

Scheduled between those two events was the luncheon on homosexuality, sponsored by the seminary’s division of theological and historical studies.

When he taught seminary courses, Moore often presented a hypothetical scenario to his students as part of a final exam, he said at the luncheon. In the scenario, a woman named Joan expresses a desire to accept Christ and become part of the church. However, she says she is not sure what repentance means for her. She goes on to explain she was born as John, had gender reassignment surgery 20 years ago and now has an adopted child who knows her only as mother.

Moore said students would challenge his scenario, saying it was unrealistic. Moore begged to differ.

Today many congregations have “to deal with the question of Joan,” he said. In some cases, “if you’re not dealing with a situation like that, it is only because you are not taking the Gospel to everybody in your community.”

As courts are moving to legalize same-sex marriage, “so is the culture,” Moore said. “If you look around and see what’s happening demographically, fewer and fewer persons are objecting to same-sex marriage. And even those who do are framing it in more libertarian terms: ‘Whatever is happening with my neighbors is no problem of mine.'”

Moore said one challenge facing pastors is knowing how to minister amid the new atmosphere of sexual license. He said a good first step for pastors is to “articulate a theology of marriage.”

“One of the problems I think we have is that for a long time we have assumed most people in America are just like we are when it comes to issues of ‘principles’ and ‘values,'” Moore said. “We assume that most people already have an understanding of marriage, an ideal of marriage, even if they don’t live up to it.”

But that’s not the case, Moore said. Christians must define what they mean by “marriage” and why that definition is significant in relation to the Gospel.

“When you evacuate marriage, you are evacuating more than just the common good — although you are doing that — you’re also evacuating the content of the Gospel. This has Gospel implications for us,” he said.

Another aspect of ministry in a sexually tolerant culture is defining what it means to follow Christ, Moore said. Too often the Gospel is misunderstood to say that a follower of Christ must be “married [with] 2.3 children.”

“There is a mindset outside the church and too often within the church that there is a certain sort of person who is likely to be Christian, and unless you fit into that cultural mode, you are not offered the Gospel,” Moore said. “That [mindset] has got to be destroyed because that is contrary to the Gospel itself.

“Married, 2.3 children is not the Gospel of Jesus Christ,” he added. “You have to be able to articulate to people what it means to take up a cross and to follow Christ, which means the denial of self, including the denial of sexual appetites, in a way in which the entire body is ministering to that person. That means explicitly talking about those things from the pulpit.”

Moore said communicating the Gospel requires both conviction and kindness, traits exemplified in Jesus’ encounter with the Samaritan woman at the well in John 4.

“Jesus always exposed sin, but you will notice Jesus is never shocked by sin,” he said.

In John 4, Jesus did not dismiss the woman because of her sexual sins, Moore noted. Instead He said, “Go call your husband and come back here.”

“Jesus does not wring His hands and step back and say, ‘Can you believe this lady? Five husbands?’ No, He’s not shocked by sin and neither should you be,” Moore said.

In addition to evangelizing same-sex attracted persons, Moore said pastors should be prepared to minister to parents who have children dealing with this issue.

At the conference on religious liberty, Moore said Christians should defend religious liberty for all people, not just for themselves. In doing so, believers help ensure that the church can accomplish its mission without government intrusion.

“Challenges to Religious Liberty” was sponsored by New Orleans Seminary’s Institute for Faith and the Public Square. Mathew Staver, chairman of Liberty Counsel and dean of the Liberty University School of Law, and Carol Swain, professor of law and political science at Vanderbilt University, joined Moore in speaking about issues affecting religious liberty.

Staver discussed California and New Jersey laws which forbid state licensed counselors from helping clients under 18 overcome same-sex attraction. Swain spoke about Christian student groups at Vanderbilt University that have been decertified because they restrict leadership positions only to active Christians.

Churches must articulate a concept of religious liberty that goes beyond self-interest and self-protection, Moore said.

Moore noted that early American Baptist John Leland promoted religious liberty for all faith groups. Leland did not do this because he affirmed every faith, but because he accepted the biblical doctrine of salvation through Jesus Christ and understood that a coerced faith is no faith at all.

“We must fight for religious liberty for all people, because if we have the sort of society where consciences can be paved over by state action, that not only treats human persons as things and objects, that is a danger and a repudiation to the Gospel,” Moore said.

Moore also addressed the separation of church and state, an idea that has been reshaped by post-Christian culture but should be reclaimed by Christians, he said.

“God has given a calling to the church to go forward with the Word of God in persuasion and with conviction, but God has not given to the church the coercive power of the sword,” Moore said. “We seek to see to it that the church is able to advance her mission free from government supervision. Because of that, we believe that every gathering of religious people is able to pursue their beliefs without government supervision and oversight.”

Lloyd Harsch, director of the Institute for Faith and the Public Square said, “It was exciting to see a diverse group in attendance” at the conference, “including local pastors, seminary students and members from the New Orleans Secular Humanist Society.”

Planning is underway for the next Institute for Faith and the Public Square event, “Baptist Voices on Religious Liberty,” set for Sept. 29, 2015 at New Orleans Seminary. The conference will explore Baptist views on religious liberty from a variety of perspectives around the world. Featured speakers for the event have not been announced.