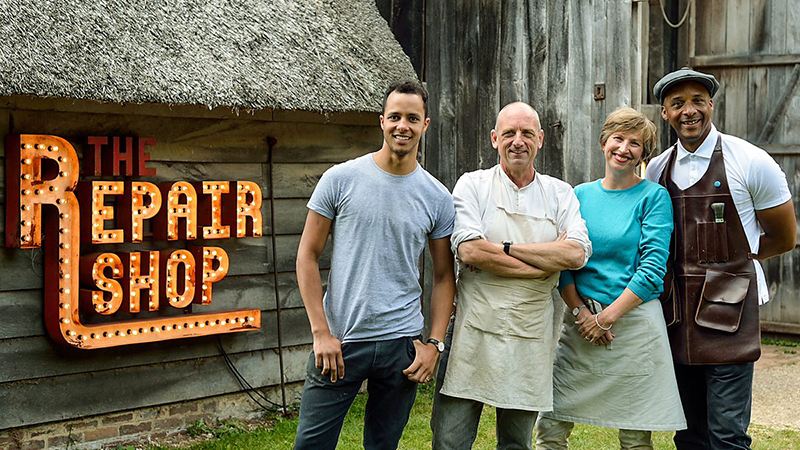 Long ago, our grandparents and great-grandparents didn’t toss things when they broke. They repaired them.

From clothing to furniture to gadgets, our ancestors knew what to do when something got damaged or stopped working.

The repair culture has been replaced by the throwaway culture. We no longer fix stuff. We throw it in the dumpster—and then we log onto Amazon to find the replacement.

A new BBC reality program might help us change our mindset.

Appropriately named The Repair Shop (TV-PG) and now streaming on Netflix, the series follows expert craftspeople as they restore family heirlooms. It stars furniture restorer Jay Blades but includes other experts who work in the same picturesque English shop, including specialists on carpentry, metal, leather and ceramics.

The Repair Shop is one of my family’s new favorite shows, and it leads this month’s list of “5 Family-Friendly Things.”

In one episode, the experts restore an old jukebox, transforming it from a non-working hunk of junk into a shiny music box straight out of the 1950s. In another episode, they restore a century-old piano bench and an old-fashioned telephone.

Netflix is home to the first two seasons of The Repair Shop and more than 30 episodes.

It’s entertaining and nostalgic, yes, but it’s also a reminder of the joy that can be discovered in fixing things. Perhaps that’s because we serve a God who restores—and because we’re made in His image.

“Nowadays things are not made to last, so we’ve become part of this throwaway culture,” Blades said, explaining that the series is “all about preserving and restoring.”

Of course, repairing things has another benefit: Saving money, learning a new skill and not needlessly filling landfills.

‘The Inbestigators’ (Netflix)—Four Australian tween-aged kids conduct investigations into day-to-day mysteries, such as missing money in a piggy bank and even a missing girl at school. They always solve the case, and they always have a blast along the way. The Inbestigators is a comical kid-friendly “crime” mocumentary free of the nonsense found in many modern children’s series. (And mostly free of the name-calling, too.) The first two seasons are now on Netflix. Rated G.

‘Adventure Force 5’ (Vudu)—If you haven’t discovered Vudu’s free family-friendly content, then now is a good time to start. Adventure Force 5 is an original free movie on the Vudu streaming platform that follows the story of five teens after their parents—and the other adults in town—disappear. Adventure Force 5 borders on corny at times, but my 11-year-old son loved it. It may be too scary for small children, though. And if you don’t like it, then check out Vudu’s collection of hundreds of filtered mainstream movies. It contains no coarse language or sexuality. Rated TV-PG.

‘Inexplicable: How Christianity Spread to the Ends of the Earth’ (TBN)—It’s a six-part original TBN documentary that charts the spread of the Gospel—from its origins in Judea to every continent on the planet. It features interviews with historians and is hosted by actor Dennis Haysbert (Breakthrough, 24). It’s educational and well-done. Stream it free at TheStateofFaith.com.

‘Chitty Chitty Bang Bang’ (Netflix)—An eccentric inventor and widower takes his children (and a wealthy woman) on a ride in his flying car. It’s a 1968 musical comedy that starred Dick Van Dyke and received Oscar and Golden Globe nominations. It’s not as popular (or as entertaining) as Van Dyke’s more well-known musicals, but it’s still worth a watch. Some content might frighten sensitive children. Rated G.