The Lincoln Bicentennial: A Time for Remembrance 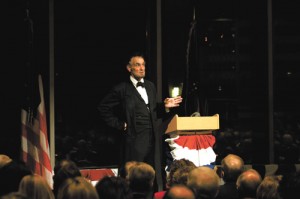 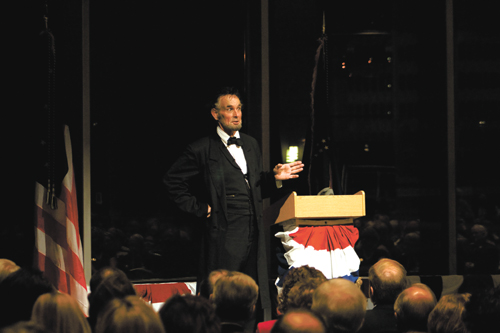 Presidential historian Richard Norton Smith believes all modern American presidents eventually bond with Abraham Lincoln. His legacy casts a long shadow across the American Presidency and lingers in the mind of every Oval Office occupant when encountering unpopular decisions and especially war. If the hundreds gathered at the Oklahoma History Center on the 146th anniversary of the Gettysburg Address is any indication of Lincoln’s attraction across time, the American people possess an undying interest in him as well.

America’s 16th president also retains the fascination of both historians and theologians alike as Lincoln, unlike other presidents before or since, invoked the name of God in his presidential speeches and public correspondence in ways which still cause confusion among many as to whether he had truly been converted to Christianity.

Some of those who gathered to hear Fritz Klein, the actor from the Lincoln Institute for Education, were surprised at the way he portrayed Lincoln. Most who gathered at the history center supposed Lincoln stood erect behind a podium as he delivered his speeches with a deep resonant voice. Quite the contrary. Klein played the role perfectly.

Lincoln had a rather high-pitched voice and animated his speeches with his head. It was said he was always “throwing or jerking or moving it now here and now there, now in this position and now in that, in order to be more emphatic, to drive the idea home.” Those who heard Lincoln speak never forgot it. The Bloomington (Illinois) Pantagraph reported on Sept. 3, 1858 their impression of Lincoln’s persuasive powers: “How any reasonable man can hear one of Mr. Lincoln’s speeches without being converted to Republicanism, is something that we can’t account for.”

His powers of persuasion combined with his unusual ability to write made Lincoln almost an unstoppable force in matters of state as he presided over an era in American life where the entire idea of a free republic often looked as if it would break apart. For all who have studied his life and work for any length of time, Lincoln remains a fascinating and complex subject. Even Lincoln detractors such as historian Richard Hofstadter, who declared him to be “thoroughly and completely the politician” rather than the statesman who rose above the partisanship inherent in the rough and tumble world of politics, admit that he was a man who possessed incredible abilities to speak the right words at the right time.

From Springfield to Washington, D.C.
On Monday, Feb. 11, 1861, Lincoln arrived at the train station ready to embark on the journey that would take him to the nation’s capital. He had informed the press that there would be no public statement on the occasion of his departure, but the assembled crowd urged him to offer remarks on this historic occasion. An emotional Lincoln stated that he would leave Springfield (the town where he had lived for almost 24 years) with a task that was “greater than that which rested upon (George) Washington.”
Lincoln concluded his remarks:

“Without the assistance of that Divine Being, who ever attended him, I cannot succeed. With that assistance I cannot fail. Trusting in Him, who can go with me, and remain with you and be everywhere for good, let us confidently hope that all will yet be well. To His care commending you, as I hope in your prayers you will commend me.”

Ronald C. White, Jr., author of the magisterial new biography of Lincoln writes, “the God that Lincoln invoked was more than the creative first force cited by Jefferson.” Lincoln appealed to a God active in history and—in what he termed throughout his term in office—providence. This was a doctrinal category that was learned from his earliest years in the Separate Baptist congregation that he attended with his family.

God, as Creator, was best understood as upholding all things by the word of His power (Heb. 1:3) and in His infinite power and wisdom upholding and directing all creatures and things to the praise of His own glory. Such teaching would have been common to the young Lincoln. Yet, as his theological thought developed, Lincoln came to understand a different meaning from the classical doctrine of God’s providence. Allen Guelzo, Lincoln scholar at Gettysburg College, has written that Lincoln’s view of providence involved a careful balancing out of an abiding respect for “a divine purpose in human affairs with the candid recognition that it was surpassingly difficult to know what purposes God might have.”

Greatly influenced by John Bunyan’s Pilgrim’s Progress (first published in 1678 and remained an inescapable book for many people during this era in American life), Lincoln viewed himself as a player in a grand story that involved the tragedy and heroism of life on Earth leading ultimately to a mysterious place that was out of this present world.

During the days leading up to the defining tragedy of the American nation—the Civil War—Lincoln saw the preservation of the Union as his ultimate concern and greatest obligation as president. The issue of slavery loomed before him, but he worked to bring resolution to the potential conflict by decrying the institution of slavery as a moral evil all the while hoping that a certain gradualism could be introduced into the legislative process that would eliminate slavery over time.

Already on record as opposed to the 1857 Dred Scott decision which ruled that slaves had no rights that white men were required to respect, Lincoln stated that the ruling by the Supreme Court had blown out “the moral lights” on slavery. In response to his chief opponent, Stephen A. Douglas, Lincoln stated that the real issue in the controversy was whether slavery should be treated as a “moral, social and political wrong” or as an institution which should remain “perpetual and national.”

For Lincoln, the issue was obvious. While there were certain political calculations that were taken into account regarding his position, he did not view the American public as the defining variable in his belief. He insisted that the Declaration of Independence be the interpretive tool of the US Constitution—a belief that remains controversial in matters of political philosophy.

These Hallowed Grounds
By the time Lincoln arrived in Gettysburg, Pa., the stench of death that had dominated the town for months had finally begun to go away. On Nov. 19, 1863, the hero of the hour was Edward Everett, a former U.S. Senator, U.S. Representative, Governor of Massachusetts and President of Harvard University. He spoke for two hours and was hailed by the newspapers of the day as the defining voice in the horrific conflict between the North and South.

After Lincoln gave his brief address, few even realized the president was speaking until after he sat down. Many newspapers did not even report the President’s remarks. Yet the dominance of the address remains central to what Lincoln referenced as “a new birth of freedom.” Theologians have analyzed the speech hoping to finally discover the formal doctrine of Lincoln’s theology.

If the Gettysburg Address serves as any indication of Lincoln’s relationship to Christianity, he did not fully embrace the cardinal doctrines of the Christian faith.

While the cadences and content of the address have certain biblical undertones, there is no mention of direct intervention of God or explicit reference to divine revelation (i.e. Holy Scripture) anywhere in the brief address.

Who is on the Lord’s Side?
The Civil War brought about much theological reflection. Theologians from both the North and the South were confident that God’s purposes in the events of the war could be easily detected. Each victory and loss was seen as a clear blessing and/or curse from Almighty God. It was this American president (not theologian) who offered the most substantial theological thoughts regarding the War. Abraham Lincoln, a man who would rarely be seen in any church (although he did attend New York Avenue Presbyterian Church in Washington, D.C. from time to time) demonstrated a departure from the pack of American theologians that continues to puzzle many pastors and religious historians.

A little more than a month before his death, Lincoln gave his most comprehensive understanding of God. His simple logic has astounded many who have studied its theological and biblical implications. While both sides in the conflict prayed to the “same God” and read the “same Bible,” both could not be assured of the blessing of Almighty as accomplishing His purposes in the war. Attributing to God’s sovereign providence alone divine purposes which may or may not be realized in the immediate future, Lincoln confirmed that he possessed a theological worldview that, in many ways, brought a clarity to the war that the most respected pastors could not attain. Historian Mark Noll in his work, America’s God, writes, “none of America’s respected religious leaders mustered the theological power so economically expressed in Lincoln’s Second Inaugural.” Noll believes that no public official has “penetrated as deeply into the nature of providence” as did Lincoln on March 4, 1865.

The Redeemer President
When Lincoln walked into Richmond, Va. one month later, former slaves kneeled before him. “Don’t kneel to me,” Lincoln said. “That is not right. You must kneel to God only, and thank Him.”

Whether or not Lincoln ever was or became a Christian will continue to be debated among theologians and historians. Yet Lincoln did heal what American political historian John Diggins refers to as the “Machiavellian wound” in American political life. Three centuries before Lincoln, the founder of political science, Niccolo Machiavelli, worked to separate politics and morality. Machiavelli had successfully worked to separate religion from politics in such a way that any reference to the Bible or God or any such idea that did not come from human or secular sources was out of bounds for political discussion.

Lincoln defied and reversed such a political worldview. He insisted that moral questions were not to be regarded as mere political calculations, but matters of morality where the potential of mob rule and direct democracy should not enable unjust laws. In the words of political philosopher and ethicist, Jean Bethke Elshtain, Lincoln’s Second Inaugural Address “offers words that are, at the same time, benediction, his own epitaph, and a continuing inspiration to a more worthy politics.”

As the church continues to search for the proper response to political issues and public policy, the celebration of the Lincoln bicentennial reminds the American nation that statecraft is, and will forever remain, soulcraft.