The Incarnation: Why Does it Matter?

As we celebrate Christmas, we focus on one of the most important Christian doctrines—the incarnation. Jesus was “Emanuel,” “God with us” (Matt. 1:23). So why does the incarnation really matter so much?

(1) The incarnation matters because it reminds us that the body is not evil. God created the physical world, including the human body, and He described it as “good” (Gen. 1:4, 10, 12, 18, 21, 25, 31). The Bible’s affirmation that the body is not inherently evil is underscored powerfully in the incarnation when the Word (Jesus) “became flesh and dwelt among us” (John 1:14).

(2) The incarnation matters because it allows Jesus to identify with and understand us. Jesus was born into the same sort of earthly circumstances in which we find ourselves—“born of a woman, born under the law” (Gal. 4:4, HCSB). Jesus experienced the challenges of growing up (Luke 2:42) and of being tempted (Matt. 4:1-11, Heb. 4:15). He knows what it means to be hungry (Matt. 4:2, 21:18; Mark 11:13; Luke 4:2) and thirsty (John 4:7, 19:28). In fact, since He lived in the First Century, in which there were no modern conveniences, His life was probably much harder than ours. Therefore, Jesus understands and can “sympathize with our weaknesses” (Heb. 4:15, HCSB).

(3) The incarnation matters because it makes Jesus the perfect Mediator for our prayers. Jesus is our Great High Priest (Heb. 4:14), and He has the supreme advantage of knowing exactly what we’re going through. He’s been there. Jesus was “tempted in all things as we are, yet without sin” (Heb. 4:15). Sometimes in the midst of a crisis, someone may tell you that they know how we feel, but in truth it is difficult for them to feel exactly like you feel until they have “walked a mile in your shoes.” Jesus took on human flesh and walked in our shoes. So, when we pray, we have a uniquely qualified Great High Priest Who truly knows what human struggles are like. Therefore, we can have confidence to pray in His name.

(4) The incarnation matters because it makes possible the forgiveness of our sins. The remission of sin requires a sacrifice of blood (Heb. 9:22). Blood comes only from real flesh and blood creatures. If Jesus were only divine, or like an angel, He would not be flesh and blood. Only because He took on human flesh could He be the sacrifice to atone for our sins (Matt. 26:28, Acts 2:38). An early church father, Gregory of Nazianzus, said, “That which was not assumed is not healed.” By that, he meant that had Jesus not taken on (assumed) human flesh, our sins would not be forgiven (healed). Because Jesus did take on human flesh, lived a sinless life (Heb. 4:15) and offered His sinless life on the cross of Calvary, He can provide forgiveness, atonement, salvation and eternal life for us (Rom. 5:1-21).

(5) The incarnation matters because it makes our resurrection possible. The Bible teaches not just the immortality of the soul, but even more importantly, the bodily resurrection. The Greek philosophers on Mars Hill in Athens already believed in the immortality of the soul, but when the Apostle Paul proclaimed the resurrection, they began to mock him (Acts 17:18-20, 30-34). Paul made it very clear in 1 Corinthians 15 that the resurrection of Jesus is the most important of Christian doctrines. If Jesus were not truly raised from the dead, Paul said, we are still in our sins, our faith is in vain and our preaching is in vain (1 Cor. 15:14-15, 17-18). In fact, however, Jesus became the first fruit of those who are resurrected, and thus we can have confidence in the forgiveness of our sins and in our own resurrections (1 Cor. 15:20).

These crucial doctrines associated with the incarnation reveal why one of the most dangerous heresies confronting the early church was Gnosticism. The Gnostics denied the incarnation—that Jesus was truly a human being. The Apostle John wrote those inspired words that in Jesus “the Word became flesh” (John 1:14), verified by the fact that the eyewitnesses of Jesus had heard, seen and touched Him (1 John 1:1-3). John even went so far as to assert that these heretical Gnostics were false prophets in the spirit of the antichrist when they denied that Jesus had “come in the flesh” (1 John 4:1-3). We must challenge those today who deny Jesus’ humanity just as the early church challenged the false prophets who denied the incarnation in their day.

So, for all these reasons, we celebrate at Christmas not just that Jesus came as the baby of Bethlehem, but that He was God in fleshly form. The incarnation really matters! 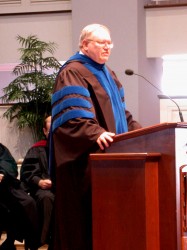 Provost, professor of philosophy and ethics and McFarland chair of theology at New Orleans Seminary

View all posts by Steve Lemke