“‘The Few’ is an original comic series that is designed to be more than that. It is designed to be a resource that churches and students can use as a creative next-level way to share the Gospel and open up spiritual Gospel conversations with their friends,” said Todd Sanders, student education specialist at the Baptist General Convention of Oklahoma (BGCO).

The comic series, which debuted at the beginning of summer youth weeks, follows a group of teenagers and young adults who are caught up in an unlikely adventure to reveal a hidden secret.

“As the story develops in the first three issues they begin to discover what the alliance is hiding. That decision will not only cost them at some level, but will also pull them 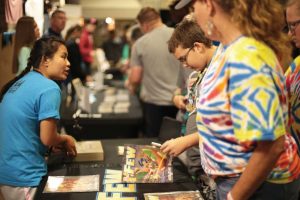 Students are able to purchase ‘The Few’ in Downing Lobby at the R.A. Young Tabernacle at Falls Creek or the 1917 Café and Gift Shop.

further into their search,” Sanders said.

Students, sponsors and visitors to Falls Creek have embraced “The Few” with open arms as it came into circulation on camp grounds.

“The reception here on grounds has been really positive. And not just typical comic book people. We have had adults, students and children alike that have purchased the comics. Some even to read it, these are like the true comic book collectors, the types that buy a set to read and one to just keep in the plastic,” Sanders said.

Sanders hopes the comic books, which were created through the Oklahoma State Mission Offering, will be more than a fun story, but a tool for students to engage in Gospel conversations.

“This form is a powerful way of communicating that not a lot of people are exposed to. It allows us to speak in a way that we haven’t always been able to, or in a new way, a fresh way to pin up people to the truths of the Gospel through this very narrative approach, this visual storytelling approach,“ Sanders said.

At the end of the summer “The Few” series will be available for purchase online at www.thefewcomic.com with an option for a small group discount.

“We have already had people inquiring from overseas, and people who follow our illustrator’s art,” Sanders said about the interest of people getting a copy of ‘The Few’ in their hands.

“The Few” illustrator, Dennis Jones, is a well-known artist who has used his skill to illustrate several biblical narratives.

“Working on ‘The Few’ has been a uniquely fulfilling experience. Every day is a new adventure as I work on developing and illustrating the various characters and scenarios,” Jones said.

The potential outreach through the comic has also been a unique experience for Jones.

“What really makes this project stand out for me is the potential these graphic novels have to those who might otherwise not take an interest in reading Christian literature. 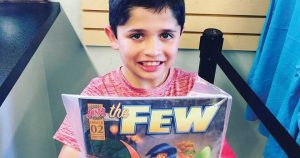 Cross Young proudly holds up his new copies of ‘The Few’.

The appeal of the story and the format are a great vehicle to draw the reader into significant truth,” Jones said.

Fans of “The Few” series, Cross and Annslee Young, children of Ryan Young, founder of The 516 Movement, said about the comic book, “I think that the characters are cool and they are really awesome. ‘The Few’ is my favorite comic ever! My sister has been reading them to me and I like the third comic book the best, ‘Shots in the Dark’,” Cross said.

Cross’ older sister, Annslee, enjoyed the comics so much she had a hard time reading just one.

“What I liked about ‘The Few’ comics the best is that when you read one you instantly want to read the next one. I read them, and I can’t put them down. ‘The Few’ comics are definitely my favorite comics ever,” Anslee said.

Ryan Young, Cross and Anslee’s father, enjoys that his kids have bonded over this comic book.

“I love that its a positive resource for them to read. We are thankful for these comics. I look forward to reading them as well,” Ryan said. 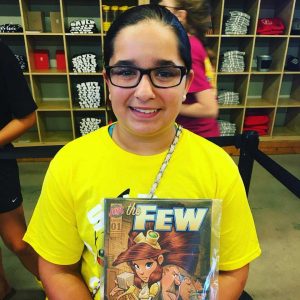 Annslee Young holds up her copies of ‘The Few’.

“It has allowed us to have some fun conversations and already to see it click with some that are geared to this interest and this medium,” Sanders said.

“That, with the added layer of the resources, I’m really excited to see how this will benefit the church in our state and even beyond.”

“The Few” is available for purchase following each evening service at Falls Creek throughout the summer, as well as in the new book store located on Centennial Plaza. 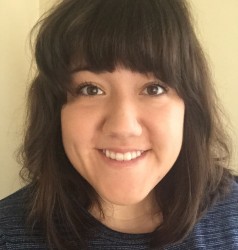