‘The Applause of Heaven’ 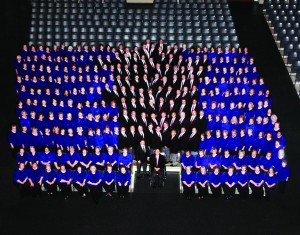 DAVIS—Well-known composer Phil Barfoot wrote the song, “The Applause of Heaven,” following the death of his father, Milton, a few years ago, but put the manuscript away before deciding to publish it.

Now, the Singing Churchmen (SCM) and Singing ChurchWomen (SCW) of Oklahoma will bring it to life Thurs., Nov. 7 during a 7 p.m. concert at Falls Creek Baptist Conference Center (FCBCC).

The concert—which features about 350 singers and instrumentalists—will be the first major use of the Bill & Linda Green Choir Loft in the R.A. Young Tabernacle since the loft was named in honor of the longtime Oklahoma music leader and his wife. Fittingly, the couple will be a part of the historic event themselves as members of the groups.

“Phil Barfoot has been involved in Christian ministry all of his life,” said Randy Lind, worship and music ministries specialist with the Baptist General Convention of Oklahoma (BGCO), and the groups’ director. “He has been a minister of music, but is now the owner of CCT, which is based in Nashville and produces recordings and music and provides travel opportunities worldwide for churches. In addition, Phil is a gifted song writer and conductor.”

Lind said Barfoot sent a rough draft of “The Applause of Heaven” to him and a SCM leadership team who were selecting songs for a new CD to be recorded by the Oklahoma groups.

“The song became the title cut because we felt it deserved to be,” Lind said.  “At the time, we had no idea of the history or story of the song. Phil only told me the story after I informed him it was going to be the title cut.

“Phil says the song honors his father’s close walk with the Lord and his life as a faithful servant and follower of Christ.  The words to the song include, ‘Well done! Yes, it will be worth it all, when they hear the applause of Heaven surrounded by the saints of all time. The heroes of the faith line the pathway to the throne, cheering them on as they hear the words they’ve waited for so long: Well done!’ Singing these words at Falls Creek and being able to remember the men and women who have served the Lord is a great privilege and honor.”

At the Nov. 7 concert, the SCM/SCW will officially debut the new 10-song CD, “The Applause of Heaven,” which will be offered to those in attendance for $10. The proceeds from the CD sales will help fund SCM and SCW projects.

“Another exciting part of this recording is that six of the songs will be released as octavos by LifeWay Worship in its America’s Best Praise and Worship Series for Choir and Congregation and made available to choirs and music ministries throughout the United States and worldwide,” Lind said. “Two of the songs are already available for purchase. Also, every member of the SCM and SCW at Falls Creek will receive a copy of the anthem and title cut of the CD, “The Applause of Heaven.”

Rounding out the play list on the CD are “O Happy Day,” “In Times Like These,” “Your Awesome Love for Me,” “The Majesty and Glory of Your Name,” “Mercy,” “Mighty God, Loving Savior” and “Open my Eyes.”

The Nov. 7 concert at Falls Creek is sponsored by the FCBCC and local area churches. While no guided tours of the conference center will be available that day, BGCO Conference Centers Director James Swain encourages attendees to come early and tour the facilities themselves.

“Finally, since this is the 40th anniversary of Oklahoma disaster relief, we encourage our disaster relief volunteers to wear their yellow shirts so they can be recognized during the concert for their selfless service to the Lord,” Lind concluded.