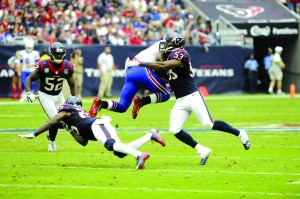 HOUSTON (BP)—When Bradie James stepped onto the field for the Houston Texans’ playoff matchup with New England Jan. 13, plenty of his teammates and opponents were playing for themselves.

James knew, because he used to be one of them.

A starting linebacker for the Texans, James eventually came to a crisis of faith as he began to question why he played football. He started going to church and trying to understand where he placed his faith. He picked up a Bible and started reading.

James shares his testimony in a video on the “I am Second” website. “I am Second” is a movement that tells the stories of actors, athletes, musicians, business leaders and others who have seen the Lord transform their lives.

The Bible verse that changed James’ life was Rom. 12:2.

“I’ll never forget it,” James said in the video. “That verse said, ‘Do not conform to the things of this world, but be transformed by the renewing of your mind.’ For some reason, something clicked. I have to renew my mind. If I renew my mind, then my actions will definitely follow.

“God has given me this talent, and if I do my best, and if He receives all the glory, that’s really what it’s about.”

James said his decision to follow Christ caused him to lose some friends when they started noticing that he wasn’t doing the things he used to do. But his conversion also has given him many opportunities to talk to teammates about the Lord.

“I’ve had a lot of guys ask me what’s going on with me,” James said. “I like it when they ask me that because it’s my chance to disciple or tell them the Good News. I give them food for thought and then help bring them back to their spirituality.”

Rather than playing for selfish reasons and trying to measure up to someone else’s expectations—which he acknowledged he’d never meet—James said he now plays for a bigger purpose and for God’s approval, no matter whether he wins or loses.

Unfortunately, the Texans lost to the Patriots, 41-28 in the AFC divisional round.

“We all have a story and we all have a platform,” he said. “It’s funny how God can take what we think is a mess and turn it into a message.”