Eight people were killed and about 200 were injured as tens of thousands protested to establish civilian rule, according to reports from the Associated Press and the New York Times, citing estimates from Sudan’s Ministry of Health and the Central Committee of Sudan Doctors. Seven were reportedly killed in Khartoum and one in Atbara, about 200 miles northeast of Khartoum. 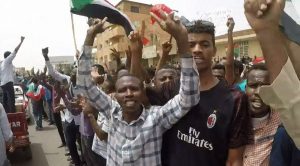 Christians comprising about three percent of Sudanese have not participated in protests officially, a religious watchdog group told Baptist Press, but individual Christians have been active in the protests that began in April.

“Christians are not really organizing and protesting as part of the Church as in a Christian function,” Nathan Johnson, International Christian Concern’s (ICC) regional manager for Africa, told BP today (July 1). “I do know some Christians are participating in the protests, but because the Christian church has been so beaten down and persecuted for so long there, it’s dangerous for them to stand up and do anything at this point in time.

“It would honestly be almost suicide for them to really come out as a church and say, ‘We have to fight the power,'” Johnson said, “because that would easily turn them into martyrs at this point in time.”

Christians there are praying for peace and safety, a Southern Baptist who witnessed earlier protests told BP today.

“They are fine,” the source said, requesting anonymity. “None are participating in the protests but are praying for peace and safety in the country so they can live in tranquility and spread the Gospel. They are using the turmoil to proclaim that ‘only Jesus can bring true peace to the hearts of men.'”

Christians in Sudan hope civilian rule will decrease religious persecution that intensified under the 30-year-rule of Omar al-Bashir, ousted in April. With al-Bashir gone, the Transitional Military Council (TMC) established power, and protesters led by the Sudanese Professionals’ Association (SPA) continue to rally for civilian rule.

The TMI is reportedly blamed for killing an estimated 128 protesters, and raping 70 women and three men June 3. Sunday’s protests followed failed negotiations for a transition to civilian rule. The TMI also hindered communication among civilians by blocking internet access in the country, but civilians organized Sunday’s demonstrations through word of mouth and bullhorns, the AP reported.

Government persecution of Christians is high in Sudan, where churches have been destroyed and pastors have been harassed, evicted from their homes and arrested. In some cases, Christians have resorted to living in caves and worshiping under trees, according to reports.

Muslims protesting for democracy are expected to treat Christians more favorably under civilian rule, even as Sharia law is expected to continue.

“We haven’t seen any indications that they would take away Sharia law or anything afterwards,” Johnson said of protesters. “Even if this group takes over, there’s no guarantees for the Christian community there in Sudan that Sharia would be taken away or that there would be freedom of religion. But there is a massive hope that they would at least suffer less under a democratically led government.”

There’s always hope for Christians in Sudan, Johnson told BP, despite discouragement and fear that increased after protesters were killed.

“You never know when someone may stand up and say something that will turn a culture around,” Johnson said. “We’ve seen it throughout history where a Christian leader or somebody will stand up and really be able to change the government’s heart. There’s always hope. They hopefully will not lose that, won’t lose their faith.

“God clearly wants the church in Sudan to thrive, wants them to stand up for their faith,” Johnson said. “And with these protests you never know; it may end up turning the government to a democratic society which is definitely a step forward from the more autocratic or dictatorship that has been around.”

Open Doors USA, in its 2019 World Watch List of Christian persecution, ranks Sudan as the sixth most difficult country for Christians.

“All Christian communities in Sudan are afraid of having conversations about their faith with Sudanese Muslims because that could put them at risk for arrest or intimidation,” Open Doors reported during al-Bashir’s rule. “The level of persecution that converts and ethnic Africans face is enormous. There have been arrests; many churches have been demolished with others on an official list awaiting demolition. In areas like the Nuba Mountains where there is an ongoing conflict between government forces and rebel groups, many Christians are attacked indiscriminately.”

EDITOR’S NOTE: This story has been updated since its original posting on July 1.