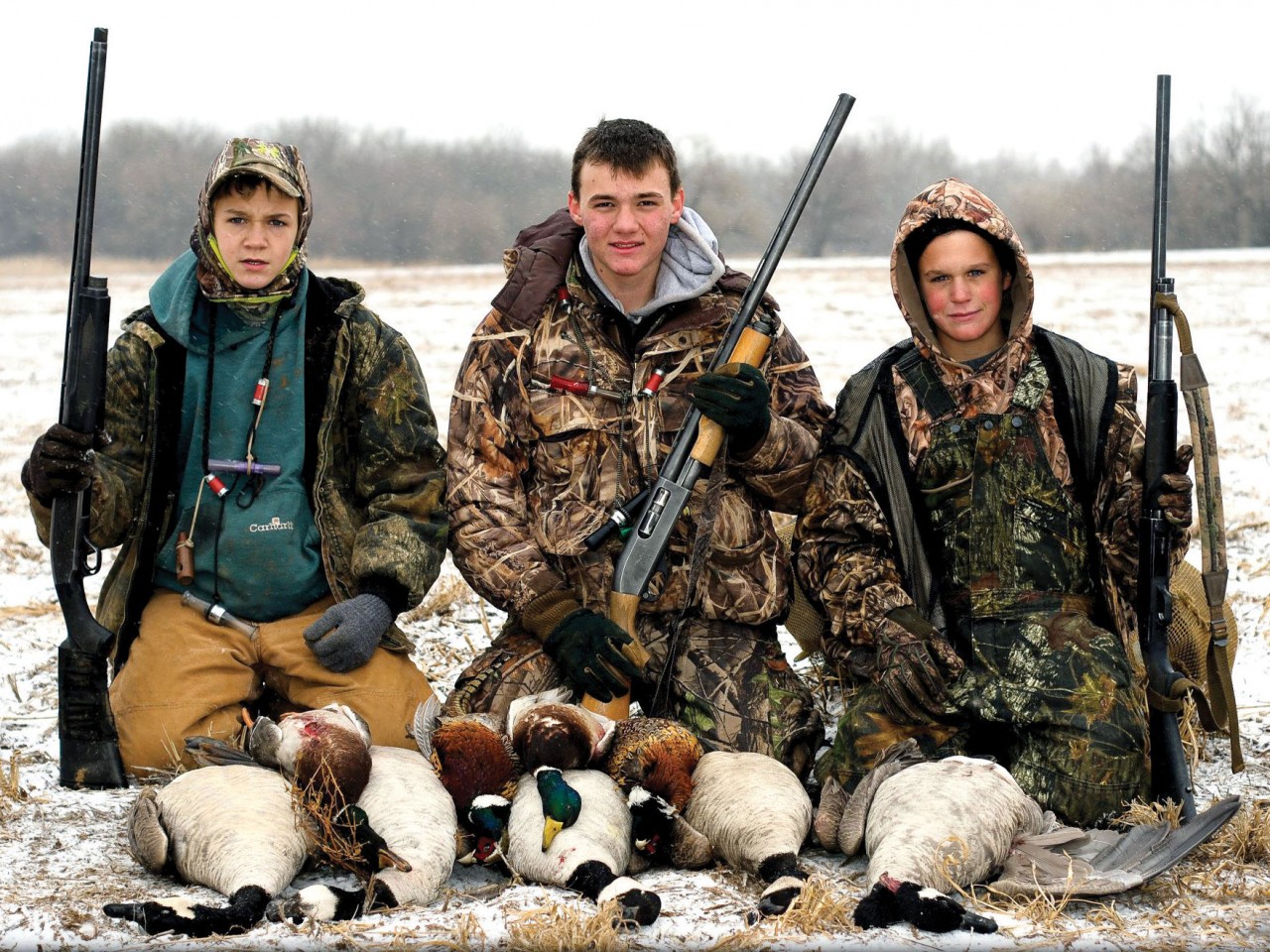 From left, Dakota Craig, Nick Spears and Dallas Craig share the results of their hunt. The young men participate in Team Blind Faith, a Christian discipleship program that is incorporated while they are hunting.

PONCA CITY—How does one apply Scripture memory to riding horses or duck hunting? A family in Ponca City has a way to do so and has been helping children and young people learn the Bible while also leading some to Christ.

Renee Spears, a member of Ponca City, Northeast, leads New Life Trails Ministry, which she helped start eight years ago. A Christian school teacher, Spears was concerned that students were not retaining knowledge about the Bible.

“We put together a Bible program,” said Spears, stating the program would cover a span of 11 years, from 3 year-olds to 8th grade. “We also have horses (at the family’s home), and in talking about the horses with the kids, they were so excited to come out, and it lit up the Bible study.”

Children would come ride the horses, and Spears would lead devotions and cover Bible verses they were memorizing. “It is a cumulative Bible memorization plan. We decided, since the kids loved the horse so much, to make each year a trail. That’s where we came up with the name ‘New Life Trails.’”

Spears said they once visited a nature center that featured trails with facts about trees and nature. This prompted the idea to have Bible verses on wooden signs featured on the trails the students would travel while riding the horses. 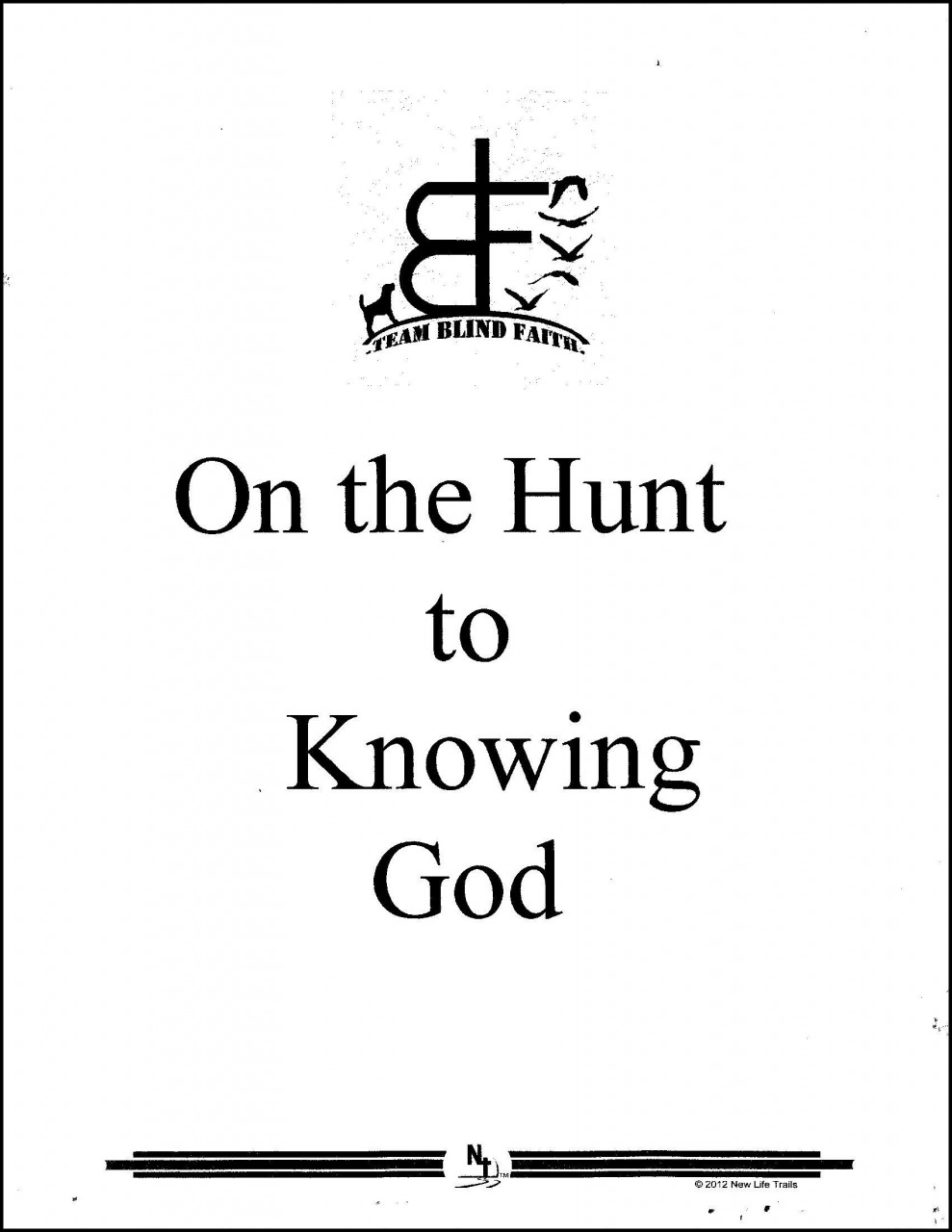 On the Hunt to Knowing God is the Bible study that Team Blind Faith uses while hunting.

The horses are a great draw for all children in her community. Spears said different ones come out when they see them riding the area trails and want to pet the horses and find out more about them, so Spears tells the kids about their ministry. Children come to ride and are willing and eager to learn the Bible while riding the trails. Throughout its eight years, New Life Trails has helped lead 11 children to Christ.

Since her son Nick has gotten older and, by his mother’s words, “outgrown” the horses, he and his friend Dakota have developed a discipleship program called “Team Blind Faith” that incorporates hunting.

“I asked them if they would like to take the Bible material and work with boys who don’t have that mentorship in their life,” said Spears. “They have the same passion in hunting that other kids have for the horses. It’s the same Bible memorization, but it has a different theme.”

When they get together to hunt, whichever trail they take, they learn a name of God, a character trait with a Bible verse and a quote with a Bible verse, Spears said. Then they have different Bible memory stations where they work and are challenged from week-to-week.

“Their hope is to make Christian hunting videos, where they demonstrate different character traits. A lot of this is about building relationships,” said Spears. “The kids are coming to hunt, but they know they are also doing a Bible study. And they love it! They don’t mind!”

About eight young men have participated, and Nick has led two of his friends to Christ through Team Blind Faith.

“We have seen a harvest,” said Spears. “It is unbelievable how they will come to Christ through this program. That’s what the boys have seen as well. There’s a waiting list to go hunting with them. It has opened the doors to share the plan of salvation.”

The ministry also has a blog address, TeamBlindFaith.blogspot.com.

The Spears family and their friends definitely have seen the results of applying I Cor. 10:31, “Therefore, whether you eat or drink, or whatever you do, do everything for God’s glory.”

Not only eating and drinking, but also riding and hunting.