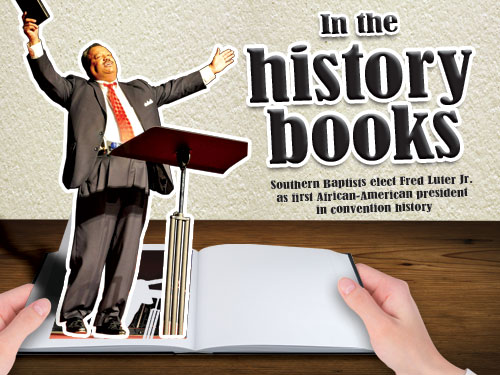 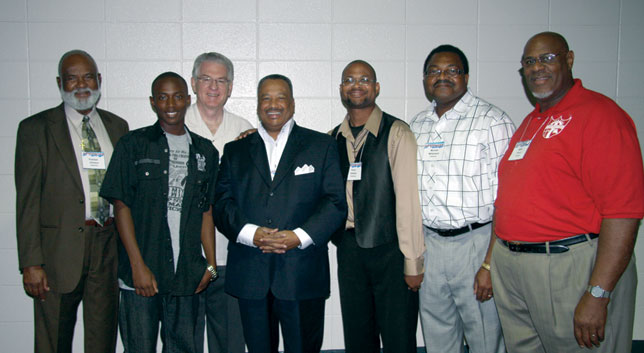 He was nominated by David Crosby, pastor of First  Church in New Orleans, whose three-minute nomination speech was interrupted four times by enthusiastic applause.

“Luter would likely be a candidate for sainthood one day if he were a Catholic,” Crosby said in describing Luter as “the fire-breathing, miracle-working pastor of Franklin Avenue Church.”

Luter grew Franklin Avenue from a remnant 65 people in a white-flight neighborhood to a congregation of more than 8,000 “when Hurricane Katrina plowed through this part of the world, destroying their facilities and scattering their people all across America,” Crosby said.

“Franklin Avenue is now (once again) approaching 5,000 worshippers each Sunday despite the depressed population of our city,” Crosby said, “and last year they baptized more than 200. Fred is the only mega-church pastor I know of who has had to do it twice, and he did it against the trends and against the odds.”

New Orleans, First took in the Franklin Avenue congregation after Katrina left the newly renovated worship center in 13 feet of water for three weeks amid flooding across New Orleans and the surrounding region in late summer 2005. The two pastors, Crosby and Luter, both with a heart for the city, began to work together in ministry. Out of that relationship, Luter asked Crosby to nominate him when—in January, after prayer and a word from the Lord pointed out to him by his wife Elizabeth—the Franklin Avenue pastor stepped forward to be a candidate for the SBC presidency.

“He is qualified in every way to hold this office,” Crosby said of Luter. “He fully supports world missions through the Cooperative Program. He is a man of integrity with a loving family and an unblemished, untarnished reputation in this community where he has lived all his life.”

Luter’s election comes at a time when Southern Baptists are seeking to turn around a numerical decline and to elect leadership more representative of the ethnic diversity that exists in the convention’s 40,000 churches.

Ed Stetzer of LifeWay Research says the percentage of non-Anglo churches has moved from one in 20 to one in five during just the last two decades.

Southern Baptists “are already a convention with great diversity in our membership ranks and our churches. If we are faithful in our work, this diversity will continue to grow,” Crosby said. “We need Pastor Fred at the head of the table, helping us understand our mission field and our mission. It is time to tap the great resource of his experience, wisdom and passion for this wider purpose.

“Messengers, we have the opportunity to make history, to show a watching world the truth about our Savior and ourselves and to affirm again the mission that undergirds everything we do. Let’s give our ballots a voice and shout out to the world: Jesus is Lord! This is our president! We are Southern Baptists!”

Luter, on stage already, could be seen wiping tears from his eyes at the extended applause that followed the conclusion of Crosby’s nomination speech.

It’s customary, current SBC President Bryant Wright said, when there is only one candidate for elective office, for the SBC recording secretary to cast one vote for everyone.

“However, this chair on this occasion believes this historic moment should fully belong to the messengers of the Southern Baptist Convention,” Wright said. He instructed the messengers to stand if it was “their pleasure” that Luter be elected president.

“To God be the glory for the things He has done,” Luter simply said. “God bless you. I love you.”

He is a popular preacher at revivals, state conventions, evangelism conferences and other Southern Baptist gatherings.

Some observers felt it was appropriate that Luter’s election took place on the day many celebrate “Juneteenth” and the anniversary of slavery’s end in the United States.