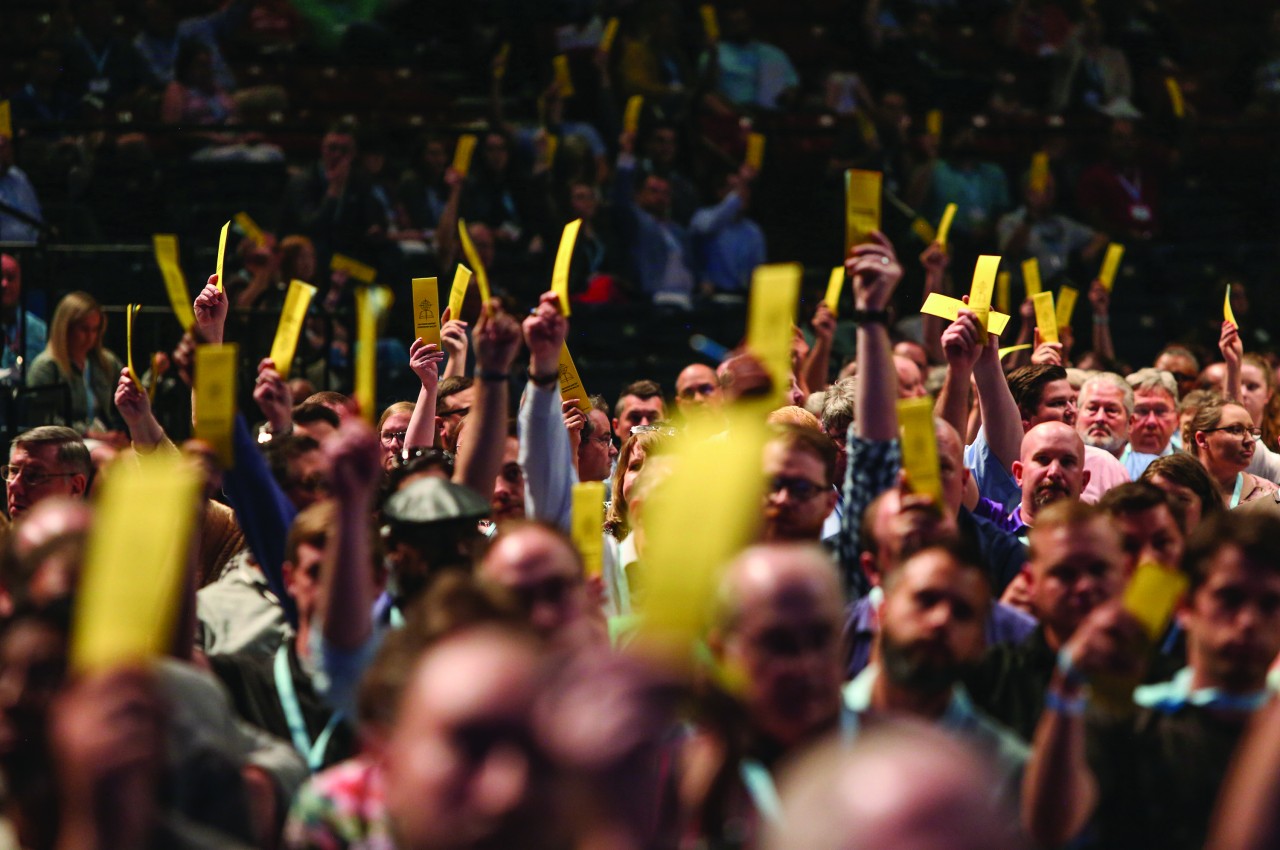 BIRMINGHAM, Ala. (BP)—By overwhelming votes, Southern Baptists strengthened their stances against sexual abuse and racism during the opening day of SBC annual meeting in Birmingham, Ala., June 11-12. 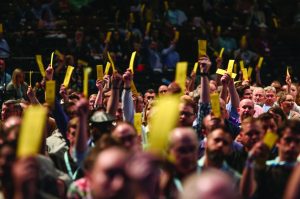 By overwhelming votes, Southern Baptists strengthened their stances against sexual abuse and racism during the opening day of the SBC annual meeting. Photos by Van Payne.

Ronnie Floyd, president and CEO of the SBC Executive Committee, told messengers after their votes, “I believe this is a very significant moment in the history of the Southern Baptist Convention. And I believe that every one of us needs to thank God for this moment.”

Messengers cast their votes—raising booklets that contained their printed ballots—for amendments to the SBC constitution to specifically state that sexual abuse and discrimination based on ethnicity are grounds for a church to be deemed as “not in friendly cooperation” with the convention.

Messengers likewise voted to amend the SBC’s bylaws to repurpose the SBC’s Credentials Committee into a standing committee to make inquiries and recommendations for action regarding instances of sexual abuse, racism or other issues that call a church’s relationship with the SBC into question.

“May this world know that the Southern Baptist Convention stands against all forms of sexual abuse,” Floyd said. “May this world know that this convention of churches—47,000 churches, plus a few thousand congregations, just under 52,000 churches and congregations—has given a clear signal not only about what we believe about sexual abuse, but we also stand against all ethnic discrimination in the United States and around the world.”

Repurposing the Credentials Committee, which formerly dealt with the messenger registration process, “is an incredible move for the future of this convention,” Floyd said. “While we may not understand it all and how it’s all going to work, we have done our very best to present to you a process.”

The constitutional amendments will require a second two-thirds messenger vote at next year’s SBC annual meeting in Orlando, Fla. The repurposing of the Credentials Commission required only a two-thirds vote this year as an amendment to the convention’s bylaws.

The changes to the bylaws included the creation of a Registration Committee to handle the duties of the former Credentials Committee.

Floyd acknowledged to messengers that the bylaws can be changed as may be needed for optimal functioning of the Credentials Committee.

“If it’s not working the right way in our minds, we can always change it,” he said. “But thank God we have today, once again, sent a clear signal, a concrete statement, that it’s not only about what we say, but it’s about what we do” in calling Southern Baptist churches to be “faithful to the things of God and to the ways we treat one another.”

“And to God be the glory for what He has done this day,” Floyd said.

Recommendations for the constitutional amendments and repurposed Credentials Committee were placed before messengers by the Executive Committee, which approved the proposals during their June 10 session preceding the annual meeting.

Messenger deliberation over the constitutional amendment on sexual abuse spanned nearly 20 minutes; there was no discussion of the racism amendment or the Credentials Committee.

An amendment to the sexual abuse wording was proposed by Ryan Hutchinson, a messenger from Raleigh, N.C., Open Door, who proposed replacing “Does not act in a manner inconsistent with the Convention’s beliefs regarding sexual abuse” with “Does not condone or dismiss or leave unaddressed sexual abuse within their church.”

Hutchison voiced concern for greater clarity for the constitutional amendment, stating that the only official statement of the convention’s beliefs regarding abuse is a brief mention in Article 15 of the SBC’s Baptist Faith and Message 2000 statement of beliefs.

EC chairman Mike Stone spoke in opposition to the amendment, citing the many hours the Executive Committee had spent on crafting the wording. The proposed amendment did not “afford the proposed clarity” the messenger sought, Stone, a Georgia pastor, said. In addition to the Baptist Faith and Message, he said the convention’s beliefs on sexual abuse also are lodged in the Word of God, which the convention believes is “inspired, inerrant, authoritative and completely sufficient.”