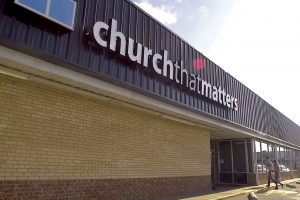 Sand Springs, Church That Matters is engaging people who have never heard the Gospel. [Photo provided]

As a church planter and pastor of Sand Springs, Church That Matters, Gunn is aware that there are many in his area who to hear the Good News of Jesus Christ for the first time.

“There are 27,000 people in our zip code, and less than 10 percent of them are engaged in a local church,” Gunn explained in the SMO video. “There is a need for churches that will engage the people of the community who are not being engaged.”

Church That Matters started with 20 people meeting in a living room. Gunn shared that God was calling them to start a church in Sand Springs. The SMO video highlighted worship services and people who are serving in the church currently. 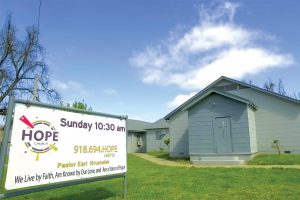 Hope Church is now meeting because of support from Church That Matters and those who give to the Edna McMillan State Missions Offering. [Photo provided]

As a church planter, Gunn has the desire to see more work done to further God’s Kingdom. “We want to take risks and plant churches, not just near us but all over the nation and all over the world,” he said.

One way Gunn is helping to multiply church plants is through identifying church planting prospects. Though he has connected with others who are involved in his church and other church work, Gunn shared in the SMO video about Earl Krumsiek.

“Earl was preaching in the streets to homeless people, reaching people like crazy,” Gunn said.

Once Krumsiek connected with Church That Matters, he was introduced by Gunn to the church planting group of the Baptist General Convention of Oklahoma (BGCO). One thing led to another, as Krumsiek shared in the video, and now he is pastoring a church plant—Tulsa, Hope Church.

“It was not an easy transition,” Krumsiek shared in the video, “but then the State Missions Offering allocated some of the offering for church planting, and that has totally accelerated some of the things that we’ve needed for marketing or for helping with events to let people know that we’re there.”

Krumsiek said SMO has helped provide many resources for Hope Church. He also shared in the SMO video how those who give to SMO are making a difference in many lives. 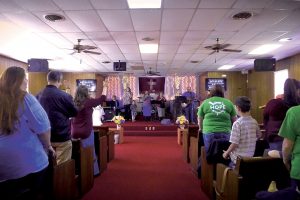 Members of Tulsa, Hope Church participate in a time of worship and praise through music. [Photo provided]

“We’ve seen people overcome addictions,” Krumsiek said. “We’ve seen marriages come back together. We’ve seen people just be transformed in Christ. It’s definitely worth it to see someone say ‘I once was lost without direction, but now I’m found.’”

Gunn is thrilled to share about the great things happening in church planting in Oklahoma. Hope Church is a prime example, as he, the Church That Matters, the BGCO church planting group, as well as those who give to the SMO are seeing direct fruits of their labor and contributions.

“Watching a church plant that you’ve been involved in, helping them get off the ground, is like watching a child grow up,” Gunn said. “For us to band together as churches in Oklahoma to bring funds and resources and prayer and people into that purpose, we can do it, if we do it together.”

Krumsiek concluded the video giving his appreciation to those who give to the SMO, how it is helping him and other church planters. He explained, “You may look at it as ‘I’m giving to the state offering,’ but what that does is it helps people like myself and other church planters who are impacting others’ lives who we’ll never meet on this side of heaven. But because somebody gives, there are people that are impacted, and eternities are being changed.”

For more information on SMO and to view the SMO videos, visit www.statemissionsok.org.