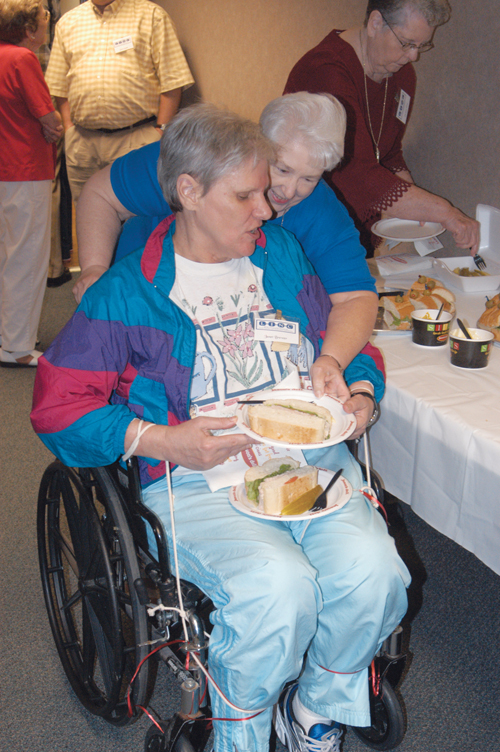 Just how many ways are there to minister to residents of rest homes and retirement villages? Kathy Matthews isn’t sure. But, she IS sure she wants to learn everything she can to reach out to senior adults through her church’s ministry at Emerald Square Assisted Living Community in northwest Oklahoma City.

Matthews joined more than 30 others at a LINC (Loving- Inspiring-Nurturing-Caring) workshop sponsored by Baptist Village Retirement Communities Aug. 2 at the Baptist Building. It was the third such workshop she has attended.

“I really enjoy coming to the LINC training,” Matthews said. “Every time I come, I learn new ways to respond, react and minister to the people in the retirement center we’re working with.”

“I’m the director of the LINC program for our church, and activities director for our church,” Matthews said. “I was led by the Lord to minister to the elderly. I took care of my grandparents for 13 years. I was in the facility with them a lot, and didn’t see a whole lot of spiritual food for my grandparents.

“When our church decided to work with the elderly, it was something that I felt the Lord had led me to do.”

Matthews’ grandfather died five years ago and her grandmother three years ago.

South Oklahoma City has about 25 on its rolls, with 13-15 active members, Matthews said.

“Our attendance is pretty much 100 percent of active members,” she revealed. “We have about 13 every Sunday morning and evening and Wednesday.

At 3 p.m. every Sunday, that “baker’s dozen” comes together to conduct a worship service at Emerald Square. The ministry began in January after Matthews had attended the Capital Association Annual Meeting last fall and picked up some LINC information at the BVRC booth.

Pastor Dahl Adams has been involved in rest home minstry for quite some time.

“We had been going to two rest homes in Yukon, but circumstances caused us to stop going there and we had been praying for the Lord to lead us to another ministry like that. Our folks just have a particular heart for ministry to the elderly.”

“It has been such a blessing for our church,” Matthews said. “I love the smiles on their faces when they see us come in. Over the months, we have learned a lot about some of the people there. For instance, there is a retired missionary; he had lost his wife, and he pretty much felt like his life was over. We found out he loves to pray. So, our pastor always asks him to pray at some point during our service.”

As for the LINC workshop, Matthews said BVRC Director of Chaplain Services, Chris Finley, and Cathy Tisher, chaplain consultant, “share their love for the elderly and for the Lord. When we get to the part where we start sharing and come up with ideas of how to relate to the residents, that’s the part I love the most. They give us great ideas about how to do that.”

As with most senior adults, Emerald Square residents love to sing. So, the church’s worship service always includes a good dose of hymns, combined with testimonials. Residents are aided by large print song books.

“Our ministry is acapella, with an occasional tape,” Matthews said, adding that her main responsibility each Sunday is to “round up” the residents for the service.

“We go early and start to round them up. If they’re not feeling up to coming, I pray with them,” she said. “That’s basically my job-to go around and knock on doors and gather them up. But, a lot of them are already in the lobby waiting on us when we get there.

“Sunday before last, the retired missionary wasn’t feeling good and he said, ‘I don’t think I’m going to come.’ I said, ‘Well, we’re going to miss you, I always look forward to your prayers.’

“So, I prayed for him and asked the Lord to give him strength and help him feel better. About five minutes later, he showed up, and everybody cheered, because they had looked forward to seeing him.

“He felt so good when he left, I’m sure the love he got made him feel better. I know it does me.”