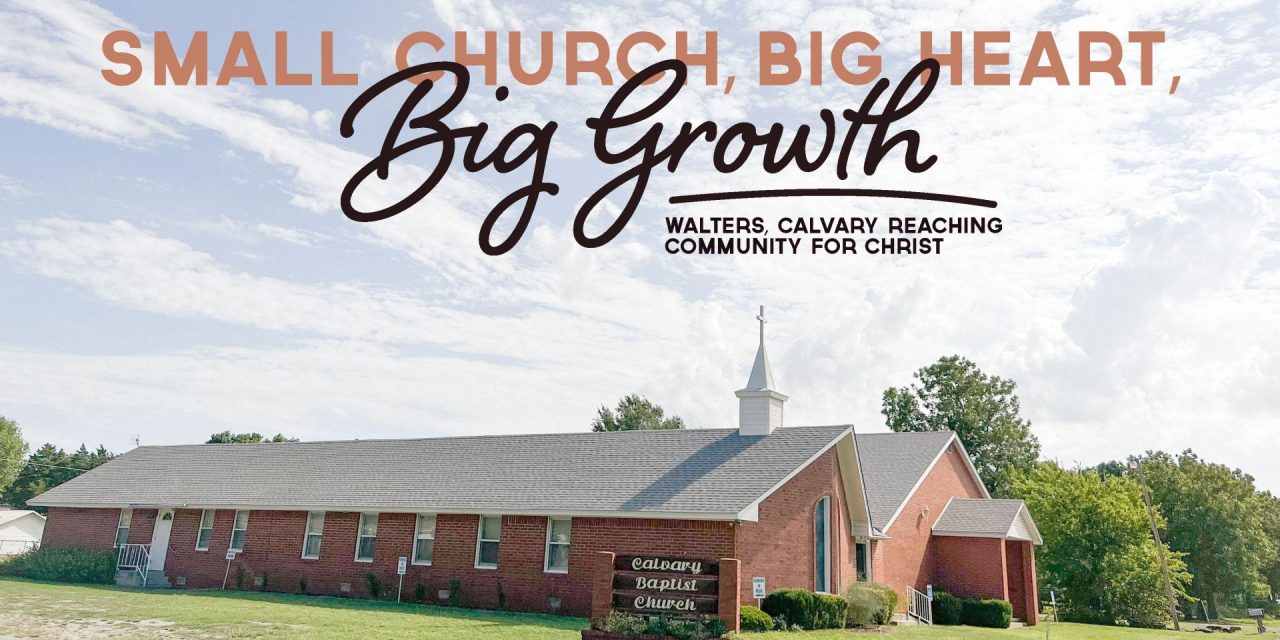 WALTERS—The town of Walters, Okla., according to recent census data, has a population of 2,701. The city, situated in southwest Oklahoma in Cotton County, has the motto “small town, big heart.” 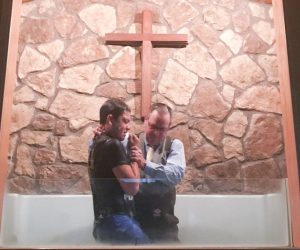 Walters, Calvary Pastor Roger Snow baptizes a youth who recently made a profession of faith. The small church has seen explosive growth since 2018.

Among the handful of churches located in Walters is a small church with a big heart—one that has been reaching out to its community and, lately, has seen big growth.

Just a few years ago, Walters, Calvary averaged about a half dozen people in attendance on Sunday, according to a report. Fast forward to today, and the congregation is seeing near four times that number in average Sunday attendance.

Pastor Roger Snow, a multi-vocational pastor who came to the church in 2018, attributes it all to the Lord.

“God is moving in our midst,” he said. “We started out very slow after I came. But in November of 2019, I baptized our first youth, and from that point on, we were off and running.” 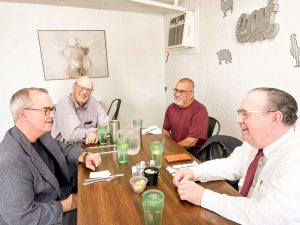 The church members were energized to do outreach, such as going out on Saturday mornings to pass out flyers. Snow also got involved in various aspects of community life, including the ministerial alliance, with the help of his friend and fellow pastor, Jack Jacob of Walters, First.

Attendance at Calvary increased in 2020, even amid COVID. “By 2020, we were up to around 17 or 18,” Snow said. “There were 11 weeks the church was closed in the pandemic, but we did not miss a service. I preached every Sunday on home via Facebook. After we opened back up, we continued our online presence, and the Lord helped us grow again.” 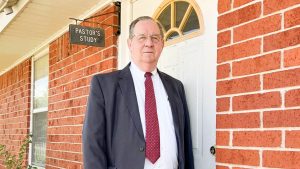 Snow gives ‘all glory to God’ for the church’s growth.

“We averaged 28 each night of our revival,” Snow said. “This year, I baptized two, and we have had four come forward for membership.”

In July, the church marked its 70th anniversary and had 49 people in attendance at the “birthday celebration.” Snow’s wife Sue helps in various ways around the church, including with hospitality and meals and outreach.

Other several faithful members including Mark Blackford, Nancy Coleman and Gerald Hayes each feel blessed to see the church strengthen.

Blackford has been attending for nearly two years, and he helps on a weekly basis with the church facilities, having done improvements to the church building’s exterior and interior, including painting, remodeling and other repairs. Blackford called it “the friendliest church you could imagine.”

Coleman has helped initiate efforts to reach people connected to the public school in Walters. The church currently feeds the Walters High School football team on Fridays as an outreach. Two of the team’s players attend Calvary, and Pastor Snow believes these young people are vital to the church.

Coleman also remarked that the church is “committed to the Gospel of Jesus and to missions,” as the congregation designated 10 percent of its budget to Cooperative Program giving and three percent to associational missions. Calvary also participates in the Lottie Moon Christmas Offering, Annie Armstrong Easter Offering and Edna McMillan State Missions Offering.

“We are overjoyed to be part of this work, and we also support the Baptist (Girls) Homes for Children in Madill,” she added.

Hayes, who serves as a deacon and who also led in music, was part of the committee who called Snow to be pastor. A retired judge, Hayes said, “The church family is unified and on mission. We are blessed to have Brother Roger as our pastor, and I’m thankful the Lord led him here.”

Hayes sees the Wednesday evening Bible Study and prayer times as key to the life of the church.

“We used to have only a few of us gathered to pray, and that number has grown significantly. This is a church family that prays together,” he said.

Preaching the Word, being outwardly focused on the community and upwardly focused on prayer, with a mission mindset. These are just a few of the positive elements at Calvary that Troy Taylor, director of missions in Comanche/Cotton Association, sees.

“This is a church doing the right things the right way,” Taylor said. “This is exactly how a biblical church should function, and it’s a joy to see.”

Snow expresses appreciation for Taylor. “He has been my crutch to lean on, and he supported me and this church since day one,” Snow said about Taylor. “He is not only my friend. He is someone whom I rely on a lot. His door is always open to any of the pastors in our association. Not just me, but all.”

Snow is newer to the pastorate. Having served a full career, including in the military, Snow came into the ministry later in life.

“The Lord called me to be a deacon in my 40s. He called me to preach my 50s,” Snow said. “It was not until my 60s that I sensed a call from the Lord to the pastorate.”

Yet Roger Snow would not attribute the growth and vitality of this small church to himself.

“This is not about Roger Snow at all,” he said. “I just preach the Word of God. The Lord has done all of this.”

The next time you are in Walters, look for this small, but growing church. A church with a big heart that is reaching people for the big God we serve.