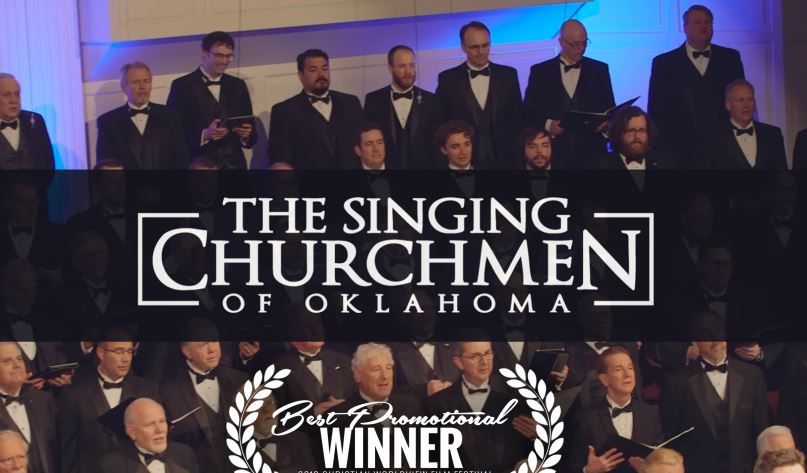 SHAWNEE –A promotional film for the Singing Churchmen of Oklahoma took home the Best Promotional Film award from the 2019 Christian Worldview Film Festival held in Franklin, Tennessee in March.

The Christian Worldview Film Festival is held each year in Franklin, Tennessee and has over 1000 attendees. Awards include “Best Feature Film,” “Best Documentary Feature,” “Best Gospel Presentation,” and twelve other awards. The Singing Churchmen promo was competing against ten other films in its category,” Burnett said.The film was directed and produced by John-Clay Burnett of ReelCast Productions. “We were grateful for the opportunity to capture the Singing Churchmen’s passion for sharing the gospel and encouraging God’s people.” 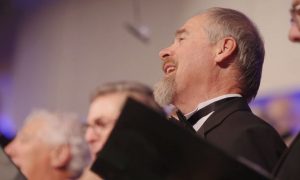 The video, which features comments from Singing Churchmen Scott Neighbors, Skiatook, First, Sean Muzljakovich and Bob Yowell, both from Tulsa, View Acres and Ken Bartholomew, Durant, First was created to promote the Singing Churchmen of Oklahoma.

The Singing Churchmen of Oklahoma (SCM) is completing their 58th season of ministry. Director Randy Lind explains the reason for the group’s existence, “As a whole the Singing Churchmen are about one thing, taking the Gospel of Jesus Christ wherever we go, as ministers of music, as men.”

The years and decades have seen the group travel across Oklahoma, much of the United States, and many parts of the world.  Some of the men who currently sing in the group have been in the group since its inception, when the SCM first stepped on the stage. 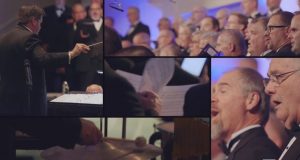 “Music is the outward thing that people see and certainly hear, when the SCM gather, however, music alone has not been the glue that has held the Churchmen together.  The SCM began, and continue to have a passion to share the Gospel through their lives and in their music.   Behind the scenes and in the weeks in between concerts, the SCM are engaged in ministry in the local church.  The “secret sauce” for the SCM is the strong network of prayer and other types of support that the men have.   This is a rare and needed thing in a man’s life,” Lind said.

Film producer Burnett said, “The most common response we’ve heard when showing this video at the film festival is ’It makes me want to attend their concert!’” Already, the choir has started preparing for a new season of concerts. The Churchmen begin their 59th season on October 10 at the Stroud High School Performing Arts Center.  The choir will be one of the first groups to sing in this new multi-million dollar facility for the arts.

The Singing Churchmen along with the Singing ChurchWomen have also begun rehearsal on a new recording project.  The new project will be recording this June at Moore, First and will feature 11 new arrangements of songs.  One of the songs, “This is my testimony,” was co-written by BGCO Worship Specialist, Randy Lind, along with Phil Barfoot and Rebecca Peck.  All 11 songs will be released for use by church worship teams and choirs by through Lifeway Christian Resources.  The first release will be in the fall and will continue over the next nine months.

On Thurs., Nov. 7 at Edmond, First, BGCO’s Worship: A Night of Worship—both choirs will sing all eleven songs at a special night of worship. There will be a “very special” package of the CD’s for people to purchase for family and friends, which will help spread to Gospel around the world.