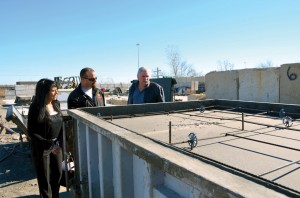 Eight months after an eventual EF-5 tornado  touched down west of Newcastle and roared northeastward for 17 miles during a 39-minute reign of terror that ripped through the heart of Moore, Sam Porter is close to seeing his dream of a safer heart of Oklahoma come to fruition.

Thanks to the heartfelt donations of thousands of people—many who never have, and never will, put a foot down into the red soil of the Sooner State—Porter is at the launching point of providing 100 in-ground, concrete storm shelters for survivors of the May 19-20, 2013 storms.

Porter hopes planting those concrete shelters—which the BGCO is purchasing through a special deal with Metheny Pre-Cast of Oklahoma—will also plant seeds of hope for the future for so many who have been through so much.

The peak winds of 210 miles-per-hour that accompanied the twister on May 20 almost a year ago killed 24 people directly and cause one other death indirectly. Despite following the similar track of a previous even-deadlier May 3, 1999 Bridge Creek-Moore tornado, very few homes and neither of the two Moore schools destroyed by the 1.3-mile-wide May 20 tornado had storm shelters. 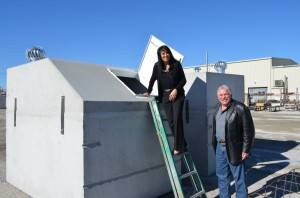 Saffa prepares to examine the inside of one of the 100 shelters the BGCO plans to install for storm survivors this year as Porter looks on.

Through a partnership with the North American Mission Board (NAMB), the Baptist General Convention of Oklahoma (BGCO) has a goal of installing 100 storm shelters during this year, Porter said. About half of them will be located at sites where the BGCO has, or will be, replacing mobile homes for families who lost their residences in the storm.

“We will install a storm shelter for all of the families who have received a mobile home,” Porter explained. “That will be a great psychological lift for them, and in a way, provide a sense of security, especially  for those who have ridden out a storm in their home.

“So, for the 50 mobile homes we are going to put in, that’s where half of these 100 storm shelters will go, we already know that.”

The BGCO has already put in place 23 mobile homes, and has purchased another 20 to be refurbished.

“We have a total of at least 100 shelter sites identified through pastors, other agencies we work with and community leaders,” Porter said.

Eight shelters will go into Steelman Estates, west of Shawnee, as community shelters, Porter indicated. They will be  scattered out and be no more than one block away from any residence.

“Before the storm, there were 90 mobile homes in that area, and the majority of them were blown away by the tornado,” he said.

Saffa also has been helping coordinate the placement of the mobile homes for tornado survivors working with three other state disaster relief leaders.

“We have also purchased a backhoe to support the project, and then we’ll roll it over into our disaster relief fleet,” Porter added.

The BGCO currently has two Skid Steers, which aren’t large enough to handle the heavy job of installing the storm shelters, whose outside dimensions are just over six feet-by-eight feet. The walls are six inches thick, and each shelter has the capacity to accommodate between 12-14 people.

“We’ll use the backhoe for storm shelter installation and also for cleaning up debris,” Porter said. “With the tornado effort here, we were able to take down a lot of damaged homes once they were declared a total loss, but we had to go rent either track hoes or backhoes to knock  the houses down.

“It’s so dangerous to do that with a Skid Steer, because it’s so much shorter, and the  roofs and walls of the structures could fall back over on it and the operator. We will now be able to use the new, much larger backhoe in fire and tornado recovery; it will be a valuable asset for us.”

The existence of the new backhoe opens up a new avenue of service for volunteers, Porter said.

“We are seeking several Oklahoma Baptist laymen with back hoe operating skills to join us on a team to install these across the May 2013 storm track,” he said. “Those individuals interested  in assisting do not have to be members of the disaster relief team. We just want several individuals who want their lives and skills to make an eternal difference in someone’s life.”