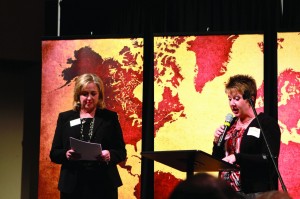 The 2014 Missions Celebration, “Secrets to Surrender,” was held prior to the 2014 BGCO Annual Meeting, Nov. 10 at Oklahoma City, Quail Springs. The event included a testimony from an IMB missionary in a high-risk country, Oklahoma Woman’s Missionary Union (WMU) business, including the election of a new president and recording secretary and special guest National WMU President Debby Akerman.

The IMB missionary shared inspiring stories of how God brought to life the Scripture, “For me, living is Christ and dying is gain” (Phil. 1:21 HCSB). Those present were urged to continue to life up all IMB missionaries as they spread the Good News around the world. 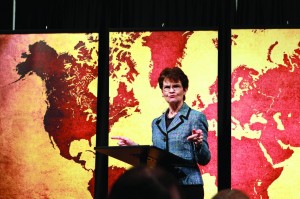 Akerman shares how the Bible explains “Secrets to Surrender.”

Akerman gave a motivational speech about Secrets to Surrender. She challenged the audience to gain a better understanding of what surrender looks like in a Christian life. She emphasized that the totally surrendered life always points to Jesus.

A personal Scripture that spoke to Akerman during her search for surrender was Num. 14:24, when God was speaking to Moses about Caleb.

“The patriarchs and matriarchs of the Old Testament have in common a love for God, a call from God and an obedience to God,” Akerman said. “But Caleb is the only one of whom God said, ‘He has a different spirit and follows Me wholeheartedly.’” 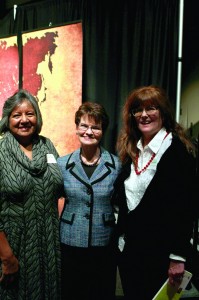 One key, Akerman explained, was that Caleb was willing to be a minority voice in spite of great personal risk.

Caleb was willing to go where it was uncomfortable and hard to follow God’s leading. Akerman described that place as Caleb’s “Samaria.” The final challenge Akerman presented was for those in attendance to think about their Samaria.

“How many of you have been to Samaria?” Akerman said. “The place where your past pain and your personal prejudices and private fears try to keep you from saying with Jesus, ‘I must go through Samaria.’

“When we surrender to do the things that have been the hardest thing, we surrender, we are transformed. So where is your Samaria? What pain have you endured? What heartache have you borne that God wants to use? He will use it for His glory if you will go through Samaria.”