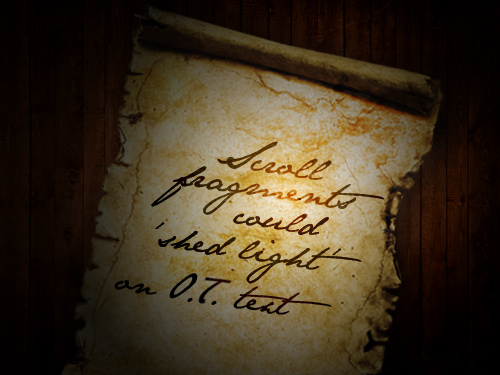 FORT WORTH, Texas (BP) —The potential contribution to Dead Sea Scroll scholarship of nine scroll fragments owned by Southwestern Seminary was underscored when several SWBTS professors discussed their research to date during the Society of Biblical Literature’s 2011 meeting in San Francisco.

“Southwestern’s scrolls contain readings of Old Testament passages that are nowhere else attested,” Ryan Stokes, assistant professor of Old Testament, noted after the SBL’s three-day mid-November meeting. “We are just beginning to comprehend their importance for the field, but we expect them to shed light on how we came to have the Old Testament text that we have today.”

Southwestern Seminary currently houses the largest collection of fragments owned by an institution of higher education within the United States. The seminary will host an exclusive exhibit of the scrolls from July 2, 2012, to Jan. 11, 2013. To learn more about Southwestern Seminary’s exclusive “Dead Sea Scrolls and the Bible” exhibit, visit http://seethescrolls.com.

At the SBL meeting, Southwestern professors introduced the scroll fragments to the academic community, demonstrating the seminary’s commitment to contribute to the field of biblical scholarship.

Steven Ortiz, associate professor of archaeology and biblical backgrounds and director of Southwestern’s Tandy Institute for Archaeology, introduced the session focusing on the scroll fragments.

“The accumulation of data and how it was presented showed that these were some important fragments,” Ortiz said. Southwestern’s professors displayed an in-depth knowledge of the particular fragments they researched, Ortiz said, as well as setting forth the implications the fragments have for a broader field of research.

“With the initial announcement of Southwestern’s acquisition (in January 2010), all the emphasis was placed on the purchase of the scrolls,” Ortiz said. “So that is the only thing that people knew about Southwestern’s Dead Sea Scroll fragments.

“After this presentation, the perception has shifted, and now they’re seeing that Southwestern is serious about becoming a center for biblical research, as the Dead Sea Scrolls affect biblical scholarship.”

Ortiz said Southwestern professors will continue this contribution to biblical scholarship by placing the seminary’s fragments within the larger corpus of the scrolls. They also have contacted scholars outside the seminary who are researching other unpublished scroll fragments. In time, the seminary will publish its scroll fragments in a major peer-reviewed journal on Dead Sea Scroll research.

During the SBL meeting, Southwestern also invited scholars from outside the seminary to present research related to the Dead Sea Scrolls. Ortiz noted that Southwestern was “very fortunate to have top scholars on the panel,” including Bruce Zuckerman, director of the West Semitic Research Project and associate professor of Hebrew Bible at the University of Southern California. Zuckerman led a team that photographed Southwestern’s Dead Sea Scroll fragments last September. During SBL, Zuckerman discussed the imaging technology that allows scholars to publish ancient texts in high-definition as well as to read otherwise illegible texts.

In particular, Flint argued that Southwestern’s scroll fragments, alongside others, have revealed which biblical texts were most widely read by the Jewish community that preserved the Dead Sea Scrolls and hid them in the caves near Qumran. As such, the scrolls not only illuminate the biblical text, but they also inform scholars about those who copied and read the scrolls 2,000 years ago, during Jesus’ lifetime.