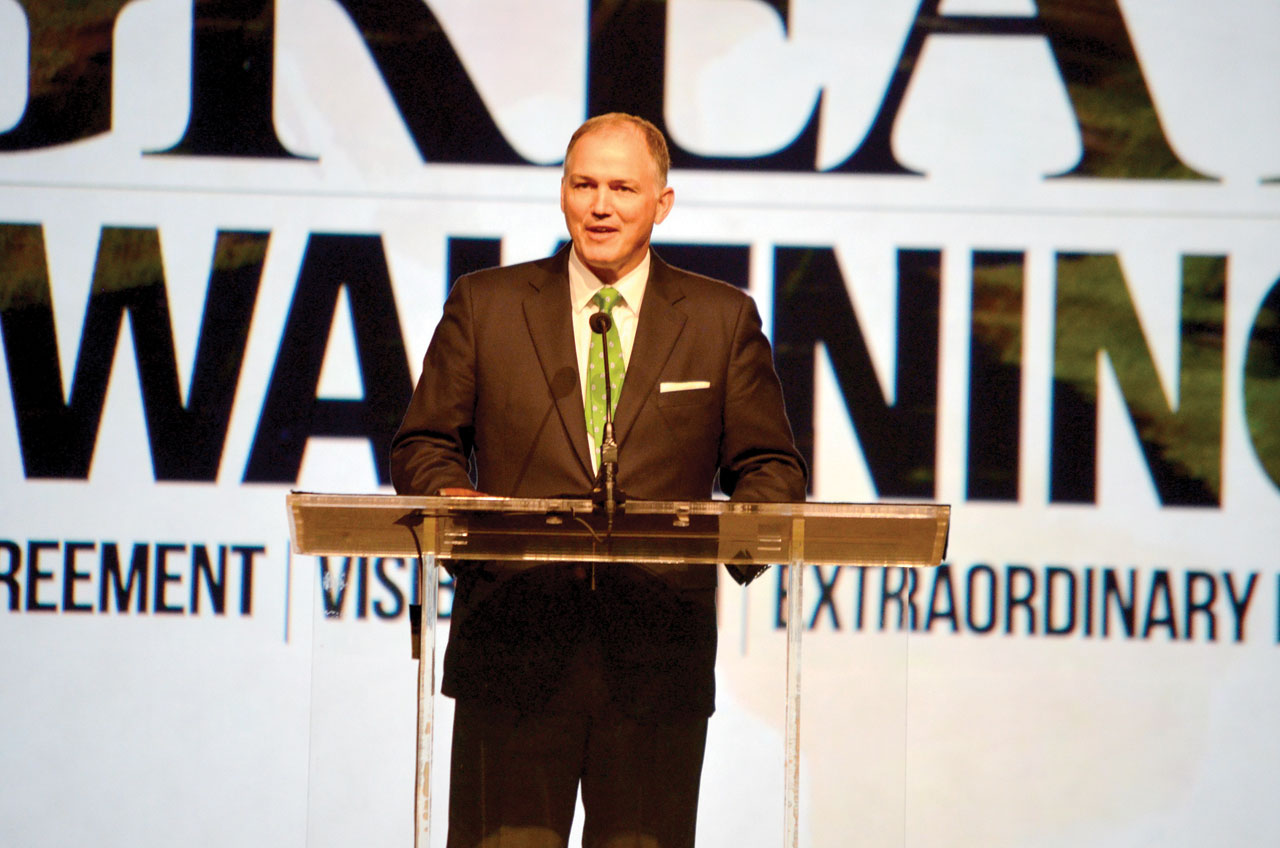 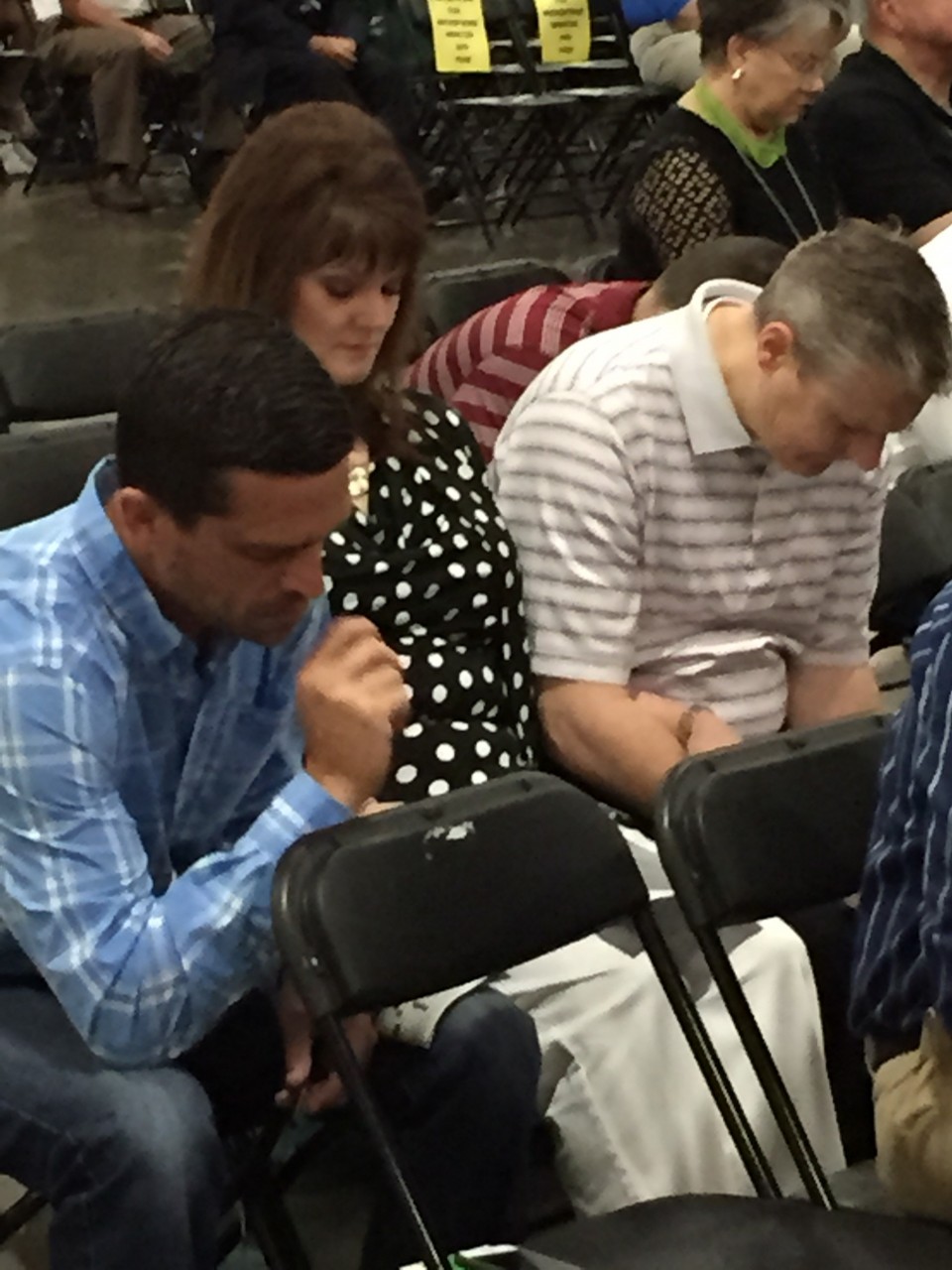 From left, Pastor Will Wilson, Jr. of Tecumseh, New Hope, and Lana and Pastor Doug Melton of Oklahoma City, Southern Hills, participate in a prayer time at the SBC meeting (Photo: Brian Hobbs)

The meeting was punctuated with business, elections, and resolutions, as well as significant times of prayer, worship and preaching.

Floyd was reelected without opposition to a second term as SBC president during the Tuesday afternoon session, June 16.

Floyd was nominated by North Carolina pastor J.D. Greear, who said, “God’s hand has been upon Brother Ronnie. I believe he is the man God has raised up to lead us for another year.”

All other SBC officers for the coming year also were elected without opposition. 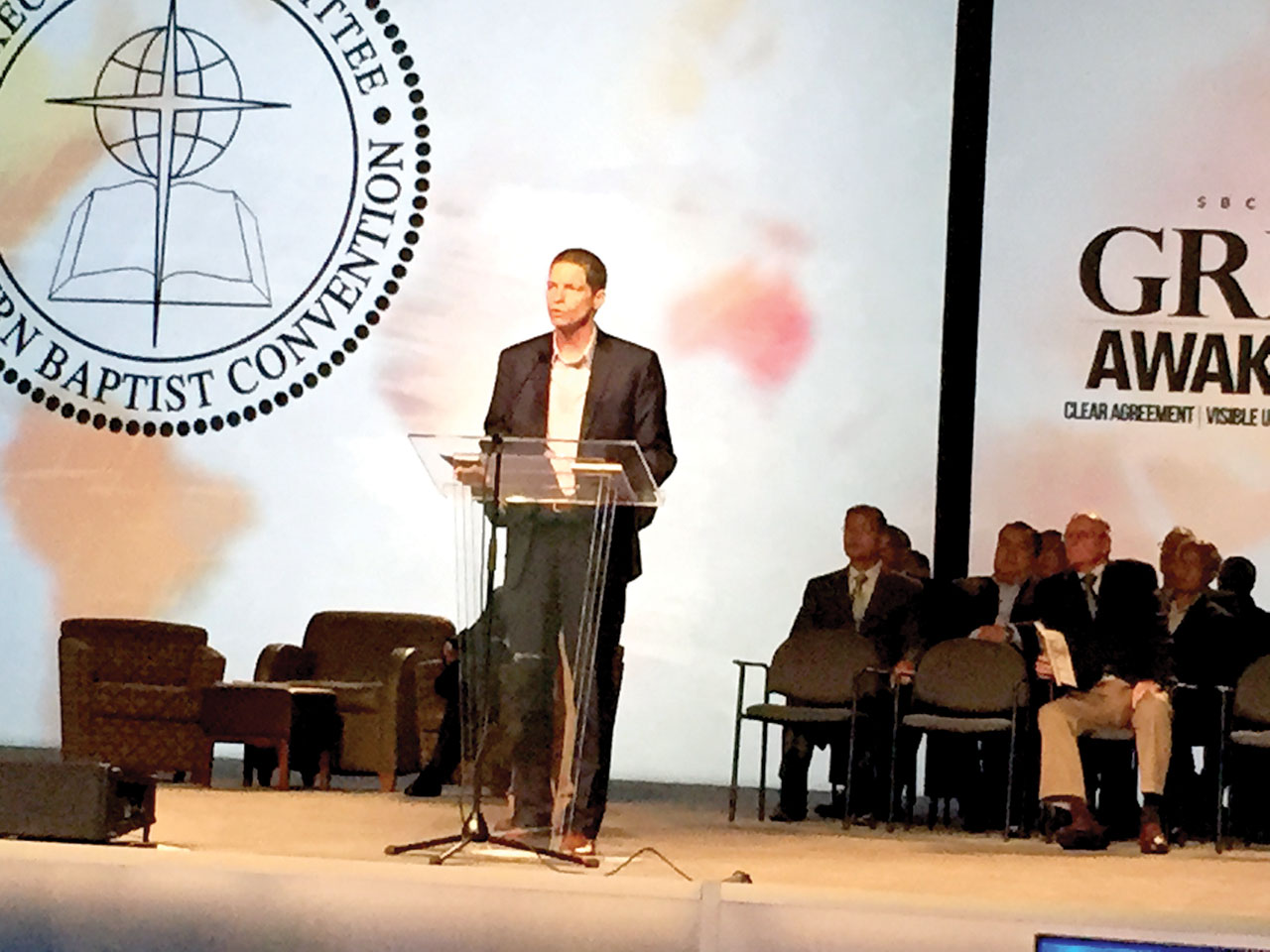 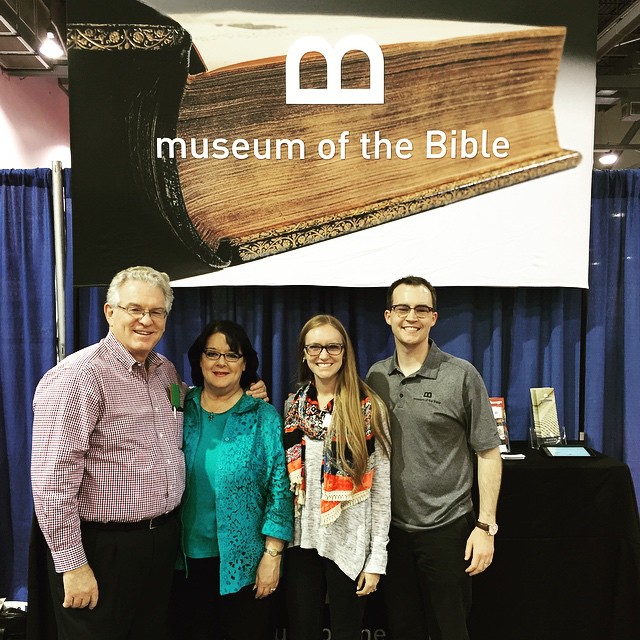 From left, Anthony L. Jordan, BGCO executive director-treasurer, and his wife, Polla, stopped by the Museum of the Bible booth and visited with Lauren and Michael McAfee, young adult pastor of Bethany, Council Road

All the resolutions offered in the Tuesday afternoon session, June 16, gained passage by unanimous or nearly unanimous votes. The messengers affirmed biblically-based stances on such topics as same-sex marriage, racial reconciliation and the sanctity of human life, as well as religious persecution and pornography. Resolutions also called for spiritual awakening and celebrated the 90th anniversary of the Cooperative Program.

“There are so many pressing issues morally and spiritually in our nation right now, it really didn’t take long to figure that out,” Steve Gaines, senior pastor of Cordova, Tenn., Bellevue, said at a news conference after the committee’s report. Gaines is serving as resolutions committee chairman. “We want to speak the truth, but we always want to do it in love and redemption. And we are not in any way angry with anybody. We love everybody. But when you love the Lord, you have to say what the Bible says.”

• urged the Supreme Court in its decision this summer to affirm the right of citizens to limit marriage to a male-female union, reasserted the SBC’s belief in the biblical view of marriage no matter how the justices rule and called for religious freedom for individuals and organizations who conscientiously object to same-sex marriage.

• called for SBC churches and entities to work toward racial and ethnic diversity in their leaders and encouraged Southern Baptists to be “faithful ambassadors of reconciliation.”

• affirmed the sanctity of human life “at all stages of development” and exhorted Southern Baptists to seek “the repeal of unjust laws and inhumane practices that degrade human life.”

• denounced all religious persecution and called for Southern Baptists to pray for persecuted Christians during personal times and corporate worship.

• expressed grief over the destructive impact of pornography and affirmed the power of the Gospel of Jesus to deliver those who have committed sexual immorality.

• pledged a commitment by Southern Baptists to seek God and to pray that He would bring revival.

• expressed gratitude to God upon the 90th anniversary of the Cooperative Program for His leadership in its establishment and encouraged Southern Baptist churches to consider increases in their giving through it.

• thanked God and all those who helped with this year’s meeting. 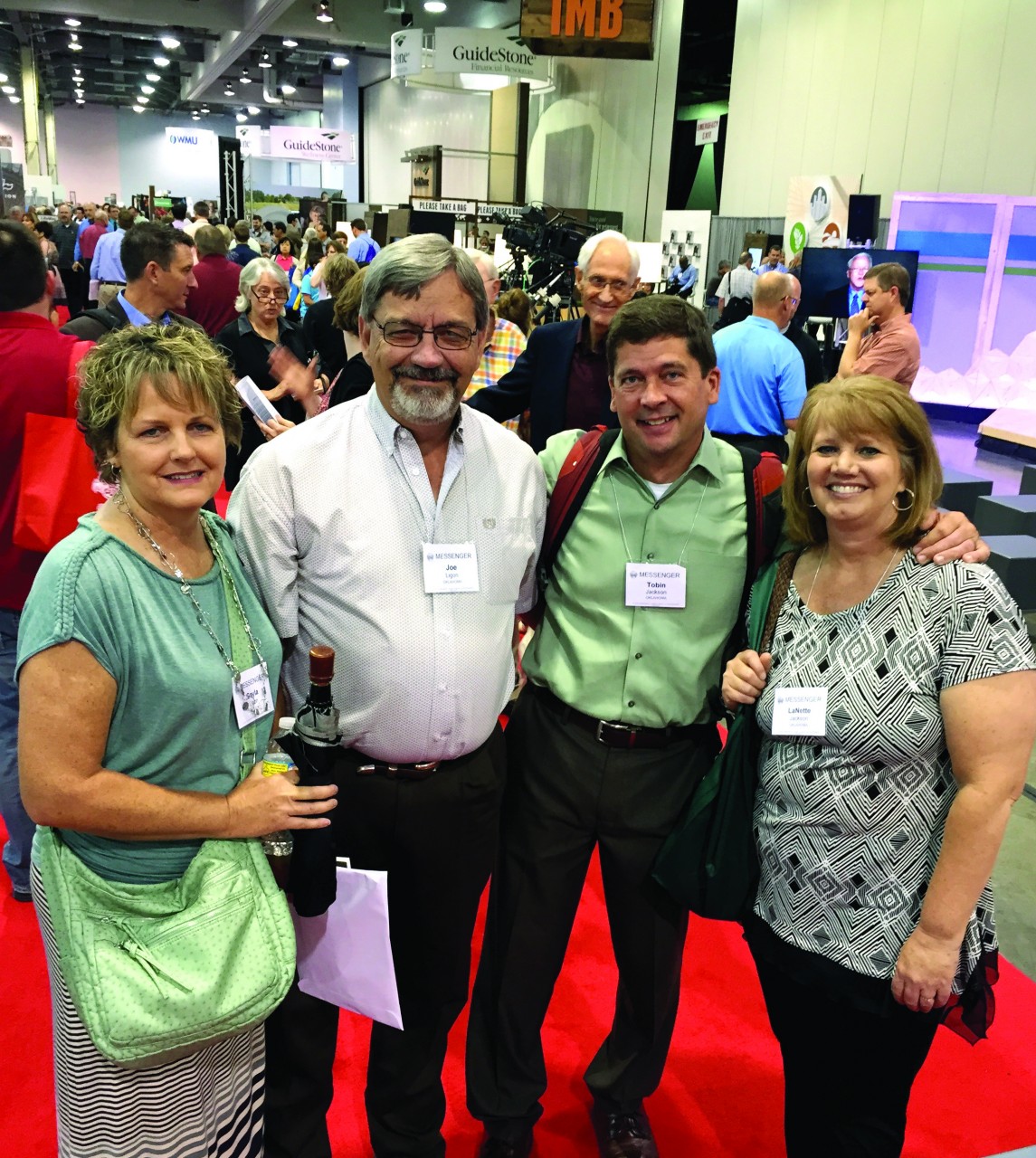 From left, Gayla and Pastor Joe Ligon of Marlow, First, with Pastor Tobin and LaNette Jackson of Oklahoma City, Trinity, visit in the exhibition hall at the SBC annual meeting (Photo: Brian Hobbs)

Of the many SBC leadership positions and committee appointments, Oklahoma Baptists found themselves filling many important roles this year. They include Hance Dilbeck, senior pastor at Oklahoma City, Quail Springs, who served as SBC second vice president.

Messengers voted to approve a name change for Golden Gate Seminary to Gateway Seminary. The vote was the first of two required to confirm the name change, with final approval to come at the 2016 SBC meeting. The change is part of a transition process to move the main campus of the seminary from Mill Valley, Calif., to Ontario, Calif.

Full ministry reports were presented by entities, including all six Southern Baptist seminaries, the Woman’s Missionary Union, the International Mission Board (IMB), the North American Mission Board (NAMB), LifeWay Christian Resources and the Ethics and Religious Liberty Commission (ERLC).

During the Executive Committee’s report, messengers honored former IMB president Tom Elliff, former pastor of Del City, First Southern, with a resolution of appreciation for his three-plus years of service as president of the mission board. Elliff retired in August 2014 and was honored for his lifetime of service in Southern Baptist missions and ministry.

Elliff and his wife, Jeannie, were unable to attend this year’s annual meeting. Messengers prayed for Jeannie, who is battling cancer.