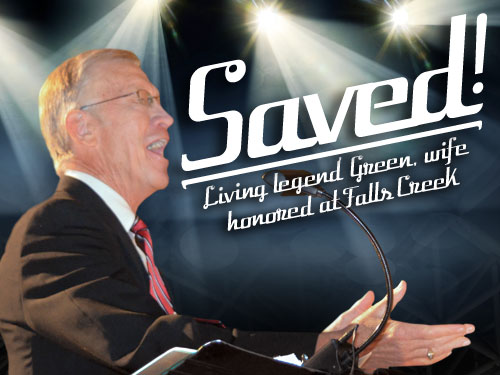 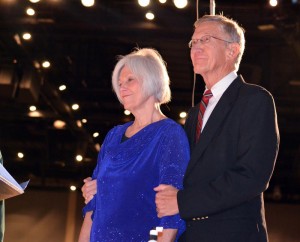 DAVIS—For years, he led multitudes to proclaim their lives are now sweet and their joy is complete. Now, Bill Green and his wife Linda will be linked to the place where they served many summers and impacted many lives.

On April 6, the Singing Churchmen and Churchwomen were in the R.A. Young Tabernacle at Falls Creek Baptist Conference Center for a recording session of an upcoming release. That morning, Anthony L. Jordan, executive director-treasurer of the Baptist General Convention of Oklahoma, made a surprise presentation to Bill and Linda Green, reading the following proclamation:

“For his 14 years of esteemed and excellent leadership of Falls Creek Youth Assembly as its program leader and as project manager during the building of the R.A. Young Tabernacle; and Linda Green as she has sacrificially and faithfully stood beside Dr. Green during his years of service; we therefore, joyfully and gratefully acknowledge their significant contribution by naming the choir loft in the R.A. Young Tabernacle as the ‘Dr. Bill and Linda Green Choir Loft.’”

Jordan expressed to the combined singing groups, which Green led both for many years while serving as BGCO associate executive director, that there were several venues to make this presentation, but he said, “I couldn’t think of a better place or a better time than when you are all here together at Falls Creek.

Jordan also spoke about the time he asked Green to step aside from leading music in order to assist in the construction of the current Tabernacle. He praised Green’s efforts and said the Tabernacle is a demonstration of Green’s expertise.

“This building stands here today as a beautiful edifice that God has given us, that has now been used hundreds of times by thousands and thousands of people,” Jordan said, pointing out that Falls Creek reached a record number of decisions for the Lord last summer.

Green was filled with emotion as he and Linda stood by Jordan and heard roaring applause during the presentation. He shared with the group he and Linda will be celebrating their 50th wedding anniversary in June. He praised his wife, saying how she has been a great support to him and shared his commitment to leading people to praise the Lord.

“Every time Linda and I pulled away from Falls Creek on Friday evening when the assembly was over, we stopped and prayed and thanked God for the privilege of being able to do what the Lord allowed us to do,” Green said, recalling his time leading music during the summer camps.

Green also spoke about his time helping to oversee the construction of the tabernacle and other Falls Creek structures that “it was a blessing to spend those two and half years doing that, and now seeing a facility that is beyond what any of us imagined it being.

“I am thankful for the leadership of our convention, for Dr. Jordan and his vision for so many things, especially for taking on the heavy responsibility to raise the many dollars for the Falls Creek campaign that has proved out to be something that all of us take great joy and pride in,” Green said.

After Jordan led the group in a moment of prayer, an impromptu singing broke out of the hymn “Saved, Saved,” which Green famously led every week at Falls Creek. The longtime conductor immediately took his role and led the choir, holding out each “Saved” in the chorus while some members pretended to do drum rolls.

“I have great love beyond what I can even express about Falls Creek. It is truly a hallowed and holy place,” said Green. “I had the privilege for many years to stand on the old Tabernacle stage and lead thousands of young people to sing praises to the Lord and also watch literally thousands of young people make decisions for Christ. I shall hold those memories in my heart forever.”