Rite of passage: The adventure

For a couple of months, Titus the Honorable and I have been planning a big adventure. Of course, planning with a 3-year-old only takes about a minute. A recent Saturday was our big day: just Titus and me, heading off on a journey into the dark forest to look for snakes. 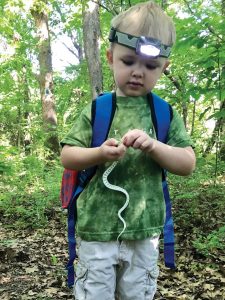 very far, you’ll hit an interstate highway on three sides and the Arkansas River on the other. And if you go deep enough into the woods, you will come to Lake Stinky Doo, which is the sewage processing plant for Tulsa.

When I arrived to pick Titus up, he had already packed his “pack pack” with a bottle of water and two different containers. One held tiny Goldfish crackers and the other one, grapes. We loaded up the car and headed to the dark forest, which only takes about 10 minutes. The reason I call it the dark forest is that some of the trees have grown up and over the trail, providing shade, and it does get a little dark along the path.

We took about five steps on the trail when I heard that squeaky, mouse-like voice: “Poppy, don’t you think it’s time we took a break and had a snack?”

I said, “We’re getting close, but we need to find a big rock to sit on to have our snack.”

As we reached a shadier part of the trail, I heard his little voice again: “Poppy, we need to put our headlamps on.” So we put on our headlamps and looked around the dark forest, trying to find a snake. As the grandfather, I wasn’t about to disappoint a little boy on his first big adventure. I had brought along two rubber snakes, and when he wasn’t looking, I would toss one of them about 15 feet ahead on the trail. As we kept going, I heard a squeal, “Poppy, Poppy, look, a SNAKE!” And then I got a lecture about how to pick up a snake. “Poppy you never pick a snake up by the tail; it can bite you. You have to reach behind the head to pick one up.”

After the lecture came the demonstration as Titus squatted down and with a swift hand, grabbed the rubber snake behind the head and held it up, showing his prize. Then we would walk for another five minutes when again, he would find a snake lying in the path.

After Titus had caught four snakes, we found the rock where we could sit and have our snack. As he was eating his grapes and I was eating his Goldfish, I could tell he was thinking hard. “Poppy, it must be magic.”

“What must be magic, Titus?”

“How the snakes get out of your pocket.” Busted—and by a 3-year old, at that.

Next, we got back on the trail, and a man and two children passed us. The older of the two kids stopped and sat on a rock while the father and the younger child continued on the trail. Titus, alarmed, stopped dead in his tracks.  “Poppy, why did the father leave the boy behind?”

I tried to explain that the father knew his son would catch up. But no matter what I said, my answer didn’t soothe Titus’ heart.  He wasn’t budging, and he certainly wasn’t going to leave this boy sitting there by himself. But almost as quickly as the boy stopped, he got up and started walking again. Titus followed behind, step by step, but he wasn’t at peace until the boy had caught up with the father. Then, of course, it was time for another snack.

I pray for Titus and his little brother every day. I pray God would protect them from the evils of the world and that at an early age, they will hear and follow His voice. I am not God, and I don’t know what He has planned for Titus, but as a grandfather, I selfishly pray He will hear sooner rather than later.

This morning, I prayed for Titus the Honorable in a different way. I prayed that as he travels the dark forest of this world, God will use him to find those who are lost and walk them back to the Father. Because that, my dear grandson, is the greatest adventure of all.