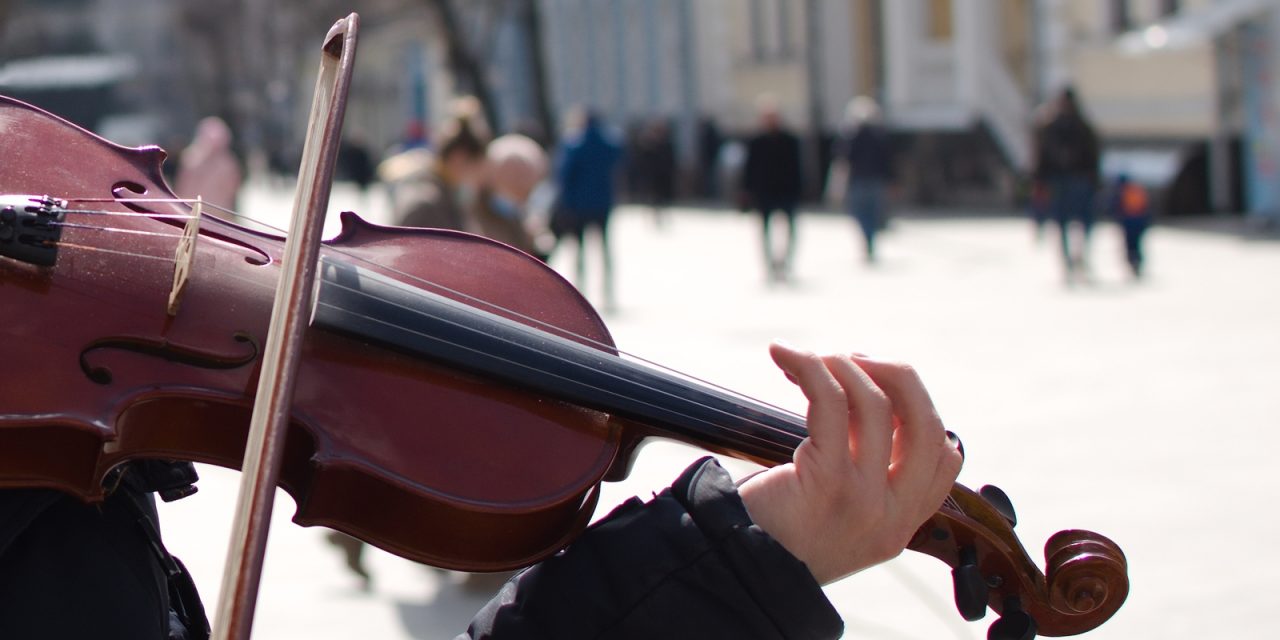 As my wife and I drove by one of those big-box stores (the one that has a big red bullseye mounted on its wall), my wife told me she needed to pick up a few things. I got out of the car and heard music in the air. At first, I thought someone had their radio on, blaring away. But as I listened more intently, I recognized it as a violin playing.

Just the few notes I heard transported me to a time and place in the past when I served in Europe. I can’t even count the number of times I have stepped off a train or a subway, only to be immediately engulfed by music. I would see a violinist with a small speaker and a hat or box sitting in front of them and watch as they played some of the most delicate music, fingers speeding across the neck and bow dancing across the strings.

Deep in the earthly cavern of the subway station, the music would bounce off the walls, invading my ears from every direction. Often, I would stop, watch and listen to these street artists. You could tell they weren’t beginners but had spent years honing their craft. They had practiced gliding their fingers from one note to another thousands of times until each note was so deeply ingrained in their memories that they no longer had to think about what they were doing but just enjoyed playing the music.

I have seen these artists get so caught up in their music that they don’t notice when a train or subway arrives or departs or someone walks by. Their music has taken them to another world, and soon, they have transported me with them. Time stands still; my heart has shifted from the hustle and bustle of life to stop, slow down, listen and enjoy. Yes, I have places to go and things to do, but they can wait. For now, I need this tiny break in life.

In the evening, when you go to parks or the main square, there are a number of these groups scattered about. You find young couples and parents with blankets spread out, lying back and enjoying the entertainment. These artists don’t charge you for their services, but if you have been blessed, there is a box or an open case in which you can drop in a coin or a note as a way to say thanks. As you bend down to place your gift inside, they nod their head in appreciations and go back to their music.

Outside the big-box store, I walked over to the young musician. He had a sign that said he was a father with several children. Because of the pandemic, he had lost some of his income and was playing for some help with his rent. Enraptured by his own music, he stood in the blazing sun, sweat rolling down his face as he entertained the people who walked by.

I opened my wallet, and I had a single dollar bill, which is more than I usually carry. I asked my wife if I could have a few more singles and walked over to place the money in the box. As I bent down, I saw that the musician had laid a metal cross at the bottom to weigh the box down; he was playing as unto the Lord. All gifts he received were placed at the cross.

I am not a musician nor the son of a musician, but isn’t that what worship is all about? It makes us stop in our tracks to listen to the heartbeat of God until it captures us and take us into His presence. In that moment, the hustle and bustle of this life stop, and we are transported into His world, where our souls are refreshed. It could be a hymn, a cloud floating by, a sunrise or holding a newborn baby that makes us stop, and our heart says, “God is here.” We hold onto that thought until our souls whisper, “Come, let us bow down in worship, let us kneel before the Lord our Maker (Ps. 95:6).

Isn’t that what we do on Sunday mornings to prepare our heart to hear from Him? We worship in song and then continue to worship in the teaching of His Word. Don’t get so busy that you don’t have time to stop, watch, listen and enjoy what the Master is doing, because if you take time to pay attention, you will find Him in everything.