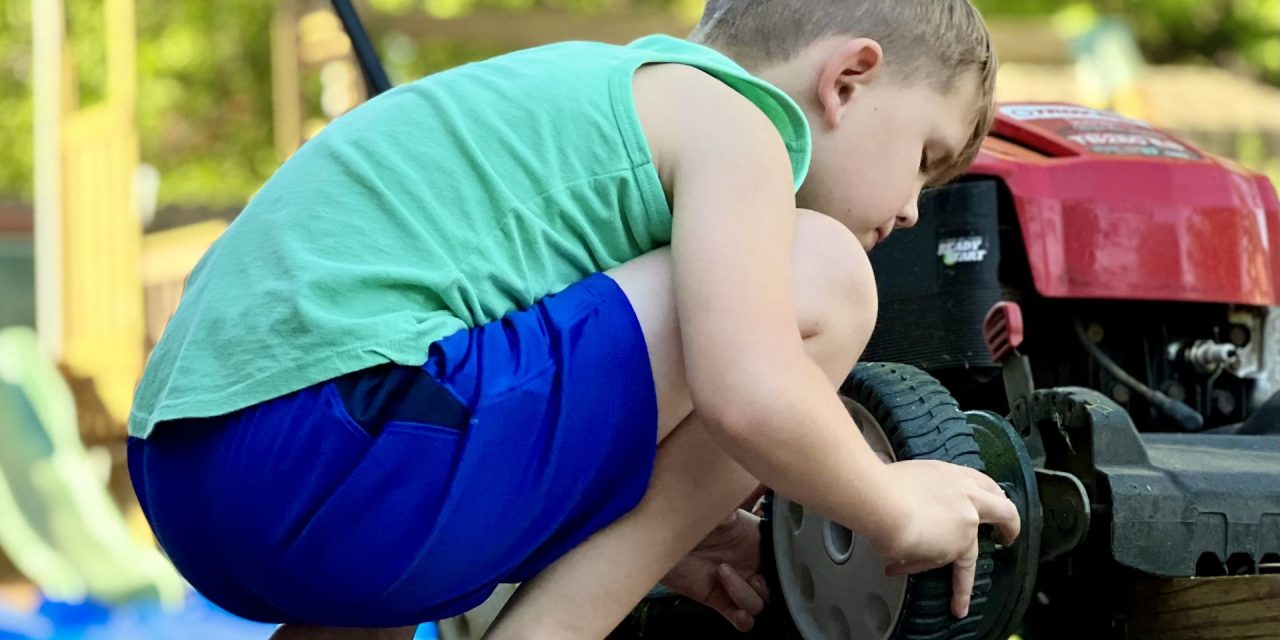 Many years ago, Jay Leno had a segment on his nightly television show where you could send in a word that you had made up. If he liked it, he would read the word and its definition on air.

I tried to get a new word on the show: “purgadoory.” Have you ever locked your car door and shut it, only it didn’t shut all the way? You tried to push it in farther to make it latch, but it didn’t. You tried to pull it open, but it wouldn’t. I call that door’s position — somewhere between the state of locked and unlocked — “purgadoory.” Not bad for a Baptist. 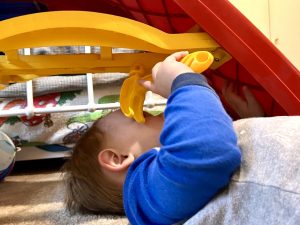 River works on a toy slide, while Titus, above, helps with lawnmower maintenance.

Mr. Leno must not have agreed, because he didn’t choose my word to read on the air. Maybe we should start a campaign to get it into next year’s Webster’s Dictionary.

I did coin a term that is used in my parenting book, “Rite of Passage Parenting: Four Essential Experiences to Equip Your Kids for Life,” which guides parents in how to raise capable, responsible, self-reliant adults.  For years, I had used the term “significant task” to describe a task that demonstrates an individual’s worth to the people he considers important. If the child didn’t perform that task, those people would suffer in some way. For example, if John-Boy Walton had failed to plant the corn, his family wouldn’t have had food to eat.

But for the book, I needed a term to describe the tasks that help children progress toward significant tasks. If a child fails to perform these tasks, no one suffers, yet the tasks build skills for living. I wrestled with this idea for weeks, and while I was working in Mexico, the answer came. One night, I dreamed about being in a simulator to learn to fly a plane. The dream helped me connect the dots: Children learn the skills of their significant task through simple tasks that simulate other, greater tasks. I called these “simulator tasks.”

In our house, we have a small red-and-yellow plastic slide in my grandsons’ playroom. We also have a set of plastic children’s tools that includes a wrench, a hammer and a screwdriver. When the boys come over, they often find me lying underneath the slide, inspecting and pretending to tighten bolts and screws. I first told Titus, our oldest grandson, that we had to do maintenance on the slide to make sure it was safe.

I don’t know how many times I have seen Titus the Honorable lying underneath the tiny slide, knocking around with his tools to make sure it was solid. Later, Cohen the Goodhearted took over the simulator task of plastic slide maintenance, and just last week, it became the responsibility of 3-year-old River the Peacemaker.

As the boys grew, I moved them ever so slightly from simulator tasks to significant tasks. This summer, 8-year-old Titus has the responsibility of maintaining our self-propelled lawnmower. At first, his job was to clean the mower. Now he has moved up to changing the air filter and making sure to remove the spark plug wires anytime we work on the mower. Safety first!

Yesterday, he moved up in his significant tasks when I had him grease and replace the mower’s worn-out front wheels. He got the lawnmower out, removed the spark plug wires, put the front end up on blocks and used a socket wrench to remove the nuts that held the wheels on. He removed the wheels, cleaned the axle, put grease on it and reinstalled the wheels with no help from anyone.  He was confident in his ability to perform this task, and when I thanked him, he acted as though it was no big deal. He was just glad to help.

Teaching your children responsibility and self-reliance is an intentional act. You may remember that I gave this grandson two cans of WD-40 for his seventh birthday. As Titus gets older, I hope I can train his brothers to follow in his footsteps.

There is a principle in parenting called “transfer of learning.” It states that what children learn on a plastic slide, they can transfer to a lawnmower, car or even a jet airplane.

My goal is that in a few more years, I can step back and let my grandchildren take over the maintenance of my lawnmower, my car, my house and my bicycle. Someday, when they have children, I will pass onto them a little red-and-yellow plastic slide. “Train up a child in the way he should go, Even when he grows older, he will not abandon it” (Prov. 22:6, NASB).

Besides, if I keep training my grandsons well, maybe they’ll figure out a way to keep me out of purgadoory.