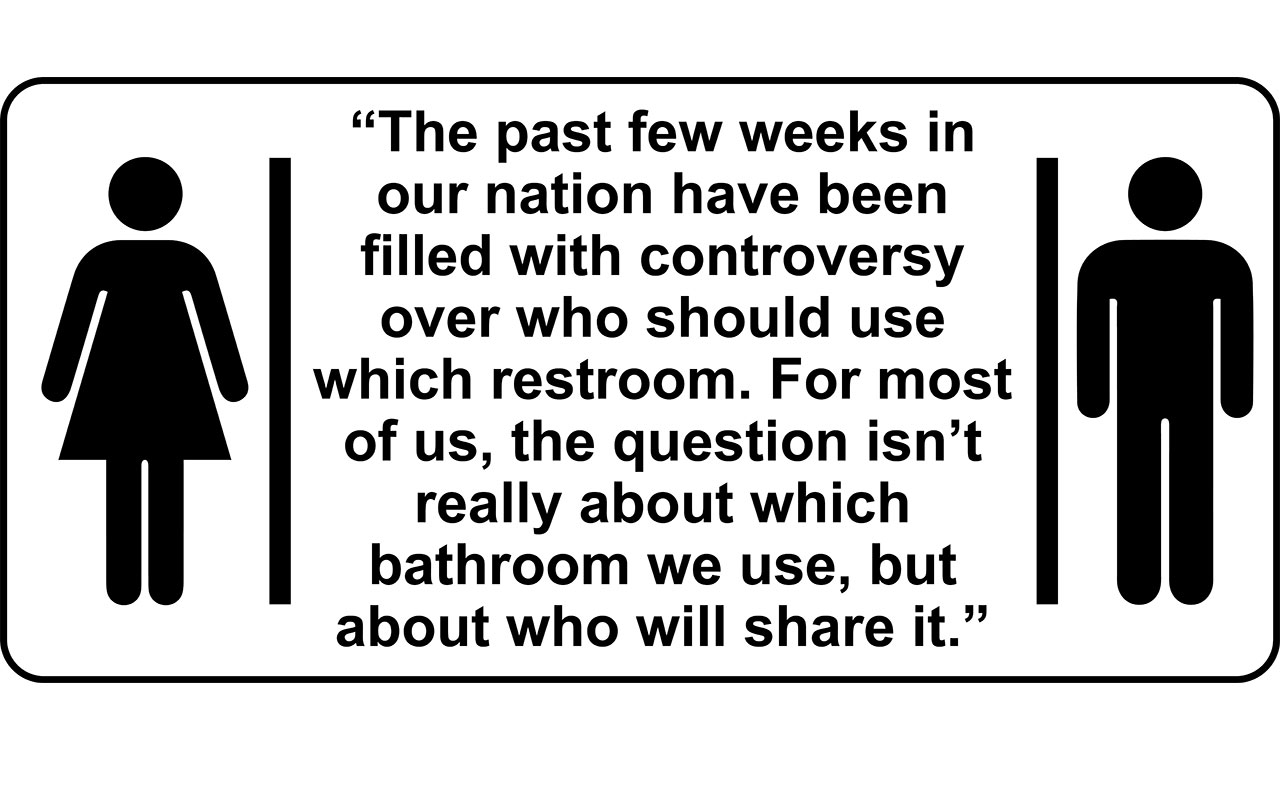 I know an old joke that starts with the question, “How long is a minute?” and ends with the punchline, “It depends on what side of the bathroom door you’re on.”

I consider myself somewhat an expert on bathrooms. As a missionary who has traveled the world, I think I’ve seen and used every type of facility there is, from the squatty potties of Asia to the high-tech toilets of Switzerland. In the jungles, I’ve used the ocean/river view toilets where a rickety structure is cantilevered over a body of water, and you use the gaps between boards to do your business. Maybe someday, I should write a book about my experiences and call it Walker’s Wonderful World of Toilets.

When you study a foreign language, you learn greetings first: “Good Morning,” “Hello,” “My name is ….” But next, you are taught to ask the all-important question: “Where is the bathroom?”

The past few weeks in our nation have been filled with controversy over who should use which restroom. For most of us, the question isn’t really about which bathroom we use, but about who will share it. Not long ago, the Obama administration issued guidelines stating that public schools should allow transgender students to use the bathroom matching their gender identity. This empowers the individual to have the final authority on the use of public bathrooms.

I’m deeply concerned about the younger generation. What does this mean for my grandsons when they’re let loose to operate out in the world on their own? Right now, of course, it doesn’t matter too much. Half the time, Titus the Honorable doesn’t even use the restroom. When he has an urge, he often finds the nearest tree more convenient.

In any case, I see all these changes as mere symptoms of a greater problem.

The world is saying two things:

1. God has made a mistake. The world says God not only made male and female, but also homosexual, transgender, bisexual and more. The only thing wrong with this is that God didn’t say it, nor did his Son. Gen. 1:27 tells us, “So God created mankind in His own image, in the image of God He created him; male and female He created them.” God didn’t create a feeling of sexual identity; He created a physical identity of being a man or a woman.

Thousands of years later, Jesus reaffirmed what His Father said: “’Haven’t you read, (Jesus) replied, that at the beginning, the Creator ‘made them male and female’?” (Matt. 19: 4). To be culturally relevant, we have to change the criteria for sexual identity. Today, the world says it’s not the physical, but feelings that determine an individual’s sexuality. So the way a person feels becomes the ultimate truth, higher than man’s law and equal to “thus sayeth the Lord.”

If my feelings make me equal to God, then what He has assigned, I can reassign. But what if my feelings clash with yours? You feel one way, and I feel another. What can we do?

Just as in a court of law, we submit ourselves to a higher authority. As believers, we yield all personal feelings, preferences, ideologies and philosophies to the Word of God. The bottom line is that feelings are fickle, but God’s Word is final.

2. You should accommodate my sins. When you accommodate someone’s sin, it is no longer sin. It becomes an alternative lifestyle and is socially acceptable.

Since the beginning of time, the world has tried to reclassify sin so it doesn’t sound like sin or look like sin. But here’s the problem: sin still acts like sin. And If we accommodate someone’s personal sin, then we must accommodate the personal sins of others, too.

But did you know our God is an accommodating God? His Word tells us, “For God so loved the world that He gave His one and only Son, that whoever believes in Him shall not perish but have eternal life” (John 3:16). The word “whoever” includes all sinners, liars, thieves as well as those who are prideful, arrogant, evil-doers, sexual deviants … and me, because in my heart, I know that I am the chief of sinners. Yet I found the narrow road that has allowed me to bring my life in line with the way the Creator has created me.

Yes, I am all-inclusive in my invitation to salvation but not in my invitations to share a restroom. In fact, if these Restroom Wars continue, I may stay on the mission field longer, and you might just find Titus the Honorable and me hanging out near a tree.