Rite of passage: Personality plus

As my two grandsons grow older, I am beginning to see a distinct difference in their personalities and temperaments. Titus the Honorable, our 4-year-old, has an incredible vocabulary. He will ask his mother, “Mom, what words don’t I know yet?” And she gives him a new word for the day.

The other day, it was raining, and Grammy commented, “Look, Titus. Our rain gauge says we have gotten four inches of rain today.” 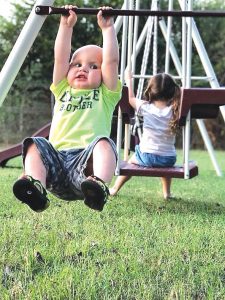 >> photos: provided Cohen the Goodhearted attempting to set a world record for hanging off of a swing set.

Titus replied, “And if we continue to get more, Grammy, it is going to overflow.” Now, what 4-year old- uses words like that? Sometimes talking to him is like talking to an old man in a tiny body. The only way his speech could be more adorable is if he had a British accent.

But Cohen the Goodhearted is the opposite of Titus. Even though he is only 18 months old, he weighs as much as his older brother. Titus has the physique of a gymnast, while Cohen resembles one of the tackles for the San Francisco Giants. Titus floats through the house, whispering like a mouse. We know Cohen is coming by the rattling of the dishes and the booming sounds he makes as he plods his way across the room.

Titus goes around things; Cohen walks through everything. Titus is clean and meticulous, and Cohen, bless his heart, reminds me of Pigpen from the “Peanuts” comic strip. Titus is our conversationalist, and Cohen just makes arrrrrhhhhhaaaa dinosaur noises as he stomps across the floor.

One of the characteristics appearing early in Cohen’s life is tenacity. The dictionary defines that word as “the ability to grip something firmly.” Other words that relate are “determination,” “relentlessness” and “endurance.”

One day, Cohen got hold of his brother’s toy truck. Titus, still only a 4-year-old, said, “That’s my truck!” and went over to grab it out of his baby brother’s hand. No matter how hard his big brother tried, Cohen didn’t let go. Never in the history of childhood has a toy truck been held in such a death-grip. Finally, Titus started dragging the truck—with Cohen attached—around the room.

It was comical. Titus would walk by us, toy truck in hand, with Cohen lying on his back, holding another part of the truck and being dragged along by his brother. They would come through the room again, and this time, Cohen would be on his side or stomach, still clutching the truck.

I don’t how long this went on, but Titus got tired of dragging his not-so-little brother around the house. Eventually, he just let go, and Cohen went off and played with the truck. Cohen the Goodhearted has the spirit of tenacity.

Cohen is at the age where he enjoys hanging off objects—bars on swing sets, railings, Poppy’s arm and sometimes, toy trucks. I am not sure if he has some type of mental clock or not, but watching him, it looks as though he is trying to set a world record. He hangs on until his little face gets bright red, but he is not about to let go. When gravity wins, he will drop to the ground, laughing.

I wanted to share these stories because every child’s personality has a biblical counterpart. What is reflected on earth is mirrored in heaven. Every child needs to find the biblical character who matches their personality. I would suggest you find one character from the Old Testament and one from the New Testament to pair with your child. This is a good way to cast character into your children and then call it forth as you remind them of the biblical counterpart.

The study of these biblical personalities will help children relate to their own strength and weakness. I am hoping Titus the Honorable and I one day can have conversations about King David and the Apostle Peter. Learning about these men will help him develop his character and guide him through life.

And I want to talk to Cohen the Goodhearted about Joshua and John the Baptist. If he will quit “arrrrrhhhhhaaaa”ing long enough, I will tell him about these two men who also had the spirit of tenacity. Joshua never gave up on the promised land, and John the Baptist was described as a “wild man” who prepared the way for Jesus.

But as you teach your children and grandchildren about the biblical personalities, don’t forget to teach them about the life of Christ. He is the Alpha and Omega, and everything is contained in Him. And God has given to each child their personality and character for His glory. “’For I know the plans I have for you,’ declares the LORD, ‘plans to prosper you and not to harm you, plans to give you hope and a future’” (Jer. 29:11).