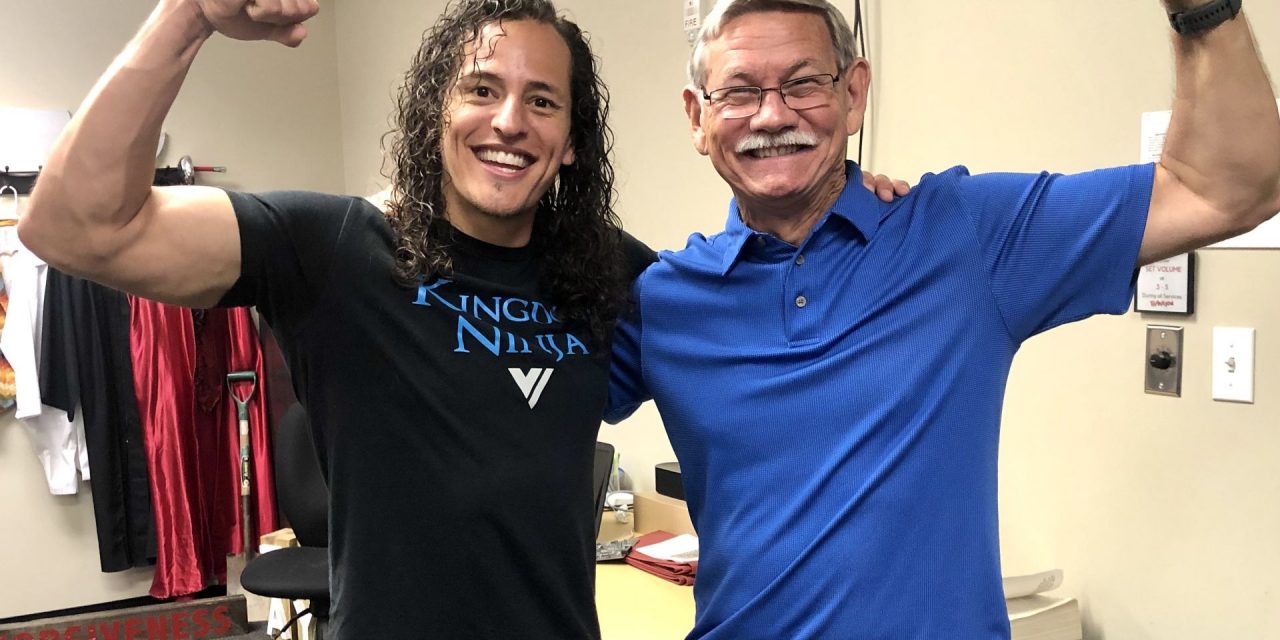 I recently got a call asking if I would join Daniel Gil (pictured with Walker above) at an event in San Antonio, Texas. I am a huge fan of Gil. If you’re not familiar with him, he is the reigning champion of the televised contest called “American Ninja Warrior.” He was on the show for six seasons before he overtook the other contestants and became the current champion.

“American Ninja Warrior” tests competitors’ talents and abilities via an obstacle course. I have watched as these men and women climb, fly and run through the obstacles placed before them. One of my favorites is called the Warp Wall, and there are two of them. If you look at them from the side, they look like the letter C. The smaller wall is 14 1/2 feet high, and the Mega Wall is 18 feet high. The object is to run up the curved wall and, part of the way up, jump to catch the top of the wall. If you can conquer the Mega Wall, you receive a $10,000 bonus. Only two people have conquered the walls back to back, and Gil is one of them.

Many of these contestants have stage names they perform under. There’s the Cowboy Ninja, Island Ninja and Real-Life Ninja, but Gil goes by the moniker of “Kingdom Ninja.”

When they called me to be part of this event in San Antonio with Gil, I had to let them know I had doctor’s orders that I couldn’t participate in anything with the word “up” included. I am not allowed to do pullups, situps, stepups or any other physical challenges that contain the word “up.” If I did, I might throw up.

I informed the coordinators that I could do anything that contains the word “down”: sit down, lie down, roll down, step down and even boogie down as needed. But all they wanted me to do was to speak at the event.

When I arrived, the hosts took me to the Green Room to meet Gil and his wife, Abigail. We talked about his winning season and his name, Kingdom Ninja. Gill is a devoted follower of Jesus Christ; he wants to share His name and message as far as he can. He is the worship leader at his church and loves to minister through music. Everything he talked about began and ended with Jesus. We hit it off—the older warrior and the younger one sharing our stories of Jesus ministry.

Gil discovered at a young age that he could climb and jump with the best of them. Because of this ability, he started working at a gym where the owner was training for “American Ninja Warrior.” Gil tried out for several years and didn’t make it, but he continued to discipline his body and train for hours each day, pushing himself to be stronger and faster.

He did all of this for one reason: so he could have a bigger platform to share Christ. Daniel, Abigail and I prayed together and encouraged each other. By the end of the day, we saw 97 people put their faith and trust in Christ. I could share a lot more about my time with Gil and how God has used his skills to travel the world sharing Christ.

I looked up the word “ninja” in the dictionary, and there were lots of definitions, but the informal one was “a person who excels in a particular skill or activity.” When I asked Gil about choosing the word “kingdom” to go with “ninja,” he quoted Matt. 6:33: “But seek first His kingdom and His righteousness, and all these things will be given to you as well.”

Gil saw his skill sets as not only being the fasted and strongest on the course but that he would be equally equipped in sharing the love of Christ with the other ninjas, producers, employees of the show and people in the cities where he is invited to perform.

But shouldn’t we all be “kingdom ninjas”? Isn’t that what we are supposed to do: Equip our children to excel in sharing the message of Christ and then release them upon the world? Didn’t Jesus commission us to go and make disciples of all nations? God has given everyone a platform to represent Him. It might be in your school, your workplace or your neighborhood.

Now you know why I am a big fan of Daniel Gil. He excels in his sport and in his ability to capture the moment to share Christ. Daniel is the Kingdom Ninja, I am a kingdom ninja, and I hope you are raising up a generation of kingdom ninjas!