I have written these articles from the four corners of the globe. No, it isn’t some part of a grand scheme to become a roving reporter, writing from third-world countries, jungles or even a small villa somewhere off the beaten path. Truth be told, I had to write my article from these places because I was too lazy to write it before I left. I have delayed telling you this, but one of my weaknesses is procrastination. It’s ironic.

Today is one of these days, and I am writing from the shores of the Sea of Galilee. Actually, it’s not a sea but a lake. Traveling here and finding that out is sort of like driving two days to Disney World only to discover parking-lot amusement rides. It’s ironic.

I guess if we called it the Lake of Galilee, we would have a harder time believing Jesus could have performed miracles there. Which is harder to stop: a storm on a lake or on a sea? I’ll let you answer this one.

This is not my first visit to the Holy Land, and I hope it will not be my last. In fact, I wish every one of you could come and experience the land that nurtured our Savior. Going to Israel is like going to the ophthalmologist. As you sit there, the doctor starts flipping through a set of lenses, asking you which is clearer until you see perfectly. In this case, though, the lenses have names like Jordan, Bethlehem and Jericho. 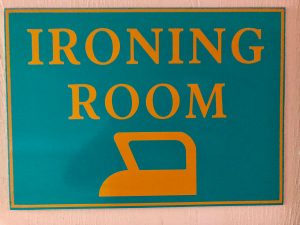 As I listen to our guide describe in detail these places I have only read about, my understanding of the Scriptures become clearer, and I am even more in awe about how our faith came to be. But along this journey, I find some humor, too. First, our hotel had an antique sign posted: “Ironing Room.” I told my son it was probably here during Jesus’ time. I’m pretty sure he rolled his eyes when I said, “It’s ironic.”

But I was blessed by hearing my son teach the Beatitudes on the Mount of Beatitudes. It was a deep spiritual moment: The child who gave his mother and me the biggest challenges growing up is now speaking into the hearts of those around him. Even our Jewish guide was moved by his message.

As you walk up to the chapel on the Mount of Beatitudes, you see each beatitude beautifully displayed along the path for you to reflect on Jesus’ words. Off to the side of the main path, we saw a little trail next to a beautiful fountain.

A plaque on the fountain was inscribed with John 7:37, which reads, “Let anyone who is thirsty come to me and drink.” But right beside the fountain was a big red sign with bold letters that said, “Do not drink the water.” If you are thirsty, you had better go somewhere else. It’s ironic.

Israel has lots of little ironies like this. But the one that stuck out most was when we went to the Jordan River and saw the place where John the Baptist baptized Jesus. It’s a small stream that also defines the border between Jordan and Israel.

Overlooking this holy site are Israeli soldiers with automatic rifles and grenade launchers attached to their barrels. And just a few feet away, on the other side of the stream, are the Jordanian guards with their rifles.

One could easily be arrested for trespassing if they ventured more than halfway across from either side of this small body of water. Here, in the place where the Prince of Peace was born, educated, unfairly tried, crucified, buried and resurrected, we find a marked lack of peace. It’s ironic.

Israel is also a place where we see a great contrast between the Jesus of the New Testament and the commercialized Jesus. People here have had no trouble turning Him into a Middle-Eastern Mickey Mouse, with His image plastered on everything from T-shirts and shopping bags to shot glasses and keychains. Vendors chase you down at every turn, trying to sell you a cross or a bottle of holy water. It’s ironic.

But then I remember that Israel isn’t so much different than our country. We have also commercialized Christmas, Easter and just about anything else that has to do with Him. But for those who will truly seek to find the real Jesus, He will show you His ways.

The simple life Jesus modeled and called us to live out was to love God and love one another, take care of the widows and orphans and put Him first in everything we do. Somehow, we’ve made it much more complicated. I don’t know what else to say except—it’s ironic.