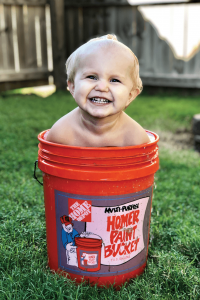 The other day, I went to help my son Caleb paint the inside of the previously-owned home he just bought. I enjoy these tasks, as they give us some quality time together. But this day, I was particularly excited because I got to hang out with Titus the Honorable and Cohen the Goodhearted.

Cohen came by as I was climbing up the ladder and watched as I meticulously cut in the living room ceiling. He yelled up, “Good job, Poppy, goooood job!” I smiled and thanked him for his words of encouragement.

Thirty minutes later, he came by and again stood watching me as I cut in around the window trim. Again, I heard his little voice: “Good job, Poppy, goooood job!” I am not sure what criteria a 2-1/2-year-old uses to evaluate a painting job, but Cohen has high standards.

Next, I was standing on the counter beside the stove, leaning over the cabinets, reaching out to paint the strip of wall between the top of the cabinets and the ceiling. I am not an interior decorator, nor the son of one, but take it from someone who has seen the dark side: If you ever get a chance to put cabinets in your kitchen, make sure you get the kind that go all the way to the ceiling.

Two thousand years ago, people asked the question, “Can any good thing come out of Nazareth?” (John 1:42a, NASB). Today, it would be translated, “Can any good thing reside on the top of a kitchen cabinet?” The answer is no. Looking on top of your kitchen cabinets is not for the faint of heart, but before you paint, you need to clean away years of cobwebs, greasy grime, greasy dirt and greasy grease.

I was up to my elbows in rags, grease and dirt when I looked down and saw little Cohen staring at me. I am beginning to see characteristics in him that are similar to my own. We both have the gift of watching people work. “How’s it going down there, little buddy?” I asked.

Next, I moved into the two-story entryway. Standing on the ladder, one floor up, I saw Cohen coming again to check on me as though he now had the official title of building inspector. “How does it look from down there, Cohen?”

Maybe I should change his name from Cohen the Goodhearted to Cohen the Encourager. I know he has learned this skill from his parents and grandparents. Anytime he is working on something, we keep letting him know, “Good job, Cohen, good job.”

Cohen, I appreciate you coming to check on me. As you stood there watching over me. You reminded me of some other watchers I know about. They were probably a little older than you and had the job of watching over the sheep at night.

Being a watcher is an important job, for at night, the wolves or other predators try to sneak in and kill. Ever diligent, their eyes piercing the darkness, these watchers stayed alert and stood guard, checking on any unusual noise or movement.

When the sun broke over the horizon, the men would come and take over, moving the sheep to a greener pasture. If all the sheep were accounted for, I bet those shepherd boys heard, “Good job!”

One night, as the shepherd boys were watching over the flock, an angel appeared in the dark sky, surrounded by God’s brilliant glory, and made an announcement:

“’Do not be afraid. I bring you good news that will cause great joy for all the people. Today in the town of David a Savior has been born to you; He is the Messiah, the Lord. This will be a sign to you: You will find a baby wrapped in cloths and lying in a manger’.

“Suddenly a great company of the heavenly host appeared with the angel, praising God and saying,

Cohen the Goodhearted, this announcement given to the shepherd boys is also for you. Keep watching, my little buddy, for this very Jesus who came to the shepherds wants to come to you as well. I pray you will be on the watch for Him, and when He speaks to you, your heart will take Him in. And at that point, all Poppy will be able to say is “Good job, Cohen, good job.”