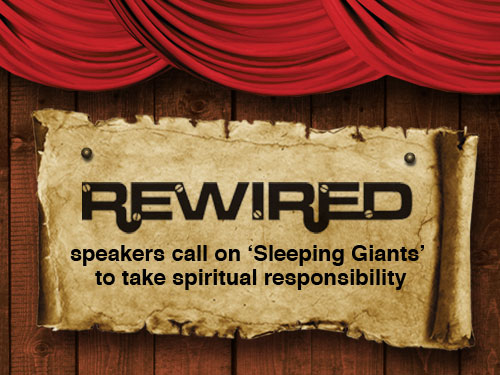 DAVIS—For far too long, men have abdicated their role as the spiritual leader of the home, and the time is now for them to step up and accept that responsibility, said speakers at the Rewired state men’s retreat at the Falls Creek Baptist Conference Center, April 27-28.

“You are a leader, whether you like it or not,” declared Friday night’s keynote speaker Tommy Bowden, former head football coach at Tulane and Clemson universities.

Bowden, 57, the son of Florida State   icon Bobby Bowden, has been married for 35 years and spent 32 years in coaching himself, 12 years as a head coach. He spoke of the qualities it took to be a leader, as one who often worked between 90-105 hours a week as a head coach.

Bowden said it is all in the C-A-R-D-S: Commitment, Accountability, Responsibility, Discipline and Sacrifice.

The coach said while he was saved at age 12, he realized at age 42 that he had never read the Bible through in its entirety.

As to accountability, Bowden said “God will hold us accountable to the opportunities we have to serve others and share the Gospel.”

He stressed that men have “a responsibility to care for their family and to represent the Lord Jesus Christ with honor in everything they do.”

He challenged the men to surround themselves with godly counsel to help them remain disciplined when Satan attacks.

“We must be different from the world, and we must never compromise God’s Word,” he declared.

The final element, sacrifice, is the hardest, Bowden said.

“God doesn’t want your ability, He wants your availability,” he said. “Nothing good comes easily. The Christian life was tough 2,000 years ago, and it is still tough today.”

Richard Land, president of the Southern Baptist Convention’s Ethics & Religious Liberty Commission, exclaimed as he looked out over the crowd of men assembled in the Tabernacle Saturday morning, “this is the answer to what ails America. There is a hole in America’s heart and the hole is an absence of godly male leadership in the home, and the church and the community.

“We are suffering from a terrible deficit of men taking up their responsibility in fulfilling their destiny that God has for them to lead their families, their churches and their country.”

“The one thing that would eliminate more poverty than anything else we could do is for fathers to marry the mothers of their children and to stay married to them.”

He then honed in on what he feels is a part of the problem.

“Too many Baptists have been quoting the Bible by the yard and living it by the inch,” he proclaimed.

Land encouraged the Rewired attendees to step up and be the spiritual leader in their home. He challenged them with this question: “Are you the kind of husband you want your daughter to marry?”

And, he urged them to remember that they are “writing the job description every day for your daughter’s husband, and the kind of father your son is going to be.”

Recalling that Japanese Admiral Isoroku Yamamoto feared the attack on Pearl Harbor on Dec. 7, 1941 had awakened a “sleeping giant” in America, Land said he hopes and dreams that today’s American Christians will be like awakened giants and resolve to “take their country back to the God of our fathers.”

One of the post-event sessions was one for pastors and men’s ministry leaders titled “Sleeping Giant, Releasing the Power and Promise of Men into the Pastoral Vision,” led by Kenny Luck, men’s pastor at Saddleback Church in Lake Forest, Calif, where 8,000 men are connected weekly in small groups.

The essence of Sleeping Giant is about “serving the local pastor by helping him to activate his men around the vision God has called him to fulfill,” Luck says in the book’s introduction. He added that it’s essential to produce healthy men and leaders for the pastor to fulfill the vision God has given him.

“He cannot do it alone and he needs you!” he concludes.